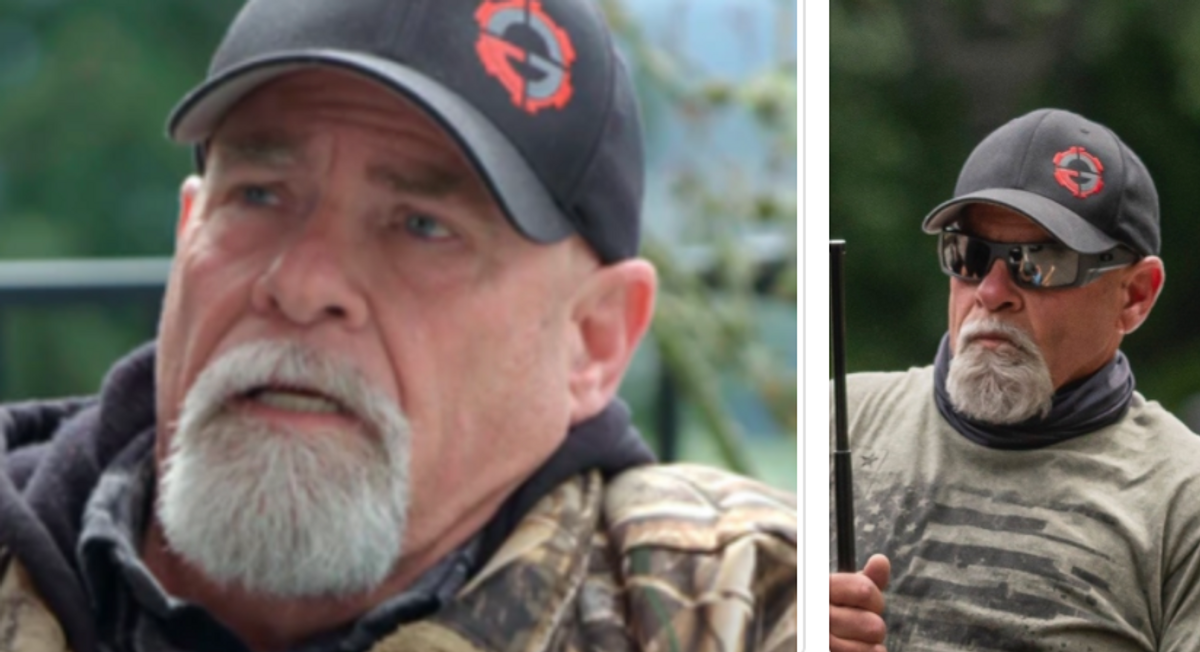 Jeffrey Grace, who faces federal charges related to his involvement in the Jan. 6 breach at the US Capitol, appears to have taken part in a confrontation with left-wing counter-protesters in Portland, Ore. over the past weekend while awaiting trial.

Antifascists showed up at Tom McCall Waterfront Park on Aug. 7 to disrupt a prayer and worship service led by Artur Pawlowski, a controversial Canadian pastor who has in the past claimed God's unhappiness with homosexuals caused a 2013 flood. The Portland Tribune reported that dozens of black-clad antifascists hurled smoke grenades and appeared to dismantle the public-address system for the Aug. 7 religious event in Portland. At the conclusion of the event, the newspaper reported, right-wingers armed with paintball guns, batons and other weapons who had gathered to support the religious event fired a paintball gun in response to an onslaught of pepper-spray from counter-protesters attempting to force them out of the park.

Jeffrey Grace, a Washington resident who lost his job as a long-haul trucker as a result of his involvement in the Jan. 6 breach, appears to be among a group of men seen in a photo departing the Aug. 7 rally. Nathan Howard, a freelance photographer, tweeted the photo depicting seven men piling into the back of a pickup truck, along with the descriptor, "Far-right extremists leave Portland after clashing with anti-fascists, Saturday Aug. 7, 2021." Grace can be seen standing next to the truck's cab, while holding a retractable baton while wearing a black cap with a distinctive red and gray insignia on the left side. A photo of Grace published by KGW shortly after his arrest for the Jan. 6 breach shows him wearing the same hat. Additionally, the man's facial hair in the two photos is shaved in the same manner — a white goatee with the clean-shaven cheeks.

Under his conditions of release, signed by US Magistrate Judge Robin M. Meriweather on Feb. 12, Grace is prohibited from traveling outside of Washington state. Under Judge Meriweather's order, Grace must notify his probation officer "in advance of all travel within the continental United States." As part of Grace's conditions of release, he is also ordered to refrain from violating "federal, state or local law while on release."

The Portland Tribune reported that no arrests were made during the clash in downtown Portland on Aug. 7, and that the extent of law enforcement intervention was a squad car whooping its siren as the two sides engaged.

Grace could not be reached for comment by Raw Story, but he confirmed his presence in Portland on both Saturday and Sunday to Oregon Public Radio. The outlet reported that Grace could be seen on video on Saturday holding what looks like a baton while standing with a group of people shooting paintball guns at counter-protesters.

Previously, Grace has admitted to lying to the FBI by telling an agent that he and his son, Jeremy, got separated before he entered the Capitol on Jan. 6. In fact, as detailed in an affidavit subsequently filed to support charges against Jeremy Grace, agents retrieved a selfie video from the trash folder on the son's iPhone "that depicts Jeffrey and Jeremy inside the Capitol Rotunda." In the video, according to the government, Jeremy Grace says, "Just made it into the Capitol here. Oh yeah, oh yeah." Jeffrey Grace says, "It gets no better than this."

Jeffrey Grace acknowledged his deception in a June 14 interview with podcaster Todd Cotta.

"Let's share right now, because he has been arrested as of 10 days ago, because — I want to protect my son," Grace told Cotta. "I said I separated from him. So, now I have another charge that's going to be coming on me for lying to the FBI, which is a felony."

Notwithstanding Grace's prediction, to date prosecutors have filed no additional charges against him for his admittedly false statement regarding the events of Jan. 6.

Bill Miller, a spokesperson for the US Attorney's Office for the District of Columbia, which is prosecuting Jeffrey Grace's case, declined to comment on his apparent involvement in the confrontation in Portland this past weekend or his admission that he lied to the FBI.

It is also unclear whether Grace notified his probation officer that he was traveling to California in June when he granted an interview to Cotta.

Grace told Cotta at the time that he learned about an event in the Sierra Nevada foothills to celebrate Donald Trump's birthday by following a popular far-right YouTube streamer in California.

"I read on their deal they had a 'Happy Birthday, Donald Trump' flag day deal going on up at Bass Lake," Grace recounted. "I'd never been to Bass Lake.' So, I grabbed my little dogs and away we go."

"You drove all the way down from Washington?" Cotta asked.

In a previous interview with Raw Story in late June, Grace said he was unrepentant about his actions on Jan. 6.

"Am I sorry I lost my career? Of course," he said. "People were very frustrated and still are. It's a sad situation in our country…. By God, this is the best country in the world, and that's what I'm standing for."

In video of the confrontation in Portland this past weekend, some of the right-wing participants can be seen wearing Proud Boys gear and paraphernalia, but an unidentified leader from the Portland chapter reportedly disavowed the group, telling reporter Zane Sparling they were "unknown individuals… mimicking" official members, who were out of town doing a graffiti cleanup.

On Jan. 6, before entering the Capitol, Jeffrey Grace and Jeremy Grace marched with the Proud Boys. Led by Ethan Nordean of Washington state and Joe Biggs of Florida, who each face conspiracy charges related to the Jan. 6 breach, a large group of Proud Boys and supporters converged at the entrance to the northwest path to the Capitol, near the Peace Monument, before Trump concluded his speech at the Ellipse. Joined by others, the group led by the Proud Boys was the first to breach police lines and enter the Capitol grounds.

Speaking with Cotta in June, Jeffrey Grace praised the Proud Boys as "civilians" who "have been taking it upon themselves" to act where law enforcement is perceived as failing to crack down on Black Lives Matter and antifascist protesters.

"And you know, they're willing to be men in America," Grace said. "And unfortunately, the law enforcement's hands are tied so much, so civilians have been taking it upon themselves, whether it's the Three Percenters, the Proud Boys, whatever. And are they doing it effectively? Maybe not so much. But you know what? Their heart is in it for the right reason."

CORRECTION: This story has been corrected to reflect that Jeffrey Grace faces misdemeanor, not felony charges related to his actions at the US Capitol on Jan. 6 and that Grace is holding a retractable baton, not a two-way radio in a photo of him leaving a confrontation with antifascists in Portland, Ore. on Aug. 7.