Loeffler, who lost her race overwhelmingly, posted a meme of Dr. King, but many responded by recirculating the photo Loeffler took with a white supremacist and KKK leader. 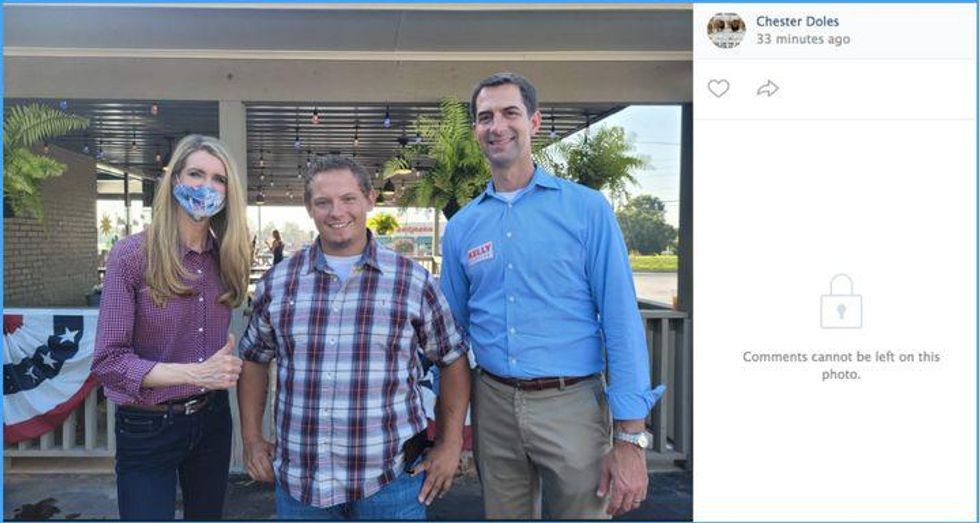 When the photos were posted, Loeffler's campaign claimed it was "a fake news attack from the totally discredited Southern Poverty Law Center and their friends in the liberal media."

See how others commented on Loeffler's hypocrisy below:

Don't worry I'm sure she did the obligatory MLK post to social media today just to pretend for a second she isn't racist trash.
— Scott (@ScottM8528) January 18, 2021

Uh uh, no, you don't get to slander his beliefs every day, and then on the one day dedicated to remember him, your praising him, and the work he did for unity..... you played a roll in almost destroying this country. Shame on you, you don't get to invoke his name.
— Brian Rupp (@BrianRupp16) January 18, 2021

It's unreal how racists expect that a single day offering of comments absolves them of their racist rhetoric and actions for an entire year...
— tRump Hater (@HateStupidPeps) January 18, 2021

Are you? I don't think Dr King would approve of your attempts to throw out tens of thousands of African American votes. Just sayin'
— Ernie C (@gaydadinWiscon) January 18, 2021

So how are you honoring MLK Jr. on this day of service? Or is it just words that you spout and now your done? I like people who back their words with actions.
— Laura Escobedo (@lauri64) January 18, 2021

@afbrat0123 @SenatorLoeffler it must have been hard for her not to say the radical liberal martin luther king😉
— TangoBravo (@TangoBravo) 1610982850.0

So thankful that someone with true values, morals and vision was elected to represent us and not someone who will post something like this on MLK day and then live against these words the other 364 days. Your attacks on Warnock during your campaign were attack on MLK's very words
— my_antiracism_resource (@MyAntiracism) January 18, 2021

You and your ilk tried to nullify Black voices. We will never forget.
— Fortuona Paendrag (@lemtaz) January 18, 2021

You can't campaign with white supremacists and then quote Dr. King like that. When you gonna take the “Senator" off your Twitter handle?
— President-Elect Biden (@JefeCooper) January 18, 2021

Absolutely not okay for you to post anything today
— Deborah Drinkwater (@debdrinkwater) January 18, 2021

it's cute that you think you can just go back to your old life and act like the last few months never happened
— Four Freedoms Total Landscaping 🌋 (@pleizar) January 18, 2021

The lady who cozied up to white supremacists wants to talk about MLK.
— Lollipop Hurricane (@purplepickles12) January 18, 2021

You could've not attacked his church as radical marxists or whatever
— Sasha Fierce (@SashaLittlemy) January 18, 2021