Trump's embattled 'cable-news' lawyers are getting what they deserve: legal experts 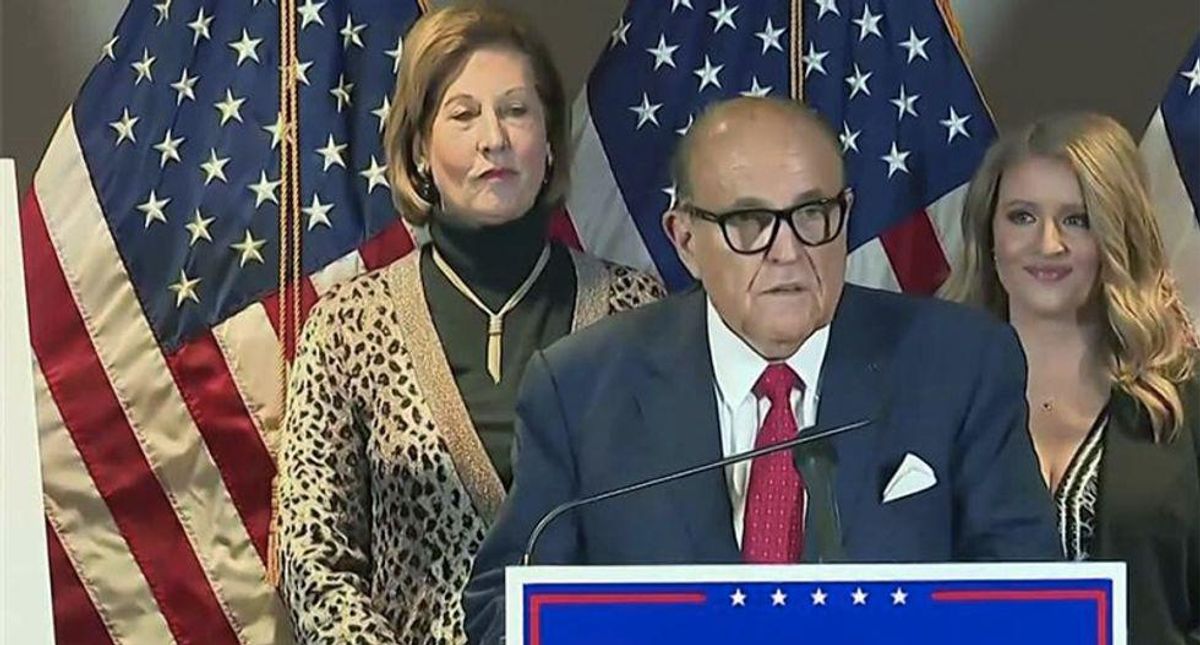 In a biting column for The Atlantic, attorneys Bradley Moss and Janet Molinaro wrote that the attorneys who stepped in to litigate Donald Trump's election fraud claims are getting what they deserve as they face sanctions, massive fines and likely disbarment depriving them of their livelihoods.

Discussing "Sidney Powell and her merry band of 'Kraken' lawyers" and later adding former New York City Mayor Rudy Giuliani to the mix -- the two attorneys bluntly stated, "Today, they face punishing financial and professional consequences, including the potential loss of their license to practice law. This is exactly what should happen."

The authors cite the ruling on Wednesday by U.S. District Court Judge Linda Parker, which they called "must-reading" for future lawyers when it comes to understanding legal ethics.

Writing, "The ruling addressed in clear terms the difference between 'cable-news lawyering' and the actual practice of law," Moss and Molinaro then added, "Her ruling outlined how Powell's team had relied upon affidavits riddled with baseless speculation and accusations contradicted by existing public evidence to advance their claims seeking extraordinary relief that would have effectively nullified the votes of millions of Americans in Michigan."

"The election was not stolen. There was not widespread fraud. You do not have to take our word for it. Look at the countless lawsuits littering dockets across the nation brought by Trump and his allies. They all failed in the end. Taxpayers were required to foot the bill for multiple recounts, and still the election results stood, including in those done by Republican state election officials," they wrote before turning to the case against Giuliani.

"Rudy Giuliani, once known as 'America's mayor,' has had his law license suspended in New York and the District of Columbia, directly as a result of his role in pushing Trump's false election-fraud claims in the courtroom. Likewise, Judge Parker's opinion is a clear and unequivocal rejection of the method by which Powell and her legal team pursued litigation in Michigan," they explained. "In a courtroom, lawyers are ethically bound to do more than dump a far-fetched legal theory on a judge's lap simply because it fits their (or their client's) political narrative."

Writing that every lawyer in the multiple cases that have been thrown out should have known better, they applauded the courts for seeing through their attempts to bluff their way to victory.

"Those lawyers now must pay significant legal bills as a form of restitution, complete legal-education retraining, and, perhaps most important, face potential disbarment by the states in which they are licensed to practice," they wrote. "That's the cost of masquerading conspiracy theories as serious legal claims, and that is as it should be. As has been made clear since last November, courthouses—and the fundamental rules of procedure upholding their marbled corridors—can form the final line of defense between our hallowed democratic ideals and those who would see them destroyed in favor of one of the most dangerous attempts at a power grab in this nation's history."