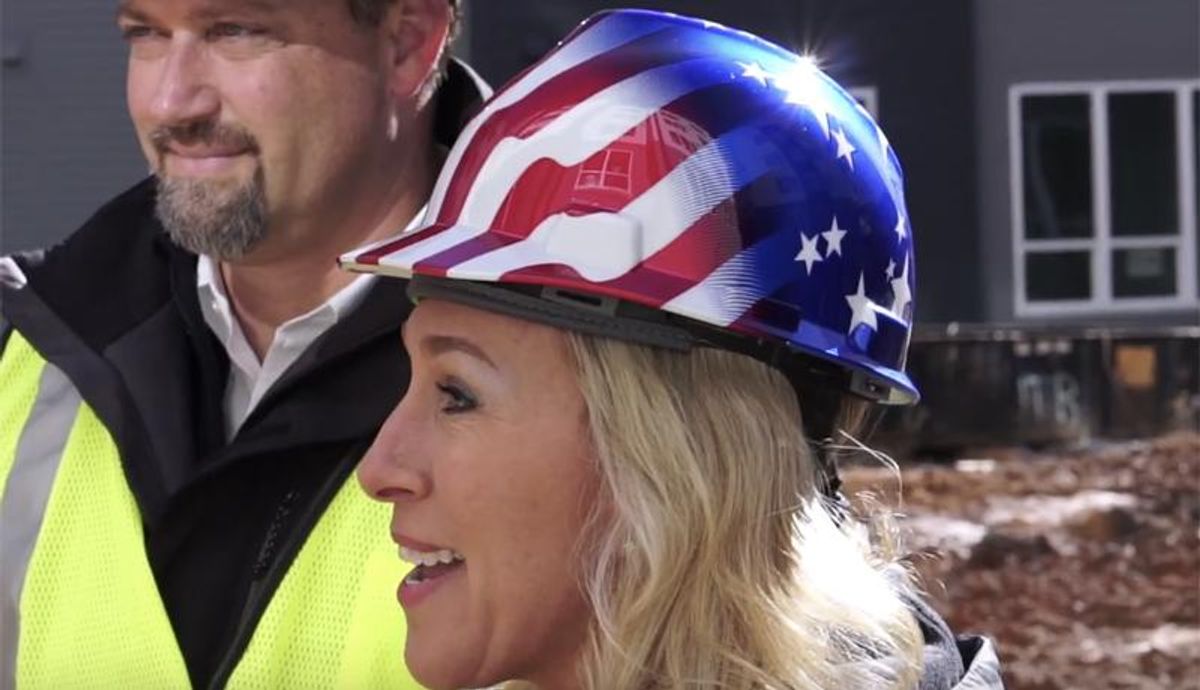 The AJC reports they found little to back up her claims of running the construction company -- Taylor Commercial -- that she and her husband Perry Greene bought from her father in 2002.

According to the report, "One of her campaign videos last year showed Greene and her husband, Perry, walking around a construction site together, surveying the work. She wears a hard hat emblazoned with the red, white and blue stars and stripes of America. He wears a hard hat with a UGA Bulldogs logo. In one shot the couple, with her father, reviews what looks like construction documents in an office at the company's Alpharetta headquarters," before adding, "She is not listed with other executives on the company's leadership pages. Greene is not featured in the archived pages where her father and husband are the central actors in the company's story."

According to an examination of business records, "Perry Greene acquired full ownership of the company in 2006 and the business grew exponentially after that, his bio says. It says he has a wife and three children, but doesn't mention Marjorie by name or say she's been involved in the company. State records over the past two decades are consistent with the company's archived web pages. The company's July 2006 annual registration lists Perry Greene as CEO, replacing his father-in-law in the position. The registration also lists him as CFO and secretary. Over the past 15 years, Taylor Commercial's annual filings often listed Perry as the only officer of the company."

The report notes that Marjorie Taylor Greene only appeared as the CFO 2008 to 2010 before her name disappeared.

According to Ken Blankenship, whose company did rehab work with Taylor Construction in 2012, "If Marjorie Taylor Greene walked in front of me then I would not have known her."

What is notable about the report is the fact that the company owned by government-hating Taylor Greene and her husband had no qualms about cashing in on building taxpayer-subsidized low-income housing.

"Taylor Commercial for years has marketed its expertise in Low-Income Housing Tax Credits," the AJC report states adding that the company bragged about the work they were taking in.

"The [2013 company blog] post said $16 million in credits would be available in Georgia that year and encouraged developers, owners and property managers to utilize the company's expertise to tap into the credits. The company said it had more than four decades of construction experience in low-income housing," the report states. "The $9.5 billion annual LIHTC program grants tax credits to help rehabilitate or build affordable rental housing. Developers often sell the credits to private investors to obtain funding for their projects, which must set aside a portion of units for lower-income tenants."

Describing the windfall that comes with the credits, attorney and low-income housing advocate Michael Daniel explained, "It is loosely described in the trade . . . as a cascade of cash."

The AJC adds their investigation "has found the company linked to low-income multifamily housing construction projects across the southeast, many that utilized the tax credit, according to a review of its portfolio listed online, government documents and other records," before adding, "Taylor Commercial says it has renovated more than 40,000 multi-family units and completed more than 100 renovations, with costs ranging from $100,000 to more than $5 million. Its portfolio of projects displayed on its website over the years has shown a mix of market-rate and affordable housing."

The report does note that Taylor Greene admitted in a 2015 interview that she had mostly withdrawn from the business to concentrate of her training and running her own CrossFit gym, saying, "My husband was mostly doing that because I was doing the gym."

You can read more here and see the video where Taylor Greene promotes her business acumen below: