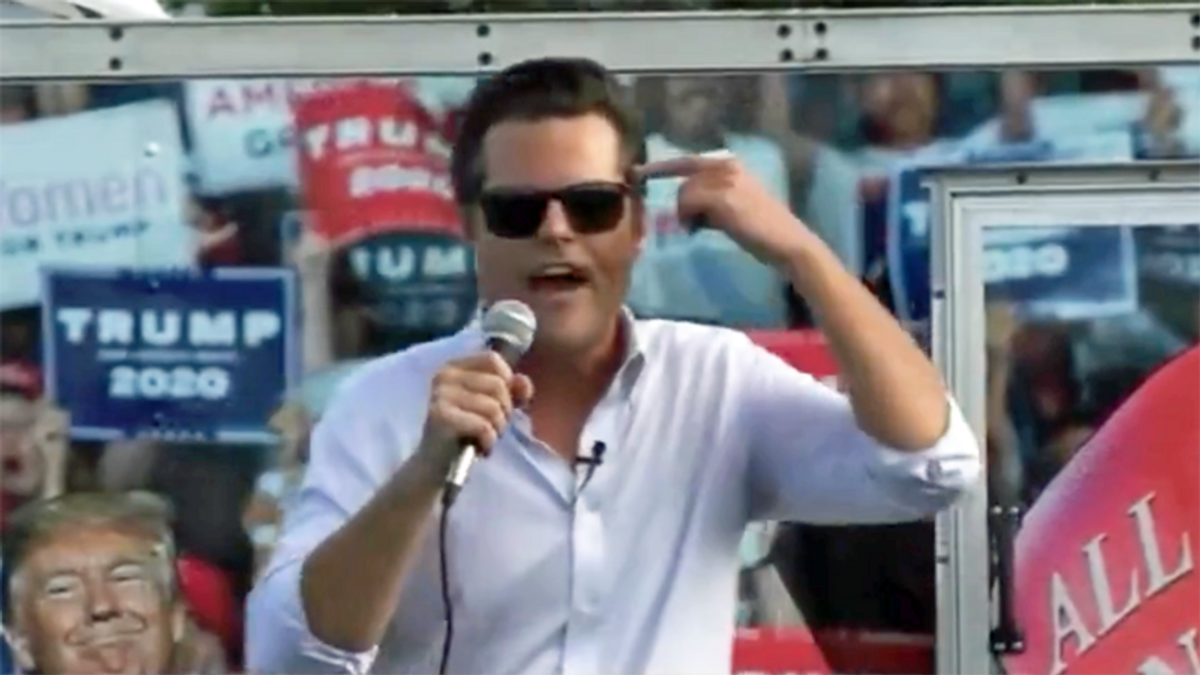 Gaetz spoke Saturday in Brevard, FL at the same time it was announced that Florida was setting its new record for COVID-19 cases during the pandemic. The same guy who infamously wore a gas mask in Congress to ridicule the seriousness of the coronavirus in May 2020 was at it again.

"As Gaetz discussed vaccines and mask mandates, he mocked the COVID-19 delta variant, which caused Brevard County to break a COVID record this past week. He said he had the "Florida variant," which gives him the skills of "hunting, fishing and hugging your family."

As if that wasn't enough of a knee-slapper for a room full of followers who photos showed to be largely wearing no masks, Gaetz added this insight about the nation's leading infectious disease authority:

"He then called Anthony Fauci a "sniveling little twit," and criticized him for "flip-flopping" on the CDC's recommendations for facemasks and social distancing, Florida Today reported.

Gaetz also rattled off the standard MAGA fare, making false claims about voter fraud and railing about "the government, "big tech", "big pharma" and other groups were failing the United States, warning the crowd that these groups did not put America first. He also criticized critical race theory and the handling of the COVID-19 pandemic by the CDC."

And of course, there was the obligatory end to Gaetz's monologue: "Donald Trump won the election! This is Donald Trump's Republican party," he said to cheers and applause, the media report noted.

In its reporting of the event, Florida Today offered this interesting perspective as well:

"The Florida Man Freedom Tour follows his America First tour that Gaetz launched on May 7 with U.S. Representative Marjorie Taylor Greene (R-GA) in The Villages, a large retirement community that has been a popular speaking location for conservative figures.

"Since then, three locations in California cancelled the duo's events as recently as July 17, citing concerns of safety and a lack of prior knowledge that Gaetz and Greene would be the speakers.

A Hilton Melbourne Beach Oceanfront official said Saturday the hotel did not know Gaetz would be speaking as the event was registered under the Logan Circle Group.