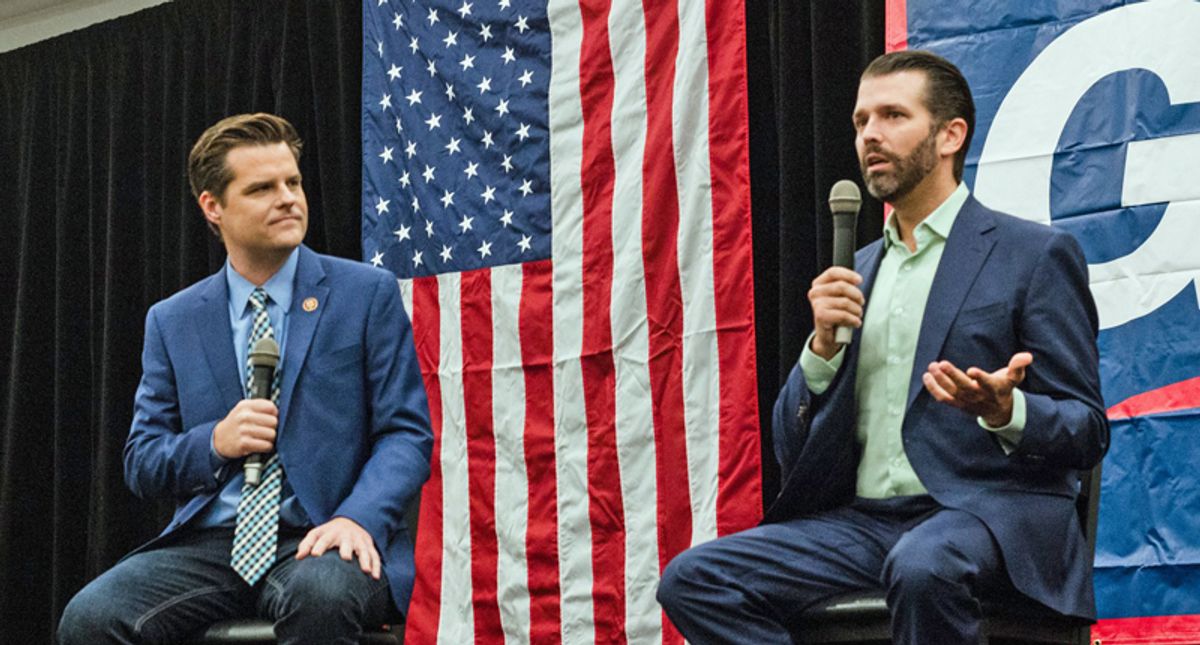 Americans were aghast after a New York Times report revealed that Rep. Matt Gaetz (R-FL) is under investigation for the possible sex trafficking of a minor.

According to the report, Gaetz was caught up in a larger investigation into a political ally of his. Former Seminole County tax collector Joel Greenberg was indicted last summer on charges of sex trafficking a child and "financially supporting people in exchange for sex." One of those was an underage girl, the report explained.

Ironically, it was less than a week ago that Gaetz joked he wanted to name his own scandal GaetzGate.

Some questioned how an anti-pedophile group like QAnon could have missed one of their own trafficking minors.

"Gaetz cast the lone 'no' vote on a widely bipartisan human trafficking bill that passed unanimously through the U.… https://t.co/k4eNaEZ3Tm
— shauna (@shauna)1617143105.0

See the comments about Gaetz in the tweets below:

WOW - Matt Gaetz is under investigation for having sexual relationship with 17 year old girl. In other words, statutory rape.
— A Hopeful Citizen (@A Hopeful Citizen)1617142650.0

Creepy Seditionist Matt Gaetz is being investigated by the DOJ over potential the sex trafficking of a 17 year old… https://t.co/FOuzg5bEGl
— Ricky Davila (@Ricky Davila)1617142650.0

We've been discussing this as it unfolds. Matt Gaetz is under investigation as part of the Greenberg inquiry. This… https://t.co/WmkXOogBJR
— Mueller, She Wrote (@Mueller, She Wrote)1617141988.0

In the article, Matt Gaetz notes that he is a "subject" and not a "target" of the investigation. That means he has… https://t.co/4FDjVLDnvJ
— Renato Mariotti (@Renato Mariotti)1617141852.0

In 2017, Mr. Gaetz was the only member of Congress to vote against a law that gave the federal government more powe… https://t.co/JReP6cukUp
— MeidasTouch.com (@MeidasTouch.com)1617141225.0

Matt Gaetz has finally found a way to make people stop talking about his history of drunk driving.
— JRehling (@JRehling)1617143053.0

“Matt Gaetz is accused of statutory rape” is a sentence I find myself completely unsurprised to type. It has alwa… https://t.co/c8zji5FVhY
— Rob Anderson (@Rob Anderson)1617143272.0

just thinking about the time matt gaetz was the only "no" vote on an anti human trafficking bill. no reason
— amy brown (@amy brown)1617143204.0