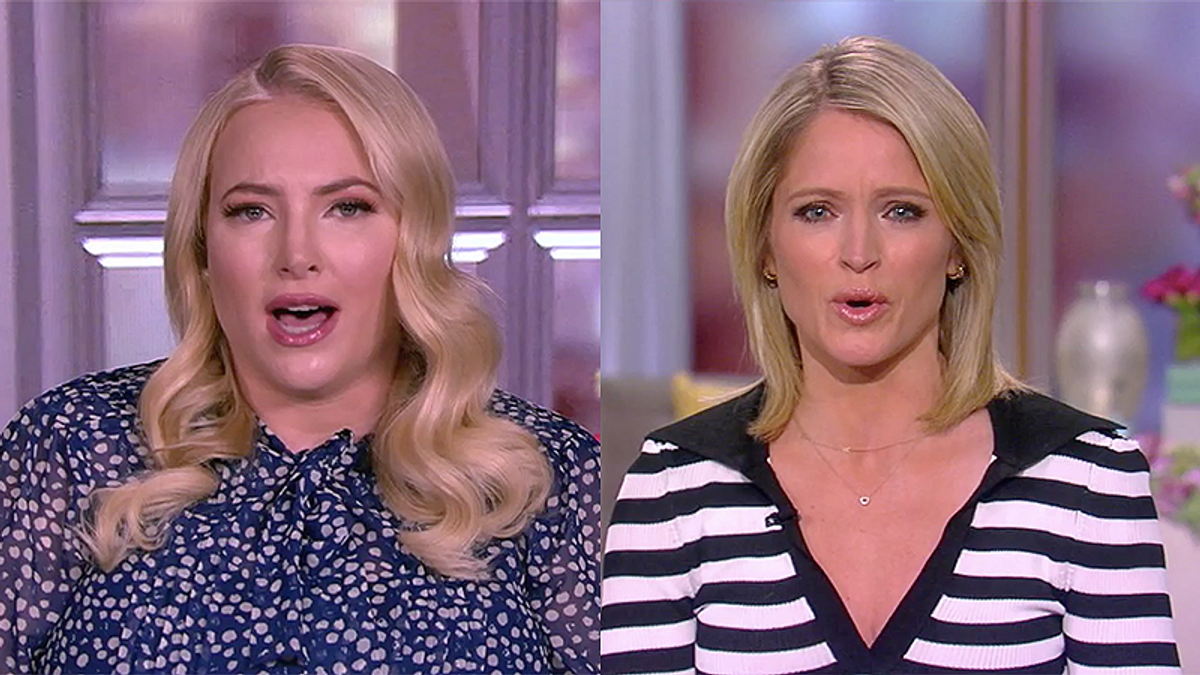 The conversation got heated Thursday when "The View" co-host Meghan McCain lectured Sara Haines for continuing to be bothered over the Jan. 6 attacks on the U.S. Capitol instead of what she deemed to be "real problems."

The conversation began as the panel talked about outright denialism from Republicans on the House Oversight Committee Wednesday. Rep. Andrew Clyde (R-GA) announced that he is an insurrection denier to viewers, saying that those who attacked police, and trashed the Capitol were just "visitors" being "orderly" in Statuary Hall that day.

Rep. Pat Fallon (R-TX) said during the hearing that the attackers were just a "mob of misfits." Rep. Paul Gosar (R-AZ) passed over the violence saying that "many…peacefully protested" on Jan. 6. Rep. Jody Hice (R-GA) claimed "it was Trump supporters who lost their lives that day," as if that somehow made the attack on the Capitol acceptable. Rep. Ralph Norman (R-SC) questioned how Attorney General Merrick Garland even knows that the mob was of Trump supporters.

"I feel like we're stuck in a Borat film," Haines said. "That was unbelievable to watch. And [Clyde] couldn't look up at the camera. He was looking at a script because I think he could barely believe and doesn't believe what it was saying."

She went on to say that Clyde made it sound like the people scaling the walls and breaking through the windows and doors were just peacefully protesting.

"I went to D.C. I don't know if that was the VIP package, but we weren't allowed to sit at Nancy Pelosi's desk and put our feet up and take pictures like you're visiting Santa Claus and storm the hallways," said Haines. "By the when they were walking through the hallways in 'an orderly fashion,' I think is what he said, they were saying 'Where do you think they are?' They were hunting down people. I mean, it's -- I don't know how anyone through that without completely shocked."

One of the main reasons that the Jan. 6 incident continues to be part of the discussion is that so many Republicans are now denying that it happened at all. Democrats have called for a Jan. 6 commission, modeled after the 9/11 commission to walk through the security failures, and other pieces of the attack and make recommendations on a path forward. Republicans are blocking the commission, in part, because they think there should be people on it that continue to deny it happened.

It prompted Meghan McCain to lash out about the media, who she said is "still talking" about Jan. 6 and avoiding critical reports on Joe Biden.

McCain said that she was unable to put gas in her car because the station in her neighborhood had lines down the street because "there's no gas whatsoever." She claimed the country is in a crisis "like it's the 1970s all over again." Due to the hacking of the Colonial Pipeline, many in the eastern United States freaked out and flocked to fill up their cars with anticipation that prices would skyrocket. That has resulted in a gas shortage.

"You know what's also a strategy, Sara, a strategy is not focusing on anything the Biden administration is doing right now that is leading this country into a crisis." McCain continued. "There's a crisis at our border, inflation rates are sky-high, the middle east is on fire, unemployment is crazy and a lot of Americans can't figure out how they're going to get gas in their car."

As a fact-check, the "crisis" on the border has been going on for years, from the Obama administration through Trump and into Biden. Until there's a massive fix that solves the crime, drug and climate change problems in Latin America it is likely to continue, explained Jorge Ramos in The New York Times last month.

As Raw Story explained Wednesday, the inflation problem isn't actually a problem. Inflation dropped so significantly during the pandemic last year that it appears to be stabilizing, according to economics reporters at the Washington Post. One hundred-year chart shows the so-called "inflation problem" in the proper context.

The people who have been wrong about inflation forever would like to use their pretend concerns about inflation to… https://t.co/JoPRzw6xBa
— LOL🇺🇸GOP (@LOL🇺🇸GOP) 1620863470.0

Co-host Sunny Hostin chimed in after McCain explaining why people are still talking about Jan. 6 — because it still hasn't been resolved.