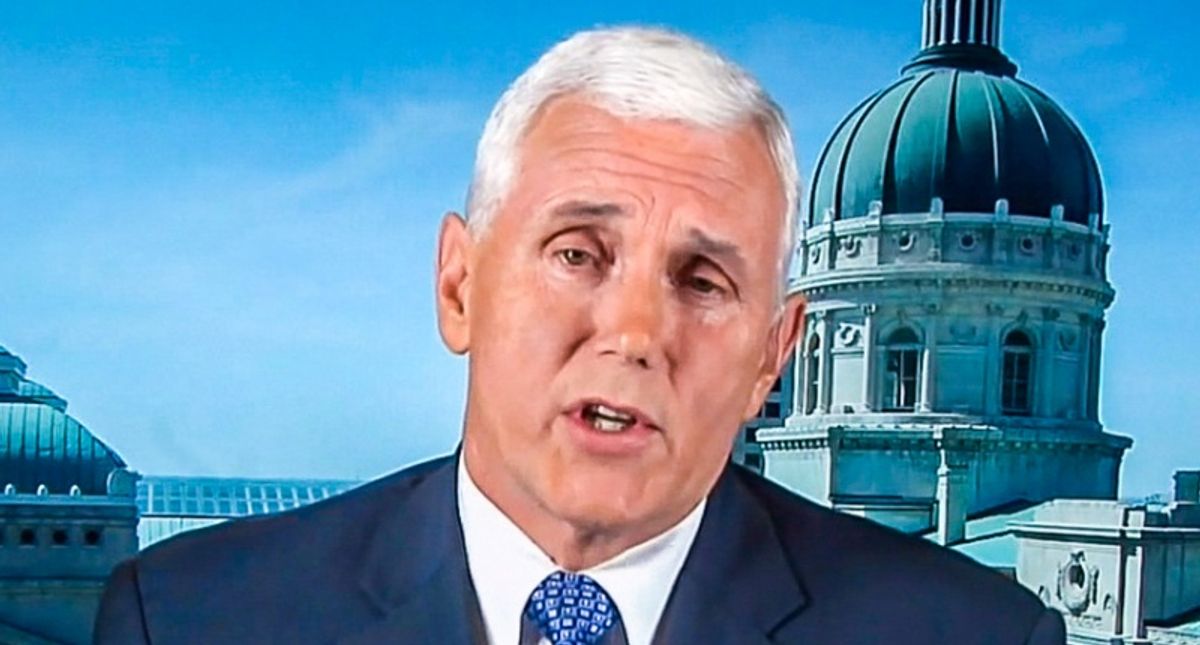 Mike Pence broke his silence on the Jan. 6 insurrection that put his life in danger, and he was blasted as a coward for justifying the rioters' concerns about election fraud.

The former vice president published an op-ed Wednesday on The Daily Signal website arguing against the For The People Act that would expand voting access, and instead defended Republican state legislatures imposing new restrictions to the ballot.

"HR 1 is an unconstitutional, reckless, and anti-democratic bill that would erode those foundational principles and could permanently damage our republic," Pence wrote.

"After a year in which our nation has endured a global pandemic, economic hardship, and a contentious election, now is not the time to further inflame passion and division," he added. "It is time for our nation's leaders to help America heal."

HR 1, the so-called For the People Act, will increase opportunities for election fraud, trample the First Amendment, further erode confidence in our elections and should be rejected by every member of Congress and opposed by every patriotic American.
— Mike Pence (@Mike_Pence) March 3, 2021

Social media users were astonished and appalled by Pence's position.

Mike comes out from hiding after Trump's supporters tried to kill him, to push the big lie.

People lack confidence in our elections because you just spent the past year allowing them to be lied to, right up until they tried to kill you over it.
— Kristen (@KristenKfromGA) March 3, 2021

These are the types of lies that almost got you lynched. Some people never learn, I guess.
— Rich Waters (@richawaters) March 3, 2021

Sorry but trying to disenfranchise voters by the new laws that @GOP are trying to rush in is wrong. Why should minority poor areas of the country have to queue for 13 hours to vote, that is disgusting!!
— Becky Hatfield (@Beckster_2) March 3, 2021

That is a lie. The Brennan Center who has been tracking elections for decades called HR1 an historic bill on line with the Civil Rights Act of 1964. They said it needs to be passed to protect "We The People" and our vote.
— BON (@Dist_5) March 3, 2021

Perhaps you guys would've been better doing a better job for the American people! Then you might have got re-elected on merit rather than having to resort to peddling election conspiracies in the aftermath.
— Stephen Smith (@stevesmith2001) March 3, 2021

This is a lie. The lawyer for the AZ GOP told SCOTUS yesterday their rules which disenfranchise Black, Brown and Native Americans are ok because politics is a zero sum game & help the GOP win. That erodes confidence in elections and increases opportunities for GOP election fraud.
— Tedmom 😷 (@Tedmom) March 3, 2021

@Mike_Pence - in your heart of hearts you know that Trump isn't christian. Our lies of omission are more damning than our lies of commission.

I will pray for you to find the courage the speak the truth.
— Jacob Killian (@jacobkillian) March 3, 2021

Democracy is ensuring EVERY citizen of the United States has EVERY opportunity to participate in our elections. Instead Republicans go out of their way to ensure specific populations cannot. Adjust your policy, not the polling stations, ballot boxes. Only an issue when you lose.
— Blake Crews (@SimmonsTheMad33) March 3, 2021

Oh my gosh. Eliminating dark money groups by requiring them to disclose their donors...is long needed.

Here's how Pence characterizes that portion of the bill: pic.twitter.com/euJlv5Psa5
— Will Ragland (@citizenwillis) March 3, 2021