Mitch McConnell sold his soul to Trump -- and now he's trying to bury him: report 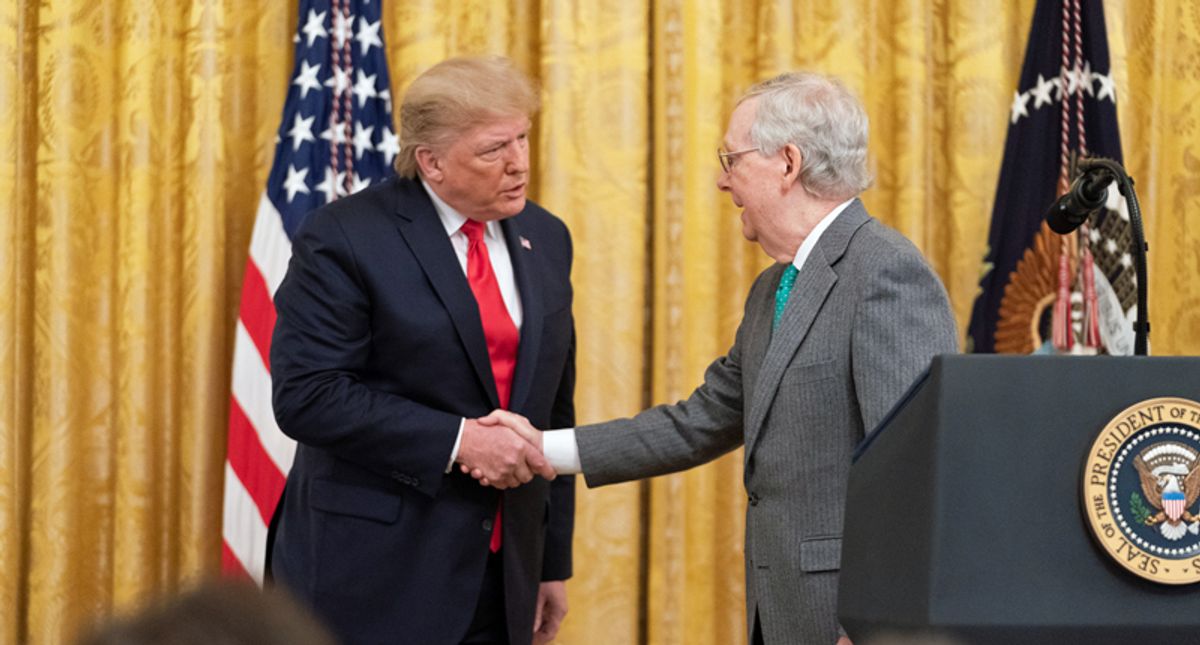 According to a report from the New York Times, Senate Minority Leader Mitch McConnell (R-KY) would like nothing better than for former President Donald Trump to leave the national stage, retire quietly and spend his days playing golf for the rest of his days at his Mar-a-Lago resort after getting what he wanted out of the ex-president for the past four years.

With Trump making plans to reassert himself within the Republican Party after surviving his second impeachment trial, McConnell is expected to wage a cold war with the former commander in chief as the GOP leader attempts to rebuild a damaged party that just lost the Senate and the White House.

As the Times report notes, McConnell never wanted Trump as the face of the party but -- after being stuck with him following his 2016 presidential win that even McConnell didn't think was possible -- he jumped in bed with him to push through his own agenda.

"Like most Americans, Mr. McConnell expected Mr. Trump to lose to Hillary Clinton in November 2016, and he also braced for the potential loss of the Senate majority as party pollsters and strategists predicted a big night for Democrats. Much to the surprise of Mr. McConnell, Republicans held on and Mr. Trump triumphed, an outcome for which Mr. McConnell could deservedly take some credit," the report states, adding, "Mr. McConnell, the canny Senate leader, and Mr. Trump, the Washington novice suddenly ensconced in the White House, became a team. It was not a great personal match. Mr. McConnell spilled nothing of his intentions; Mr. Trump spilled all."

That relationship allowed McConnell to pack the courts and push through a major tax cut for the rich, while the ex-president was allowed to preen that he was making America great again.

However, the relationship grew increasingly rocky and Trump's unpopularity spilled over onto down-ticket Republicans in both the 2018 midterms and the 2020 election that culminated in McConnell losing his power after Trump failed to help the GOP hold onto two key Senate seats in Georgia.

"Then came the election. Mr. Trump refused to accept the results, making wild and unsubstantiated claims of voter fraud. Mr. McConnell indulged him and refused to recognize President Biden as the winner until he could avoid it no longer after the states certified their electoral votes on Dec. 14. He congratulated Mr. Biden the next day," the Times report states. "The interests of Mr. McConnell and Mr. Trump now sharply diverged, with Mr. McConnell fixated on regaining power in 2022 while Mr. Trump was stuck on 2020, making outlandish allegations that threatened to drive off more suburban voters and imperiled two Georgia seats that went to Democrats on Jan. 5. Then the riot the next day found marauders in the Senate chamber, Mr. McConnell's sanctum sanctorum."

Although McConnell voted to acquit Trump a second time in his latest impeachment trial, he did rip into the ex-president in a speech that day, saying Trump needs to be held to account for the Jan. 6th Capitol insurrection.

"His [McConnell's] post-trial speech and a subsequent op-ed in The Wall Street Journal drew the ire of Mr. Tump, who fired back with a call for Republicans to dump their leader — an unlikely prospect — and a threat to mount primary challenges against candidates allied with Mr. McConnell, a more worrisome prospect for members of the party," the report continues. "Now the question is whether Mr. Trump will follow through, causing intramural fights that ultimately lead to Democratic victories. Mr. McConnell's allies note that he has been in this position before facing challenges from the right and came out on top."