'We ain't done': This Arkansas man connected to key pro-Trump organizers was present at assault of Officer Fanone

Nathan Hughes rode in the passenger seat of the golf cart driven by Scott Chafian, a retired Naval commander, as they raced towards the Capitol on Jan. 6. Hughes raised up and peered over the roof of the cart, as they followed another cart driven by Scott Chafian's wife, Cindy, whose passengers included the wife of right-wing media performer Alex Jones.

Hughes, a Trump supporter from Bentonville, Ark., had come to DC at the urging of Matt Couch, a conspiracy theory promoter known for pushing the false claim that Seth Rich, a Democratic National Committee staffer murdered in an apparent botched robbery, was responsible for leaking damaging information about DNC officials during the 2016 campaign.

After wending through the crowd on the Capitol lawn and working his way up the Capitol steps with Scott and Cindy Chafian and with Erika Wulff Jones, Hughes would eventually make his way into the Lower West Terrace Tunnel. He was part of the crowd of rioters who were ejected from the tunnel by DC Metropolitan police officers just before Officer Michael Fanone was dragged off the police line and subsumed in the crowd.

Hughes' presence at the site of the assault on Fanone was first reported on Twitter by the @capitolhunters account.

Prior to the assault on Fanone, Hughes can be seen in a video posted on the Just Another Channel site battling police inside the tunnel.

"Hey, we're almost through," an unidentified man yells in the video. "We need more!"

Others at the entrance directed a stream of rioters into the tunnel on the right, with an outflow on the left to allow a constant rotation of volunteers to fight the police and then take a break to flush the CS gas out of their eyes with bottled water. As one cohort of rioters streams from the tunnel, Hughes can be seen at the entrance, briefly turning [01:19:12] before dashing inside. Squeezed into the tightly packed crowd rocking front to back, Hughes can be seen pointing a finger towards the officers and saying, "Take his shield."


"You had a large group at the mouth of that tunnel entrance trying to push their way through the officers who were fighting to defend it," Fanone testified on July 27 before the House select committee investigating the Jan. 6 attack. "I believe had they done so or had they accomplished that, they would have trampled us to death. Most certainly you would have had police officers killed. I fought there at the front for some time. I was yelling out, you know, trying to inspire some of the officers that were tired, telling them to dig in and push. And we started to make some progress. We pushed those guys out of the tunnel."

As Fanone fell backwards, Hughes — identifiable by a dark, green cap, red bandanna and light gray hood bunched around his shoulders — bending over near the officer's feet and remained nearby for at least 13 seconds, video [55:33] shot by Noah Arnold shows. The video has been reviewed by Raw Story, but Arnold has since set the video to private. An archived copy of the video is available at the Internet Archive. Video shot by freelance journalist Blair Nelson from a different angle also shows Hughes hovering in the area of Fanone's feet as rioters swarm over him. A large Blue Lives Matter flag conceals the assault for about 30 seconds of Nelson's video.

"That initial period of time I was pulled off that line was kind of a blur," Fanone testified. "I just remember getting violently assaulted from every direction and eventually found myself out about 250, maybe 300 feet away from the mouth of the tunnel where the other officers were at. And I knew I was up shit creek without a paddle. I was trying to push guys off of me, create some space, all the while I recognized the fact that there were individuals that were trying to get ahold of my gun. I remember one of them distinctly lunging at me time and time again trying to grab my gun. And I heard people in the crowd yelling, 'Get his gun. Kill him with his own gun,' and words to that effect." 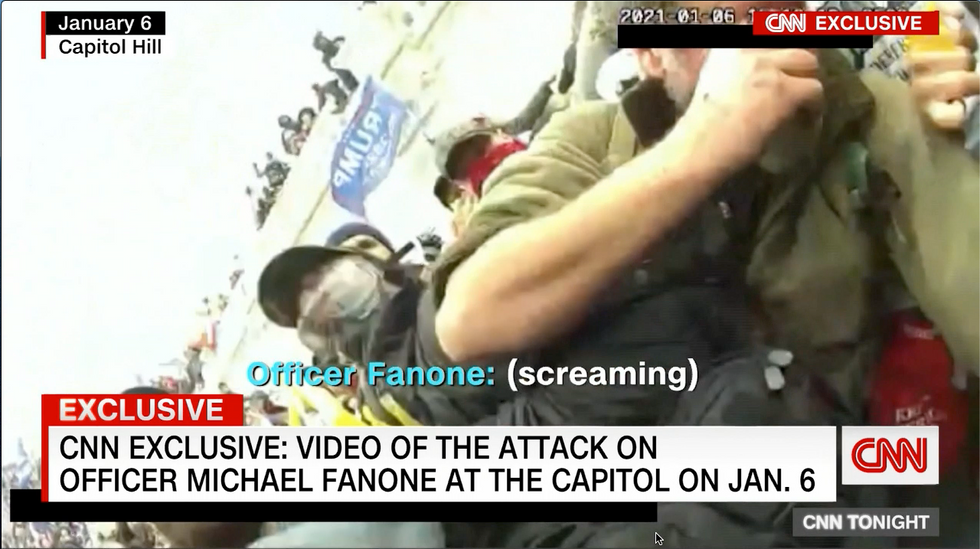 Fanone's body-worn-camera video shows Hughes' distinctive red bandanna visible behind two individuals who are directly in front of the officer. A grand jury indicted Daniel Rodriguez of Fontana, Calif. for assaulting Fanone by repeatedly Tasing him after he was dragged into the crowd. Thomas Sibick of Buffalo, NY is accused of robbing Fanone's badge and radio and faces a charge of assaulting an officer. It remains unclear how many people took part in the assault, and what, if any, role Hughes may have played.


Raw Story could not reach Nathan Hughes for comment on this story.

"I thought about using my weapon," Fanone testified. "I believe that there were individuals in the crowd whose intentions were to kill me. And I came to the conclusion that because of the fact that, separated from those other officers, who are only trying to defend the Capitol, I no longer posed any type of threat, nor was I an impediment to them going inside the building. But yet they tortured me. They beat me. I was struck with a Taser device at the base of my skull numerous times. And they continued to do so until I yelled out that I have kids."

Hughes' name in connection with his involvement in the Stop the Steal effort came to light through his friendship with Matt Couch, the conservative provocateur who promoted the Seth Rich conspiracy theory.

Using the Twitter account @RallyNate, Hughes posted a video of President Trump passing the Nov. 14 Million MAGA March at Freedom Plaza in his motorcade. Couch, in turn, incorporated the video into a story on his DCPatriot website, crediting "Nathan Hughes."

A resident of Rogers, Ark., Couch also mentioned Hughes in an Aug. 4 article in which he called Gov. Asa Hutchinson a "weakling" for expressing second thoughts on anti-masking legislation. In the article, Couch announced "rallies across the state," while pledging to "be there with my good friend Nathan Hughes leading the charge."

Earlier this month, Hughes testified before an Arkansas joint legislative committee to express his opposition to employee-mandated COVID vaccinations.

On Jan. 4, Couch tweeted that he was "on the ground here in DC," tagging Hughes through his @RallyNate account, along with eight others, including Brian Gibson and Greg Locke, two pastors who spoke at rallies promoting the falsehood that the election was stolen from Trump leading up to the assault on the Capitol.

On the evening of Jan. 5, Hughes tweeted in all caps: "WE ARE ON THE GROUND MR. PRESIDENT! WE WILL NOT LET THEM STEAL IT!"

Cindy Chafian, who drove the first vehicle in the golf cart caravan that ferried Hughes to the Capitol, was a key organizer in the efforts to mobilize crowds to express their opposition to the electoral vote certification. She obtained event permits for large rallies on Nov. 14 and Dec. 12 that built momentum for Jan. 6. On the eve of the attack on the Capitol, Chafian organized the "Rally to Revival" at Freedom Plaza whose featured speakers included Alex Jones and Roger Stone, working in tandem with Stop the Steal Organizer Ali Alexander.

Following the assault on Fanone, Hughes stuck around the entrance of the tunnel as rioters continued to batter the police.

As other rioters assisted Fanone to help him get back to the police line, Hughes can be seen in a YouTube video [1:25:17] published by the Black Conservative Preacher moving decisively back towards the tunnel entrance, reaching it in about 20 seconds. Then, the Just Another Channel video shows an argument ensuing over whether to escalate or negotiate for détente. "We gave 'em one!" one man shouts. "We're not a mob, we're patriots," another man says in a soothing voice. As a chant of "Police stand down" rises, Hughes can be seen leaning forward in earnest discussion with an officer in riot gear on the front line. (The audio of the published video is inaudible, but can be heard in a mp4 file downloaded and retained by Raw Story.) 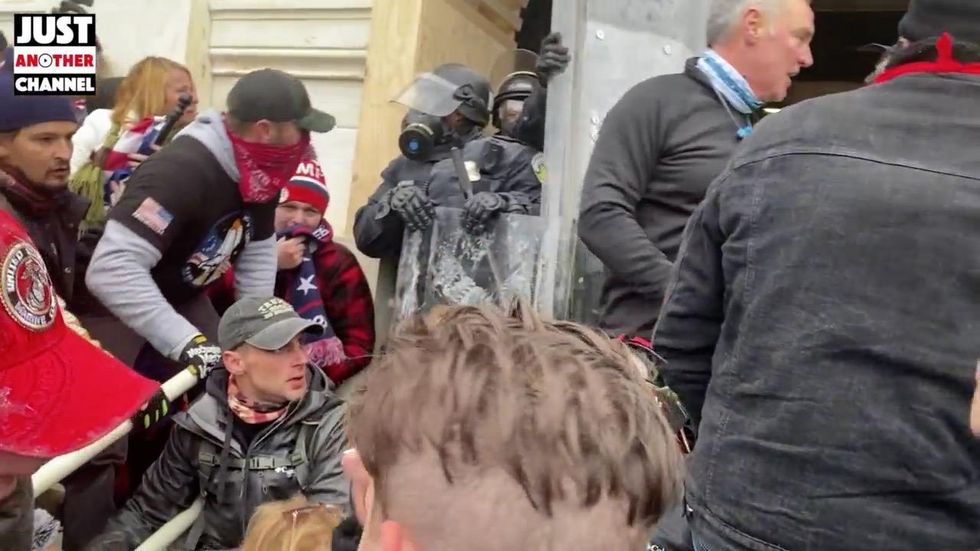 Nathan Hughes speaks with a police officer following that assault on Officer Michael Fanone.Screenshot from Just Another Channel video


Additional video published by The Black Conservative Preacher shows that Hughes remained near the tunnel entrance as violence resumed following the assault on Fanone. "Time for war!" a man can be heard shouting in the video. At that moment, a man — it's not clear if it's the same person — climbs up on a shield held aloft in the crowd and begins to wildly swing a baton at the officers in the mouth of the tunnel. Hughes, who is standing on the left side of the tunnel, jabs his finger in the air. The rioters thrust a giant flagpole into the tunnel and begin to chant, "Pull the cops out," interspersed with, "USA, USA." Hughes can be seen trying to work his way through the crowd to get closer to the action.

As another man swings from the wooden archway encasing the tunnel entrance and uses his feet to kick at the police line, Hughes can be seen motioning with his hand for the rioters to move in towards the tunnel. With the violence escalating, others can be seen hurling various projectiles, including a crowbar, at the tunnel entrance. At one point, Hughes appears to be trying to hoist himself above the crowd, but then drops back down to the ground.

At 4:17 p.m., as the battle at the tunnel continued to rage, President Trump tweeted a recorded video message, telling his followers: "I know your pain. I know your hurt. We had an election that was stolen from us. It was a landslide election and everyone knows it, especially the other side. But you have to go home now."

Despite having told more than 100,000 viewers on Periscope on Jan. 3 that "the time to fight is now," Hugh's friend Matt Couch was seeking to distance himself from the brutal violence against law enforcement by early evening on Jan. 6.

"Patriots are already back at their hotels," he tweeted at 5:44 p.m. "We don't square off with the Police and yell obscenities at people."

Hughes had another message that he shared with the world on Twitter at 11:29 p.m. EST.

Raw Exclusives SmartNews
Report typos and corrections to: corrections@rawstory.com.
Like this article ? Text `Support` to 50123 to donate.
READ COMMENTS - JOIN THE DISCUSSION