These Jan. 6 VIPs were near one of the most violent flashpoints of the Capitol riot — the assault on Officer Michael Fanone

Editor's Note: This story has been corrected to reflect that Millie Weaver was no longer employed by InfoWars at the time Cindy Chafian replied to her tweet.

The Washington DC Metropolitan police officers in riot gear heaved against the rioters, many of whom were equipped with Kevlar vests and helmets, gas masks and stolen riot shields, in a haze of CS gas inside the Lower West Terrace Tunnel. Blinking in the sunlight at the mouth of the tunnel after flushing the rioters out, the officers surveyed thousands of Trump supporters stretching to the Capitol Reflecting Pool.

Officer Michael Fanone's first thought was, "Man, it's good to get some fresh air," as he would later recall during his testimony before the January 6 commission. Almost immediately, he was pulled off the police line and dragged 250 to 300 feet into the crowd, getting assaulted from all sides, he testified. He recalled a rioter lunging at him to try to get his gun, and being repeatedly Tased at the base of his skull. By the time he made it back to the police line with the assistance of some of the rioters, he was unconscious.

Observing the chaotic scene from near the base of the northwest risers erected for Joe Biden's inauguration and jabbing her finger in the air as officers extracted Fanone from the mob was Cindy Chafian, an organizer whose behind-the-scenes work had helped bring thousands of Trump supporters to DC on Jan. 6. A veteran of the Tea Party movement and resident of the Tidewater region of Virginia, Chafian had helped Women for America First leader Amy Kremer organize a rally to support President Trump after his first impeachment in 2019. It fell to Chafian to secure the permits for pro-Trump rallies on Nov. 14 and Dec. 12, which had built momentum for the siege on the US Capitol. And Chafian had worked alongside conspiracy theory promoter Alex Jones to produce her own event at Freedom Plaza on Jan. 5, which featured Jones as a speaker alongside retired Lt. Gen. Michael Flynn and other luminaries.

Chafian's presence near the epicenter of the tunnel battle was first reported on Twitter by the @capitolhunters account.

Chafian and Jones were seated together in the VIP section during Donald Trump's speech at the Ellipse, video shot at the event shows. Later, Chafian drove a golfcart to the Capitol, with Erika Wulff Jones — Alex Jones' wife — riding on the back. Cindy Chafian's husband, Scott, a retired Naval officer, followed in a second cart.

Holding her cell phone up to film the scene, Erika Jones raised her fist and declared, "We're taking it back," as seen in video posted on YouTube by the account MrYogiEntertainment. As Cindy Chafian navigated the cart through the crowd, an unidentified man riding beside her announced through a megaphone: "We're going to the Capitol. We're going to take our republic back." 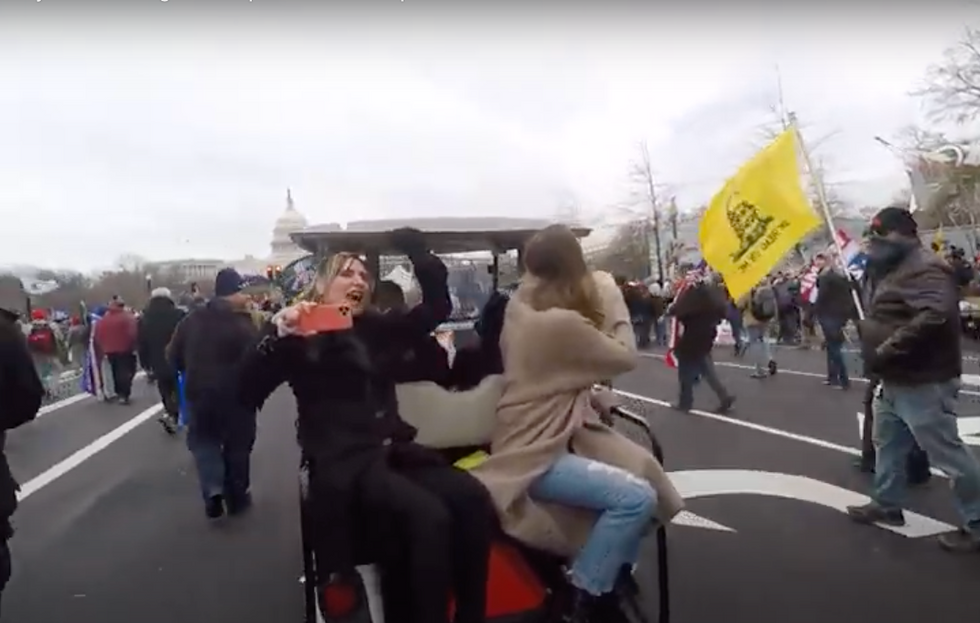 The scene was also filmed by Anthony Puma, a Michigan man who would later be charged with obstruction of an official proceeding and other offenses related to breaching the Capitol. FBI agents seized a card containing footage Puma captured in Washington DC on his GoPro camera. A screen capture from the video shows an unidentified man standing on the back of the cart driven by Scott Chafian. Puma's charging document reports that the man can be heard saying, "We are inside, they need help, we've breached the Capitol." 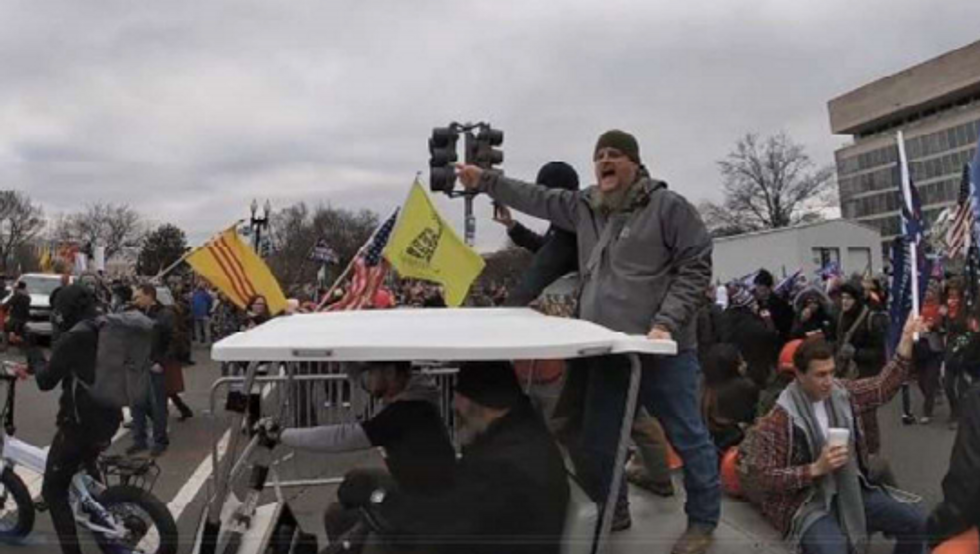 Scott Chafian drives a golf cart to the Capitol. (Screenshot of video by Anthony Puma via US Justice Department)

The Chafians and their entourage moved deliberately through the crowd, suggesting a determination to reach the Capitol that presents a striking contrast with other Trump supporters, who appeared to be going with the flow. In one portion of the video, Cindy Chafian's cart can be seen speeding through a parking lot until temporarily halted by another Trump supporter stepping in the cart's path.

Photography and video from multiple sources that has been reviewed by Raw Story track the Chafian entourage's progress towards the front of the Capitol. An image captured by Quinn Glabicki, a Pittsburgh-based freelance photographer, appears to show Cindy Chafian, holding a blue and white megaphone and wearing a blue overcoat; Scott Chafian, with a full beard speckled with gray and wearing a blue toboggan; and Erika Jones, with blond hair pulled back in a top-knot; at the bottom of the stairs leading from the plaza to the scaffolding. Glabicki confirmed the authenticity of the photograph in an email to Raw Story.

Erika Jones' husband traveled separately to the Capitol. A video posted on Parler and republished by ProPublica shows Alex Jones giving a speech in front of an office building at 1:10 p.m., alongside Stop the Steal organizer Ali Alexander and fellow InfoWars host Owen Shroyer. At 1:54 p.m., another Parler video shows, Jones addressed the crowd from the Capitol lawn on the west side, still accompanied by Shroyer and Alexander. Shroyer was charged with illegally going into a restricted area and disorderly conduct on Aug. 20. The government specifically cited the location where Jones spoke as a restricted area in a charging document.

"We're not antifa; we're not BLM," Jones told the crowd. "You're amazing. I love you. Let's march around to the other side. And let's not fight the police and give the system what they want. We are peaceful. We won this election. And as much as I love seeing the Trump flags flying over this, we need to not have a confrontation with the police. They're going to make that the story. I'm going to march to the other side where we have a stage, we can speak and occupy peacefully…. I salute you. Tell everyone you know: Go to the other side of the Capitol. That's where Trump's gonna be." (Despite Jones telling the crowd at the Ellipse that "I'll be there with you," Trump was not, in fact, waiting for them on the east side of the Capitol.)

A video originally published on Parler and preserved at the Internet Archive appears to show Cindy Chafian standing on the risers and jabbing her finger as Metropolitan Police officers in green reflective vests emerge from the tunnel to rescue Officer Fanone. Identical visual details from two separate videos shot from different angles appear to confirm that Chafian was present near the assault. One YouTube video entitled "Police officer engulfed in crowd" by The Conservative Black Preacher shows a young man with curly, brown hair standing in a window to the right of the tunnel entrance and a man in the crowd wearing a tan backpack, which can also be seen in first previous video. Likewise, a video posted on the Just Another Channel channel entitled "What REALLY Happened in DC" shows a blue "Trump Train" flag (at 87:17 mark) in the same position relative to the tunnel as is depicted in the video of Chafian.

Another photo licensed by Reuters appears to show Chafian watching from the risers when rioters wielded a giant ladder at the officers in the mouth of the tunnel. Reuters confirmed the authenticity of the photo in an email to Raw Story. 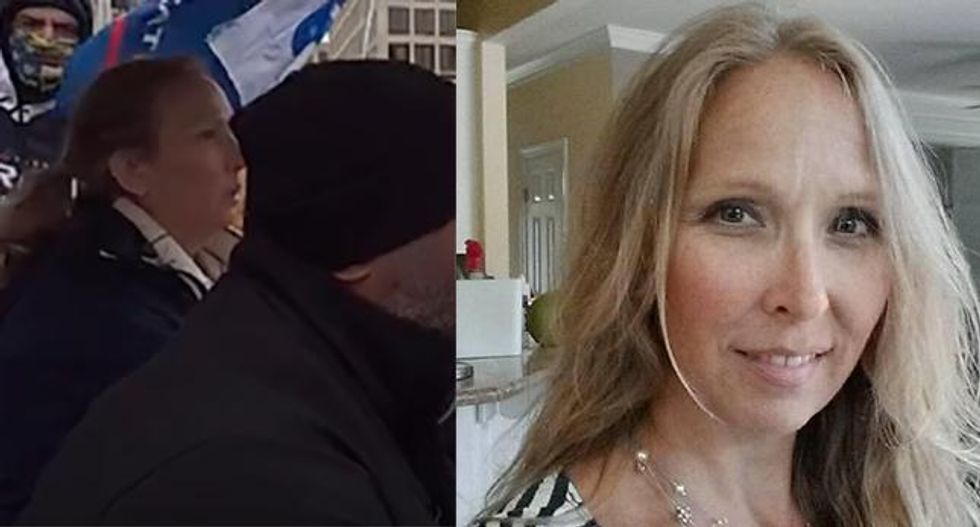 Reached by Raw Story by phone, Chafian declined to comment, except to say that video of her at the scene "was very deceptively edited." She added, "I was very much not close to the tunnel, so that's all I'm going to say about that."

"I mean, it was pretty obvious what the experience was," she said. "We were there peacefully, and it was very manipulatively, deceptively fed to the public as being something that it wasn't, and I really don't have anything else to say about it."

Facebook video posted by a man named Randy Morrison appears to show Scott Chafian near the bottom of the risers after the assault on Fanone. The presence of a professional photographer on a ledge to the right of the tunnel entrance that is visible in the footage of Chafian can be synced with another video published by the Black Conservative Preacher that shows rioter Anthony Alexander Antonio giving a speech about a supposed agreement negotiated with the police.

It's not clear when Cindy Chafian left the Capitol, but a reply to a tweet from former InfoWars correspondent Millie Weaver reporting that the Senate would reconvene to restart the electoral count, Chafian tweeted, "Guess it [sic] time to go back out."

Erika Wulff Jones at least came close to reaching the Lower West Terrace Plaza. Video uploaded to Parler and republished by ProPublica (3:17 p.m.) appears to show Jones standing on a ledge with her arm grasping the top of a wall, as another woman can be heard saying, "We just climbed up in all this craziness…. Well, talk about being part of a revolution, huh?"

Scott Chafian also could not be reached for this story. Compared to his wife's highly visible profile as a conservative activist, Scott Chafian has maintained a lower profile. He retired as a lieutenant commander in the Navy in 2012, finishing his military career with the Expeditionary Combat Readiness Center at Norfolk, Va., according to his page on Togetherweserved.com. His LinkedIn page describes him as a "surface warfare, expeditionary, and anti-terrorism officer."

Chafian served in Navy Provisional Detainee Battalion 1 in Iraq in 2005 and 2006, before returning to the United States to help the Navy establish the Expeditionary Training Command at Little Creek, Va.