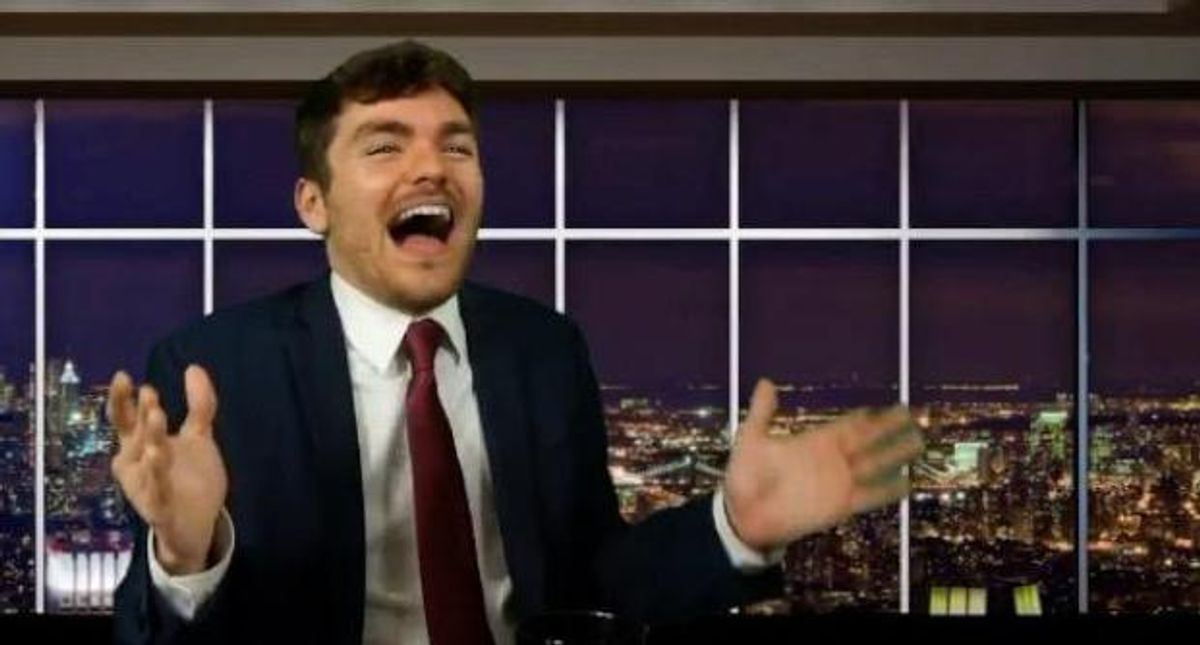 Nick Fuentes, the 22-year-old white nationalist leader, says the government seized a significant amount of money from him, while complaining that he was placed on a no-fly list that prevented him from flying from Chicago to Florida to attend a press conference yesterday.

Fuentes, who hosts the nightly "America First" show, is an avid supporter of Donald Trump who attended the 2017 Unite the Right rally in Charlottesville. Following the public backlash against the violence at that event, Fuentes gravitated towards the optics-conscious wing of the fractured alt-right coalition, assembling a following known as the "Groypers" that have focused on radicalizing college Republicans to the white nationalist cause.

Following the 2020 presidential election, Fuentes' group joined the Proud Boys in large rallies in Washington DC on Nov. 14 and Dec. 12 that set the stage for the Jan. 6 assault on the US Capitol. Fuentes spoke outside the Capitol as rioting began on Jan. 6, but has said he did not go inside.

At least one prominent Groyper is charged in the assault on the Capitol. Christian Secor, a former UCLA student and founder of America First Bruins, has been indicted for obstructing an official proceeding, assaulting, resisting and impeding officers, and civil disorder, among other charges. An affidavit submitted by the FBI to support the charges against Secor includes a photo of him shaking hands with Fuentes, who is described in the document as the founder of the "America First podcast" and as "a public figure known for making racist statements and denying the holocaust."

Fuentes mentioned the government seizure of his funds on his "America First" show last night.

"I don't like to brag or anything, but if you knew how much money they took — do you know how much I fucking hate the government because I woke up and one of my checking accounts — one of my checking accounts, which has lots and lots and lots of money in it, had zero dollars," Fuentes told his followers. "So, when people accuse me of being a fed, it's like, 'You have no idea what I have been put through.'"

It's not clear exactly how much money was withdrawn from Fuentes' account, but he said it was in the six-figures range.

Fuentes reportedly received a $250,000 contribution from a mysterious French donor through Bitcoin in December. The donation was disclosed through an investigation by Chainalysis, a group that tracks Bitcoin transfers. The investigation found that the donor, a French computer programmer, transferred a total of $522,000 to various US far-right figures. The largest amount, by far, went to Fuentes.

In a suicide note published as a blog post, the donor expresses support for far-right views, including the false belief that George Floyd died from a drug overdose and the idea that COVID-19 is a hoax perpetrated by world governments as justification to restrict civil liberties.

"That's why I decided to leave my modest wealth to certain causes and people," he wrote.

Megan Squire, a computer scientist who tracks white supremacists' financial transactions for the Southern Poverty Law Center, told Raw Story that this is not the first time Fuentes has publicly disclosed that one of his bank accounts was seized by the government. And Fuentes publicly feuded with others in the white supremacist movement since Jan. 6 about the likelihood that he's under investigation and whether he's putting his followers in legal jeopardy by continuing to hold live events. But Squire said Fuentes is becoming increasingly open about the FBI investigation.

"Last night was the first time he said 'FBI' and 'six figures," she said. "Okay, we're getting some specifics here."

The FBI did not respond to a request for comment for this story.

Fuentes' comments about the government seizing funds from one of his bank accounts were made in the context of his complaint that he has been prevented from flying. On Tuesday morning, he posted a video on Twitter with a recording of a person who appears to be a Southwest Airlines agent telling him "they're not letting you fly." The Twitter post includes the text: "Video proof that I am on a no-fly list."

Tucker Carlson, who has repeatedly promoted white supremacist positions on his Fox News show, appears to have taken up Fuentes' cause during his show on Tuesday evening, although he did not mention Fuentes by name.

"There are reports tonight that a number of American citizens, including Americans who were at the Trump rally in January — the perfectly legal Trump rally in Washington in January — have been placed by this administration on the no-fly list, meaning they cannot fly domestically," Carlson said. "We have not been able to confirm that, but if it's true, this is a turning point in American history. These are people, again, who have not been charged with crimes. If they have been prevented from traveling within their own country by the administration because the administration doesn't like their political views, that is not democracy; it is dictatorship."

On his show last night, Fuentes unspooled a grandiose and deluded rant, extrapolating that his placement on a government no-fly list was a precursor to white genocide.

"Maybe by 2100 we'll be able to say that white people are under attack or something," he said. "And by that point we'll be in the history books. At that point, it'll be Chinese overlords and a new Hispanic/African protectorate of the People's Republic of China teaching them about the Europeans in history class. We'll be extinct."

The myth of white genocide, also known as the "Great Replacement," has been used by terrorists, including Dylann Roof, Anders Breivik, Brenton Tarrant and Patrick Crusius to justify mass shootings that they carried out.

"He doesn't shy away from the idea that he's inspired people," Squire said. "He deems himself the leader of a movement and gave them a name. Now they wear funny hats and uniforms. To think that he doesn't want someone listening to him to take action — I don't think you can listen to him, and expect that people will just nod their heads and go on. That's not what he wants. That's not the point of the show."

Squire noted that in the past Fuentes has encouraged followers to kill state lawmakers and told them to be ready "to fight… with weapons" against a possible vaccine mandate.

"It's a directive," she said. "I don't think I need to give him the benefit of the doubt. His words don't leave a lot of gray area."