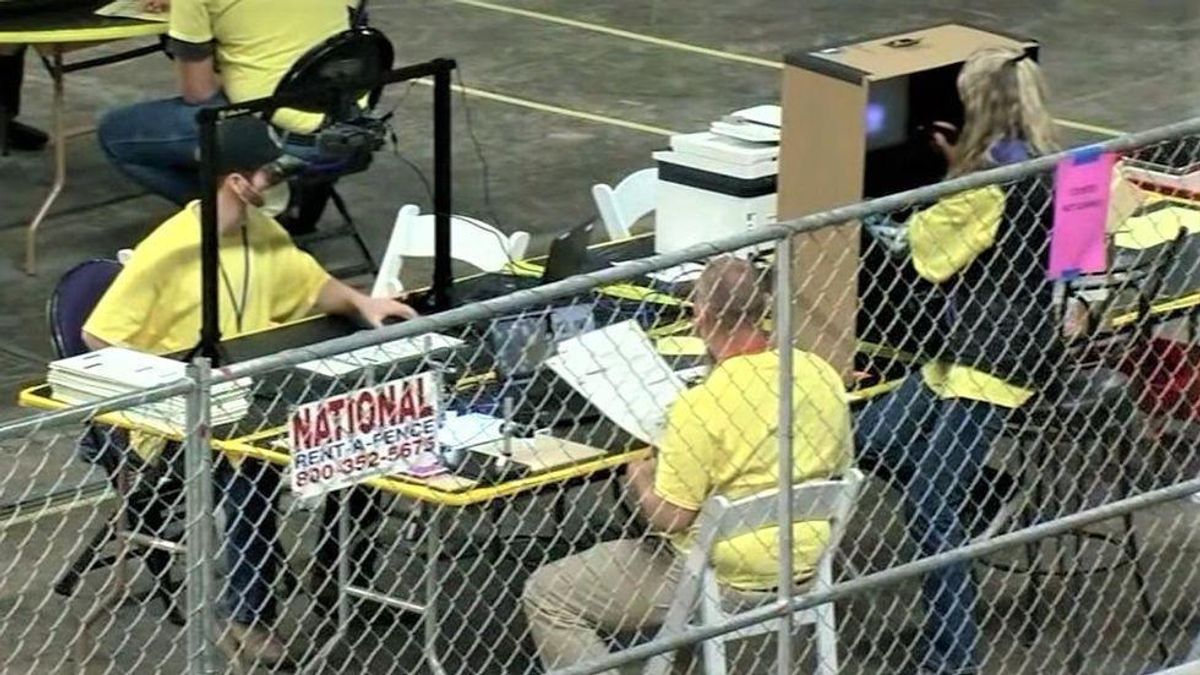 The embarrassing fake "audit" from Republicans in Arizona first began in Pennsylvania, according to Washington Post reporter Rosalind S. Helderman.

In a report Sunday, she explained that the recent interest by Republican gubernatorial candidate Doug Mastriano to hold a similar fake audit in Pennsylvania isn't the first time that it has been proposed. According to emails obtained by The Post, lawmakers in the state asked counties if they would submit to a review of their ballots.

"The previously unreported lobbying foreshadowed a playbook now in use in Arizona and increasingly being sought in other communities across the county as Trump supporters clamor for reviews of the ballots cast last fall, citing false claims that the vote was corrupted by fraud," said the report. "The former president's backers argue that any evidence of problems they can uncover will prove the election system is vulnerable — and could have been manipulated to help Biden win."

Fake audits like the one in Arizona are now being pushed in many states, though the Republicans don't have the public approval on their side. After watching Arizona Republicans make up stories about cheese dust, fake Asia ballots with bamboo, Americans went from being wary to thinking of the AZGOP as a joke, said a report last month.

"It is always the case that when there are serious controversies within a political party, it doesn't do the party any good," former U.S. Sen. Jon Kyl (R-AZ) told the Arizona Republic. "And I think the divisions within the Republican Party will not reflect well on the party's chances of success in the next election. That's pretty obvious."

Helderman explained that fundraising campaigns with unknown donors are funding so-called election experts claiming they have the power to recognize "voter fraud."

"In Pennsylvania, the state senators quietly targeted at least three small counties, all of which Trump had won handily. Their proposal was unorthodox: to have a private company scrutinize the county's ballots, for free — a move outside the official processes used for election challenges," said the report. "Only one county is known to have agreed to the senators' request: rural Fulton County, on the Maryland border, where Trump performed better than anywhere else in the state, winning nearly 86 percent of the roughly 8,000 votes cast."

Fulton County teacher Dayton Tweedy and his wife Kimbra spent months trying to learn more about the audit in their community and why it was done.

"I think they thought this was just a small, friendly area. If they could get away with it, they could raise questions about the legitimacy of the election," he said.

Very quietly during New Year's Eve, a company called Wake TSI, contracted by Trump lawyer Sydney Powell, counted about 1,000 mail-in-ballots. They agreed that the election was "well run" and "conducted in a diligent and effective manner," The Post said, citing the documents.

"However, before the final version was posted to the county website, it was revised. The new version included a caveat to the county's otherwise clean bill of health: 'This does not indicate that there were no issues with the election, just that they were not the fault of the County Election Commission or County Election Director,' it read, before flagging potential problems with the county voting machines and other aspects of the election," the report explained.

Trump supporters are now claiming that because voting machines are able to be hacked that the election was likely stolen in that county. The problem, however, is that Trump won that county. It's part of the "relentlessness" of Trump's allies to steal the election for him, the report said.

Fulton County was among several that got requests from Mastriano pal Sen. Judy Ward. She personally called Cumberland County Republican commissioners to ask if they'd participate in a "voluntary" audit. The commissioner said he didn't think it was necessary, but he'd discuss it with the others.

"It was like this rogue thing," said the single Democratic commissioner, Jean Foschi. "Those election machines are state and federally certified. Why would we let a private company come in and mess around with them?"

The Republican chairman of the commission, Gary Eichelberger, said that any request would have to be "brought to the board openly and not back-doored," as Ward had attempted.

"Maybe the Trump faction was trying to prove a point or prove what they felt was maybe some voter fraud," DiFilippo said. "I can't speak for other counties, but it sure as hell didn't happen in Cumberland County."

Still, somehow, Trump allies think that their way to overthrow the 2020 election and "reinstate" Trump is by conducting partisan audits by companies with ties to Trump. It hasn't gone well in Arizona, but leaders like Mastriano think it'll work.