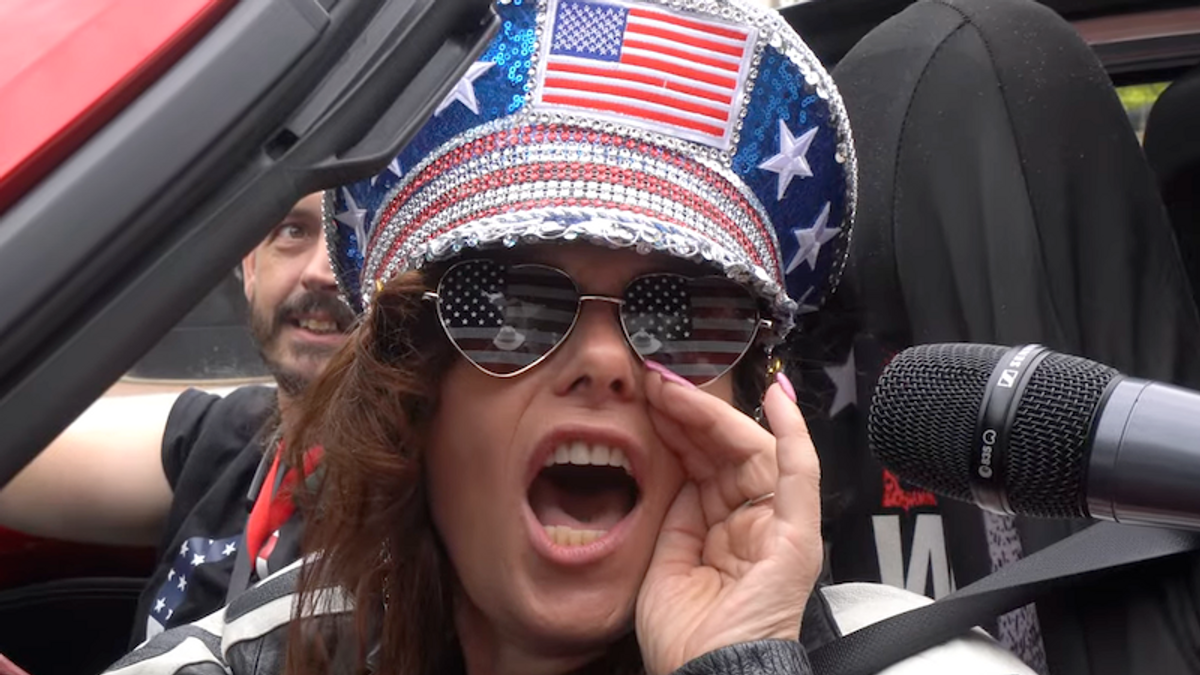 But Callaghan's 20-minute video, published Wednesday on his "Channel 5," is devoted mostly to interviews with lay followers of the conspiracy theory.

One woman told Callaghan the belief that prominent Democrats including President Joe Biden are "Satan worshippers, 100 percent" has led to her being ostracized by her family — which causes her to cry all the time — but she is undeterred.

Other attendees complained about how they've been banned from social media platforms due to their conspiratorial posts.

"People don't understand, everything that we've learned, from day one, has been a lie. We were never on the moon. I don't think the Hitler situation was as bad as it was, either," one man told Callaghan. "We're in a war. It's no different than what they were doing to the Jews and different things. They silenced them. They're just doing it through social media and electronically now."

Callaghan also consulted with a QAnon critic and expert, Brace Belden, who tried to explain the basic tenets of the group — including that Donald Trump is either "Q" or somehow behind "Q."

"He's a Christ-like figure who's come to the office of the presidency in order to arrest and execute every single person they don't like," Belden explained.

He added that QAnon followers were disappointed because they had been expecting a "storm" — when Trump would carry out the arrests and executions — but it never came. Meanwhile, the "Q" account stopped posting on the forum 8Chan in December.

"Q is true forever whether there are posts or not, as long as anons never cease to find and spread the truth," one woman told Callaghan, adding that she believes the Capitol insurrection was "an inside job."

"It was an infiltration," another man said. "I was there. I know what it was. Antifa, Black Lives matter, George Soros-funded, same thing. It's all an infiltration. We've learned it. We've seen the court documents since it happened."

Another man said he hopes the storm is still coming thanks to election audits in places like Arizona, while still others said Q and/or Trump have done their jobs by starting a great awakening and now it's time for followers to "take back" the country.

As for Flynn, he denied any knowledge of QAnon when confronted by Callaghan, even though he has appeared on video with his family taking the group's oath, "Where we go one, we go all."

Flynn told Callaghan QAnon is a "boogeyman" and a "new shiny object" created by the media.

"I don't know what QAnon is. I really don't, but I'm going to leave here saying, 'Well, do you believe in God?'" Flynn told Callaghan, prompting the host to point out he was being "very sneaky."

Other QAnon followers suggested that Flynn was just trying to avoid being ostracized. "He was the military man who knew about the Hillary Clinton scandals. His truth is what brought the movement alive," one person said.

Papadopoulos and West also denied any knowledge of QAnon in interviews with Callaghan.

"I don't know about it, and I only talk about things I know," Papadopoulos said, before oddly bringing up arena football.

Callaghan also interviewed Will Sommer, a reporter from the Daily Beast who covered the conference.

"I typically feel very bad for the average QAnon believer," Sommer said. "It preys on your emotions. Almost everyone I know, they have a story about someone they know who has lost their mind to QAnon."

The video concludes with ominous music and footage of conference attendees using vaping devices outside the venue. "I love Trump, but I hated when he banned flavored vape juice," one QAnon follower said.

Finally, there is footage of Flynn on stage at the conference telling attendees that a coup like the recent one in Myanmar "should happen here."