Fox host Rachel Campos-Duffy was called out Sunday after she claimed that Ukraine President Volodymyr Zelensky likely wishes that former President Donald Trump was in charge.

Trump, who dodged the Vietnam draft claiming "bone spurs," withheld aid from Ukraine in 2019, telling Zelensky he would send the weapons package passed by Congress only if he did a "favor."

Campos-Duffy was ridiculed online by those who rolled their eyes at her, but particularly by those who pointed out her ignorance.

According to Campos-Duffy, former President Barack Obama did nothing but send "blankets" to Ukraine. She said that thanks to Trump, Ukraine (eventually) got their aid and he "used that leverage to try to get Zelinsky to expose the proven Biden family corruption in Ukraine." As a fact-check: no corruption was able to be proven as even the Fox Network indicated when it refused to run Rudy Giuliani's false documentary on the matter. Guiliani was also caught on tape trying to pressure Ukraine into going after Biden. Giuliani was then banned from the network after the 2020 election.

While president, Obama sent over $1.3 billion in aid to Ukraine. That included "$20 million to support comprehensive reform in the Ukrainian law enforcement and justice sectors, including prosecutorial and anti-corruption reforms," as the Kyiv Post reported at the time.

There was also an additional $3 million that went to fund the UN World Food Program emergency operation in Ukraine. That came after the U.S. did a $1 billion sovereign loan guarantee issued in May 2014, according to the embassy. As the Wall Street Journal reported, the U.S. government committed nearly $320 million in assistance to Ukraine that year. There was a concern at the time that if the world sent money directly to Ukraine it would be squandered by corrupt leaders and oligarchs.

The aid from Trump's Pentagon was $250 million in "security cooperation funds for additional training, equipment and advisory efforts to build the capacity of Ukraine's armed forces," they announced.

Even without the $1 billion in loan guarantees, Obama sent $100 million more to Ukraine than Trump sent — but only once Trump finally handed it over.

See Campos-Duffy's as part of the thread reply below: 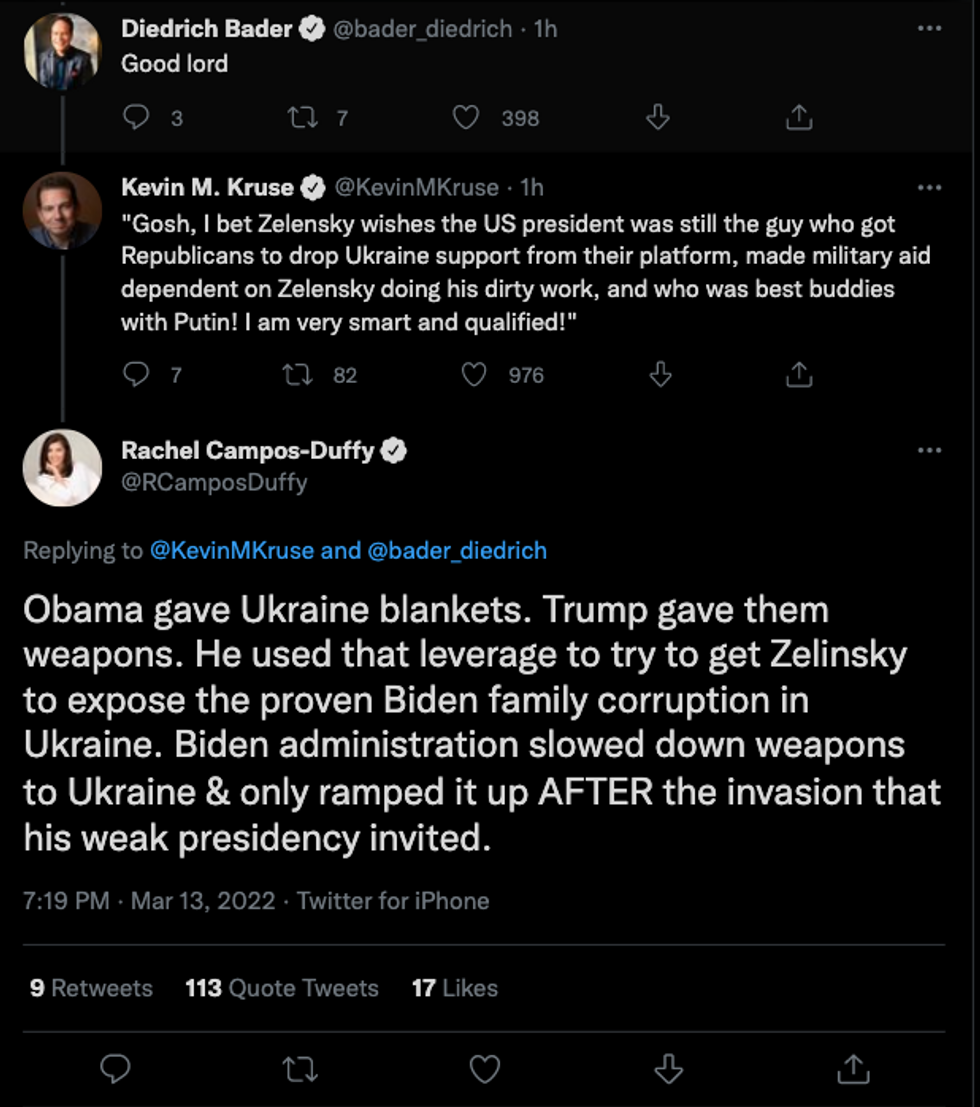 NOW WATCH: Oil plunges below $100 a barrel and loses 'quarter of its value' after 14-year high

Oil plunges below $100 a barrel and loses 'quarter of its value' after 14-year high www.youtube.com