SOUTHERN PINES, N.C. — The lights began to flicker back on across Moore County on Wednesday, four days after gunfire attacks on two substations caused a countywide power outage.

In Southern Pines, part of a cluster of towns surrounding the county’s prized golf courses, some customers saw their power restored by 10 a.m. By around noon the Southern Pines Public Library, which had been providing residents with warmth, respite and a place to recharge cell phones, was back online.

“When we opened Monday morning, we had a lot of really cold people come into our library to warm up,” Library Director Amanda Brown said. “There were a lot of cold, tired and frustrated people.

“People are pretty angry about the situation that brought us to this point,” she added, “but people are working together to help each other out.”

Jeff Brooks, a spokesperson, for Duke Energy said the utility expected to have power restored across the county by Wednesday evening. As of 4 p.m., Brooks said only about 1,200 customers at the southern end of the county remained without power.

By Wednesday morning, Duke Energy workers had installed new equipment at the two substations, calibrated and tested it. Brooks described how the utility was synchronizing the equipment with the electrical grid, with “waves of customers coming on, a few thousand at a time, so that we can safely restore power to the grid as we work to get everyone back on.”

Patricia Moore, a 61-year-old resident of Aberdeen, dropped by First Baptist Church Pinehurst around noon on Wednesday to recharge her oxygen machine and breathing machine, which opens her lungs. Moore said she has also been going to Harris-Teeter grocery stores, some of the few stores that remained open, to recharge her machines.

“It was wrong for the elderly and children, for human beings,” Moore said. “The people that did this, they should have thought of other people.”

NC Baptist Disaster Relief set up a mobile relief center to provide hot meals and showers in the parking lot of First Baptist, less than a mile from Duke Energy’s West End substation, one of the two substations that were damaged in the attacks.

Tom Beam, who directs the agency, said NC Baptist Relief has prepared 6,400 meals for the Red Cross to distribute, and provided residents with 85 showers at three locations across the county, along with 40 loads of laundry.

Sheriff Ronnie Fields pleaded with the public for patience during the press conference on Wednesday.

“Every investigator working on this case — state, local and federal — knows what you want, and that’s answers,” he said. “We want to know who and why, and we’re committed to giving you these answers. Before we go into talking about possible suspects and leads publicly before the person is even charged or arrested, we would jeopardize being able to hold them accountable.”

The county, Gov. Roy Cooper and Duke Energy, have pooled funds to offer a $75,000 reward for information leading to the arrest and prosecution of the person responsible for the attack.

Sheriff Fields said investigators are canvassing the area around the substations.

“We’re reaching out to all the folks in this area,” he said. “Anybody that may have a camera, door camera, surveillance cameras, in and around these areas that were hit, we ask you to please call us.”

Sen. Tom McInnis, who represents Moore County in the NC General Assembly, predicted that with the reward money on the table, “we’re just days and moments and hours away from catching the culprit that did this tragedy.”

Cheryl Christy-Bowman, a local blogger, said this disaster is different from a snowstorm or a hurricane, when people have time to prepare and stock up on provisions. Cold and lack of water have been the most acute effects of the outage.

Christy-Bowman said she’s heard from parents whose children could not handle the cold, and had to spend $500-$600 on hotels.

“The amount of food that has been spoiled, destroyed, people don’t know how they’re going to replace that food,” she said. “If they’re lucky enough to have an insurance company that covers food spoilage, it’s still going to take weeks for them to get reimbursed. What are they going to do in the meantime? People who are on food stamps, they will get additional food stamps, but what are they supposed to do in the meantime?”

Regardless of political ideology, Christy-Bowman said, residents in the conservative-leaning county are angry about the outage, based on the understanding that it was a targeted attack. If anything, she said, people are angry about officials minimizing the attack by calling it “vandalism.”

“And vandalism is spray-painting a bridge; it’s putting graffiti on a wall,” she said. “It’s not knocking 40,000 people out of power.

“It’s an insult to the community and the hardships that people are going through to continue to refer to it as vandalism.”

Meanwhile, elected officials have sought to turn the sudden national attention to the county’s benefit. McInnis used the press conference on Wednesday as an opportunity to “welcome everybody to the home of American golf,” touting the “world-class golf courses” around Pinehurst.

Southern Pines, a town adjacent to Pinehurst with a Downtown Historic District built around a picturesque rail station, showcases the cultural cross-currents at play in the county. The marquee of the Sunrise Theater across the street from the rail station still bears “Downtown Divas” signage from a drag show that drew far-right protesters this past Saturday when the outage began. 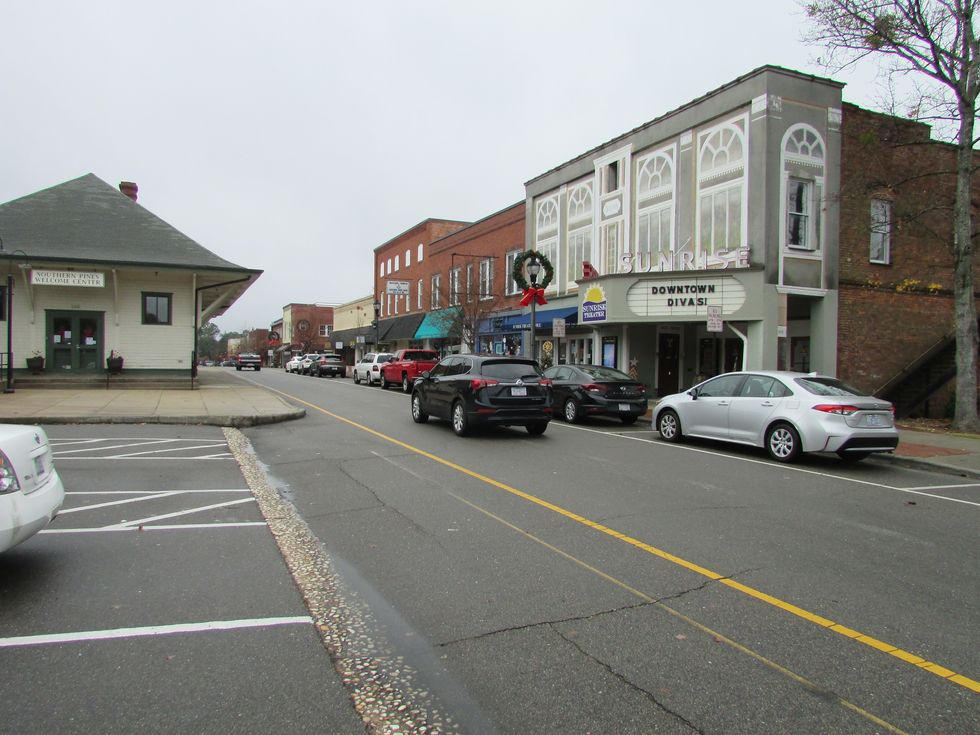 The marquee at the Sunrise Theater in Southern Pines still bears the signage from the "Downtown Divas" drag show that was the focus of a protest when the power went out on Saturday night.Jordan Green

Fort Bragg, the largest military installation in the country, is the next county over, and Christy-Bowman said an influx of military veterans in recent decades has pushed the county in an increasingly conservative direction.

While no evidence has surfaced linking the attack on the power grid to controversy surrounding the drag show, the two events are difficult to disentangle due to vocal statements of a prominent campaigner.

Emily Grace Rainey, a former US Army captain who was forced to resign her commission for violating COVID restrictions, posted on her Facebook page shortly after the attack: “The power is out in Moore County, and I know why.” She later partially walked back the claim by saying she told investigators from the sheriff’s office “that God works in mysterious ways and is responsible for the outage.”

Rainey’s Facebook page lit up with outraged comments soon after the power went out.

“I think the other thing that people in the community are very angry about right now is certain political high-profile people going on to social media and saying that it was God punishing us for our iniquity and our sin,” Christy-Bowman said. “And I would point out for the record that all of this talk about it being connected to the drag show did not start until someone stepped forward and said that they knew why it happened and it was God’s punishment for the drag show. That caused a lot of anger.”

Rainey, who posed with the Proud Boys during a recent protest against a drag show in nearby Sanford in October, was able to parlay her notoriety into an appearance on “War Room,” the podcast hosted by Steve Bannon, on Monday. Rainey’s interview skirted the details about the power outage and omitted any mention of her provocative statement, while providing her with a platform to disparage the drag show as a “type of red-light district adult entertainment” that has doesn’t have “any place in our very family-friendly conservative Christian downtown.”

Christy-Bowman said she has searched herself to try to understand why Moore County was the target of the attack.

“I have wondered personally if it’s not because of the political fracturedness of our community,” she said. “I have wondered if it’s not because whoever did this knew that we would start pointing fingers at one another right off the bat, and it would cause enough disruption in law enforcement with everyone calling in tips that they would not be able to focus on who the real perpetrator is.”

Raw Exclusives SmartNews
Please contact support@rawstory.com for customer support or to update your subscription. Report typos and corrections to: corrections@rawstory.com.