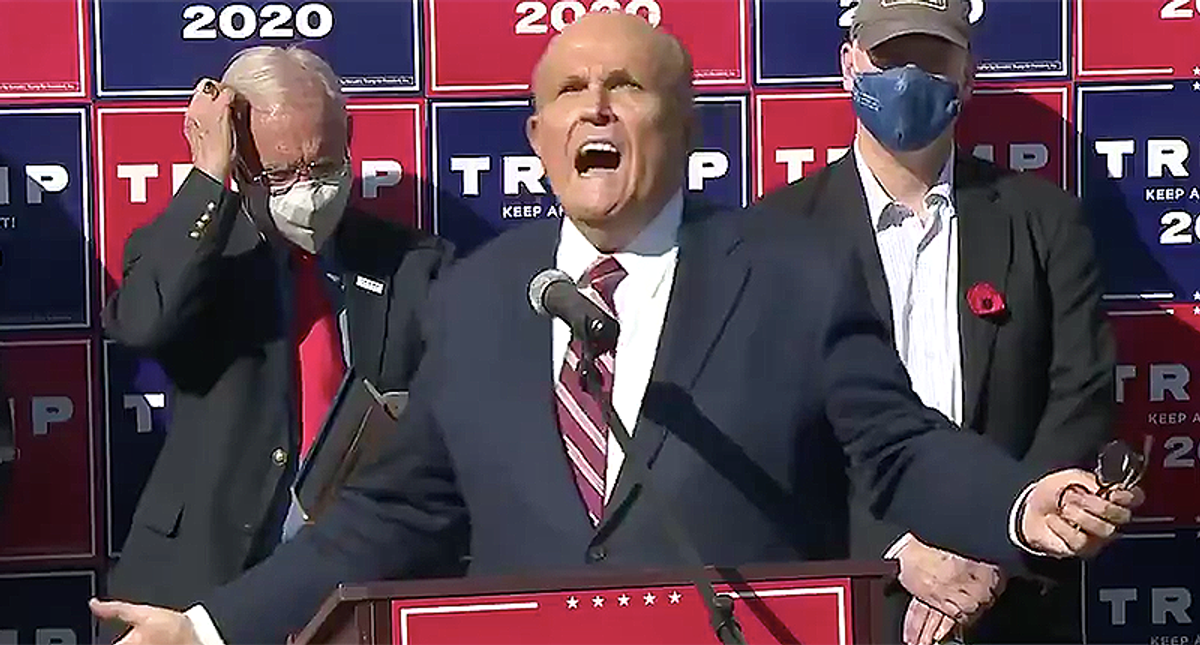 According to a report in the Daily Beast from Eileen Markey, the man that Rudy Giuliani has become in the service of former President Donald Trump is exactly how New York City voters viewed him in a suppressed opposition report he ordered in 1993 to figure out his vulnerabilities prior to his run for New York City mayor.

As Markey notes, Giuliani ordered the report so that he could anticipate attacks that would come from his political foes digging for dirt after his service as a U.S. Attorney and in Washington.

According to the Beast's reporting, Giuliani -- who was sworn in as the mayor of America's largest city in 1994 -- was displeased with what he was handed and ordered all copies to be destroyed and the author of the study to remove all evidence of it on any computer on which it have been reviewed.

However, copies survived and one fell into the hands of Village Voice reporter Wayne Barrett who was slipped the document "from a source in a late-night, side-of-the-highway handoff," which he then used as source material to write his "Rudy! An Investigative Biography of Rudy Giuliani."

According to Markey, that copy -- 464 pages in all -- now resides in the Briscoe Center for American History at the University of Texas at Austin. Another copy was later found in Barrett's apartment.

What it discloses can be summarized by headings in the report including: "Racist," "Shameless Publicity Seeker," and "Overzealousness," which is highly reflective of his demeanor as he has served as an attorney for Trump while trying to dig up dirt on Joe Biden and come up with evidence that there was voting fraud in the 2020 presidential election that Trump ended up losing.

Markey notes that -- presaging the U.S. Capitol riot on Jan 6th following the Trump "Stop the Steal" rally -- Giuliani was believed to have been behind a police riot in 1992.

As Markey reports, "Standing on a flatbed truck, Rudy gave a shrieking, curse-laden speech to a sea of riled-up cops who opposed the establishment of an all-civilian police oversight board. Armed off-duty police stormed over barricades, blocked the entrance to City Hall, disrupted traffic on the Brooklyn Bridge, assaulted reporters and harassed two Black city council members. Carrying signs with racist caricatures of the African American mayor, David Dinkins, and shouting racial slurs, the 10,000 off-duty police caused thousands of dollars of property damage, stomped on cars until they dented them and battered the windows of City Hall."

Giuliani's attempts to dig up dirt on the Bidens -- including coming up with a laptop belonging to the president's son Hunter -- has echoes from an illegal search conducted under his direction in his early years.

"Years earlier, while serving as deputy to the Associate Attorney General in the Ford administration, Rudy oversaw dirty tricks operations that would have done Roger Stone proud—and when he got called out for it, he tried to scuttle the career of the man who objected to his heavy-handed methods. In a sprawling tax evasion case called Operation Haven, federal agents under Rudy's control illegally obtained evidence by paying an informant to break into the Miami hotel room of the deputy director of a Bahamian bank and remove documents from his briefcase," the Beast report before adding, "In the same investigation Rudy had IRS investigators track the sex life of a Florida judge and steal a Rolodex stuffed with potential leads. The tainted evidence hobbled a major investigation. When IRS Commissioner Donald Alexander put a stop to the overzealous caper, Rudy tried to convene a grand jury investigation of him, nearly ruining Alexander's career."

The report goes on to note that Giuliani's staffers worried his career would be derailed if information about his persecution of Alexander became public.