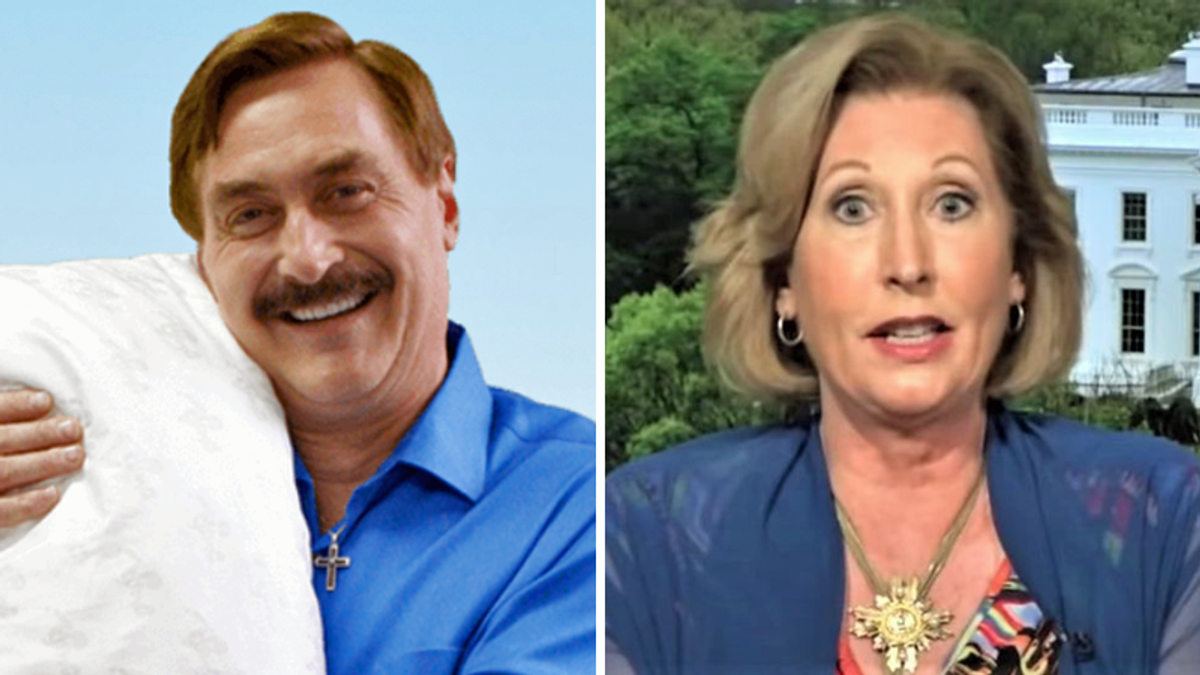 "Today we are proud to announce the formation of Restore the Republic PAC, which will be dedicated to supporting candidates who will fight vigorously for our Constitutional rights, freedom of speech, and the sacred right of free and fair elections...The American people deserve a voice that exposes and rejects the self-interest of political parties, the control of tech giants, and the lies of the fake news... Join this new endeavor co-founded by Mike Lindell and Joe Flynn at www.RestoreTheRepublicPAC.Com"

As required by the FEC, they listed the bank they'll be using: Arkansas-based Bank OZK (formerly known as Bank of the Ozarks).

But a day later, a spokeswoman for the bank told Raw Story that not only does the company have nothing to do with the new political action committee, it doesn't even handle that kind of banking.

"We have done a thorough inquiry and determined this entity has no account at Bank OZK, has no account pending, and has never had an account here. Per our established policy, the PAC is not eligible for an account with Bank OZK," Susan Blair, executive vice president and spokeswoman for Bank OZK, said. "We have policies in place prohibiting accounts for certain entities. We don't publicly disclose the specifics of those policies."

PACs are legally required to have separate bank accounts, rather than accounts commingled with, for instance, the personal money of a PAC treasurer. Filing false information to the FEC could be a federal crime, said agency spokeswoman Judith Ingram. She said the agency has a process for confirming that information campaigns or committees submit is accurate, including potentially "questionable contact or bank information."

Usually, the agency will send a letter to a PAC, including a reminder that "knowingly and willfully making any materially false, fictitious, or fraudulent statement or representation to a federal government agency, including the Federal Election Commission, is punishable," under federal law, she said.

Still, even though it is a felony to make false statements to the FEC, the agency would not likely target Powell and her collaborators with legal action if the group cleans up its statement of organization, said Brett Kappel, a campaign finance expert at the Washington, D.C., law firm Harmon Curran.

"Realistically, they probably listed the Bank of the Ozarks as the campaign depository because they intended to open an account there and will be surprised when they find out that it's against bank policy," he said. "If they will open an account with another bank and file an amended Statement of Organization, the FEC will probably give them a pass."

Powell and Binnell did not respond to separate emailed requests for comment.

It remains to be seen, however, what financial institution would want to hold money for a super PAC headed by Powell, who promoted conspiracy theories about rigged voting machines, and Lindell, who was captured in photos at the White House earlier this month carrying notes that appeared to include the suggestion that Trump invoke martial law or the Insurrection Act.

Corporations, driven by public outcry after the violent attack on the Capitol by Trump supporters earlier this month that resulted in five deaths and a military lockdown in Washington, D.C., have been going to lengths to distance themselves from the politicians or political figures who pushed the discredited notion that President Joe Biden did not actually win the election.

Just last week, following a public outcry on Twitter, the Loews Hotels chain cancelled a reservation that Sen. Josh Hawley had previously booked for a February fundraiser at their Orlando resort, noting the company is "horrified and opposed to the events at the Capitol and all who supported and incited the actions."

Meanwhile, companies from GE to Coca Cola to Facebook have paused political action committee donations, with some companies even singling out and freezing donations to the 147 Republican lawmakers who objected to the count of the Electoral College votes just hours after the Capitol had been cleared of rioters.

Major financial institutions like JP Morgan Chase, Bank of America, Citigroup and Wells Fargo have all made statements noting they would either pause donations to candidates or political action committees, or factor the Capitol riots into their decision-making when it comes time to cut political checks. That begs the question whether the same institutions would agree to hold money for a group whose stated aim is to continue to promote the same conspiracies.

In fact, it seems like it's just bad PR. The fact that Bank OZK's is not involved in the machinations of this super PAC may save the relatively small regional lender a headache; some Twitter users had already been tagging the financial institution on Twitter, asking questions such as, "Do you want your bank's reputation to be linked with this person who fought tooth and nail to overturn our election without *any* evidence?" and "Y'all support insurrection dollars and misinformation frenzied donations running through your bank???"

Though the FEC documents only cite Powell and Binnall's involvement in the PAC, Powell noted on social media that she's partnered in the effort with "MyPillow guy" Lindell and Joe Flynn, the brother of Trump's former national security advisor Michael Flynn, who has promoted QAnon and the Capitol Stop the Steal rally.

Powell, who has been banned from Twitter for promoting QAnon conspiracies, shared a screed outlining the PAC's goal on her account on Telegram, a social media site favored by right-wing extremists. She intimated that the super PAC would be used to target political candidates in both the Democratic and Republican parties who do not believe that the election results were fraudulent.

"The PAC will promote candidates who fight for truth and the Rule of Law, and we will strenuously oppose any candidate who discards the Constitution for his own short term or political gain—regardless of her party," Powell wrote. "Eighty million people were just disenfranchised by the inauguration of a President not elected by lawful votes. The Democrats abandoned their base and the Republicans betrayed theirs."

Powell has also started a similar group called Defending the Republic, which notes on its website that it is not yet taking donations as the group's 501c3 nonprofit status is pending.

The bank snafu marks an inauspicious start for the PAC, though it is not the first time Powell has filed erroneous documents to a government. Her legal team caught bad press after filing court challenges to the election results that were rife with misspellings, geographical errors and just plain false information.

It's also not clear how involved Trump or his team are in this new effort. The super PAC lists its address as a UPS Store a roughly 25 minute drive from Trump's Mar-a-Lago resort in Palm Beach, Florida. Powell's practice is based in Dallas and Lindell lives in Minnesota.

Powell alleged a vast conspiracy in which several states' elections were falsely skewed in favor of Biden by manipulated electronic voting machines run by a company with alleged ties to the late Venezuelan president Hugo Chavez. The lawsuits in states such as Arizona, Georgia, Michigan and Wisconsin were thrown out. Powell filed an appeal challenging the results in Georgia directly to the Supreme Court, but withdrew the lawsuit earlier this week.

Police are looking for a man who went after an Asian family sitting in their car at a Burger King drive-thru in Richmond, British Columbia, reported CTV.

In a video captured by the family, the grey-haired white man walked up to their SUV and started yelling at them.

The Wall Street Journal editorial board is offering a critical assessment of House Republicans' vote to oust Rep. Liz Cheney (R-Wyo.) from leadership, warning the move will not nix the party's problems ahead of the 2022 primary election.

In fact, the board ward the GOP could face deeper consequences in the long term for its failure to address the real problem: the haunting existence of former President Donald Trump, a political nightmare which the publication describes as Trump's "purgatory."

I don't pay a lot of attention to policy. I don't care enough about the particular details to say with any confidence which one is better and which one is worse. I do care about policy outcomes. So I'd take the so-called public option. I'd take Medicare for All, too. Yes, one is a small step. The other is a big step. Both, however, arrive at the same place eventually, which is universal health care. Either way, I know one party is going to lead us in that direction generally while the other is going to lead us nowhere in a hurry.