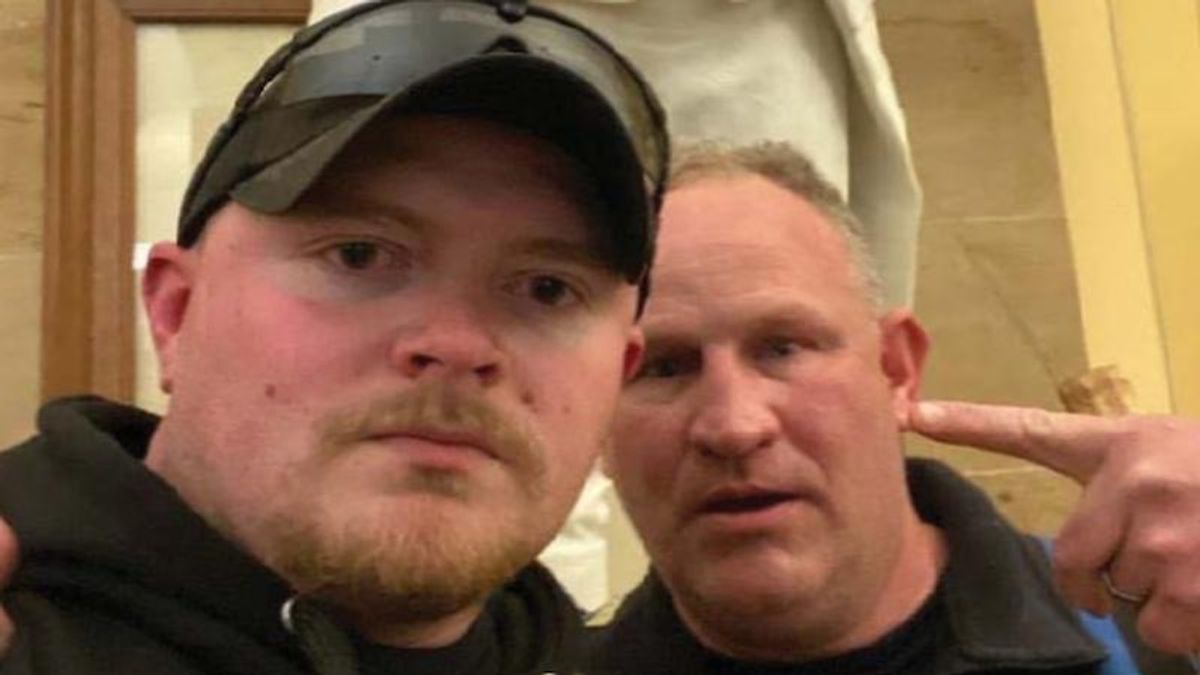 Thomas Robertson, right, and Jacob Fracker inside the Capitol.

Federal prosecutors are seeking to revoke the pre-trial release of a former police officer charged in the Jan. 6 Capitol insurrection, after he purchased 34 guns. Investigators also found a partially assembled pipe bomb at his home.

Thomas Robertson, a former police officer in Rocky Mount, Va., was ordered by a judge not to possess guns following his arrest on several charges stemming from the insurrection, including felony disruption of an official proceeding and misdemeanor disorderly conduct in a restricted building. Robertson and another Rocky Mount officer, Jacob Fracker, were fired in the wake of their arrests after they posted photos of themselves inside the Capitol on social media.

Prosecutors filed a motion to revoke Robertson's release on Wednesday, after FBI agents served a search warrant at his home, where they found the pipe bomb inside a box labeled "booby trap" in addition to numerous boxes of ammunition. Authorities also tracked online gun purchases made by Robertson, who was allegedly storing his arsenal at a local firearms dealership.

"The defendant's possession of an explosive device and firearms, coupled with his extreme rhetoric advocating for violence indicating no remorse illustrate that the pending charges are unlikely to serve as a deterrent to future violence. For these reasons, the defendant should be detained," prosecutors wrote.

Days after the insurrection, he wrote on Facebook: "The picture of Senators cowering on the floor with genuine fear on their faces is the most American thing I have seen in my life. … The only voice these people will now listen to is VIOLENCE."

He added: "CNN and the Left are just mad because we actually attacked the government who is the problem and not some random small business ... The right IN ONE DAY took the f***** U.S. Capitol. Keep poking us."

On June 10, Robertson posted a screenshot of a Department of Justice website documenting the charges against him on GunBroker.com, the auction site where he had been purchasing many of the weapons.

"Another user of the website posted the question, 'Are they proud too?' Robertson responded, "I sure as f*ck am,'" according to the motion.

Robertson then wrote: "I've said before. They are trying to teach us a lesson. They have. But its definitely not the intended lesson. I have learned that if you peacefully protest than you will be arrested, fired, be put on a no fly list, have your name smeared and address released by the FBI so every loon in the US can send you hate mail. I have learned very well that if you dip your toe into the Rubicon. . . . cross it. Cross it hard and violent and play for all the marbles."

Read the full motion below.