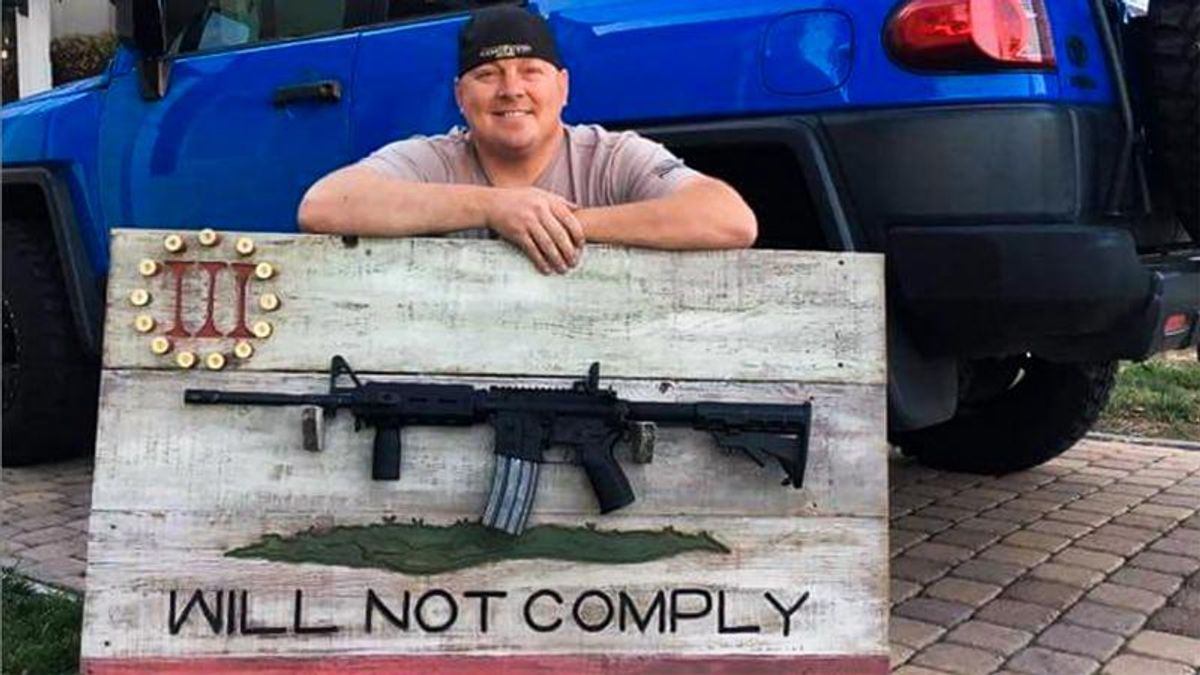 The California sheriff's deputy brother of actor Chris Pratt has a side business making decorative wood carvings that sometimes feature symbols associated with a far-right extremist group whose members took part in the deadly Jan. 6 insurrection.

Solano County sheriff's deputy Daniel "Cully" Pratt makes some carvings of characters from his brother's movies, such as "Jurassic World" and "Guardians of the Galaxy," as well as others that reference the Three Percenter gun militia -- which other members of the sheriff's office appear to support, reported Open Vallejo.

One piece made for Sgt. Roy Stockton, a colleague and recently elected Vacaville City Council member, resembles a California state flag, but with the militia's "WILL NOT COMPLY" slogan and 13 shotgun shells arranged like stars around the Roman numeral III.

In case the symbolism wasn't clear enough, Pratt labeled a 2018 Instagram post showing his creation with the hashtag "#3percenter."

Pratt, Stockton and at least one other current deputy have posted Three Percenter imagery on their personal social media pages for years, according to Open Vallejo, as they have been promoted in the sheriff's office and trusted with high-profile assignments.

Several of the loosely organized militia's members have been charged in connection with the U.S. Capitol riot that left five dead, including a police officer, and the group's adherents have been implicated in other violent plots and activities -- including a northern California man with a Three Percenter decal on his vehicle who was arrested last month on explosives and weapons charges.

One of the suspects in a plot to kidnap Michigan's governor was the leader of a Three Percenter group, and others associated with the Three Percenter movement have been charged in plots to kidnap and kill police officers, blow up mosques and bomb banks.

Stockton also sells handmade items that reference right-wing themes, such as knife clips and bottle openers, and the deputy has shared numerous Facebook posts with Three Percenter graphics and a photo just before the 2016 election showing several guns with the caption, "getting ready for the election tomorrow."

Stockton condemned "violent and racist views of these extreme right, militia, and anti-government groups" in an email response, and said "law enforcement officers and other public officials cannot keep their oaths to uphold the Constitution if they are associated with any extremist or anti-government groups."

Deputy Dale Matsuoka, the sheriff's office homeless outreach coordinator, has also posted Three Percenter graphics on his own Facebook page, which uses several aliases, and his posts are often supported by other current and former law enforcement officers.

A perusal of the deputies' social media accounts show them interacting with other law enforcement officers or public employees while displaying Three Percenter and other far-right symbols, including county public works employee Galen "Jamie" Estes, who has been photographed with a "molṑn labé" sweatshirt and a Three Percenter tattoo.