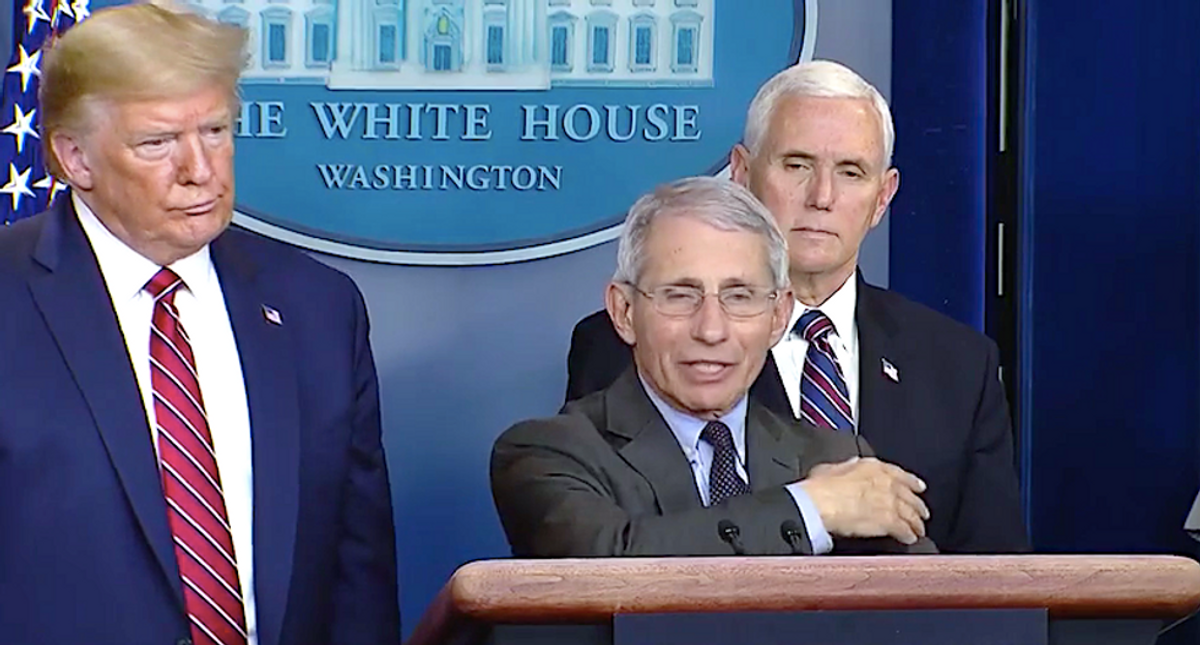 Speaking to MSNBC on Tuesday, Washington Post reporters Carol Leonnig and Phil Rucker revealed that in their new book, I Alone Can Fix It, that President Donald Trump was furious at how popular Dr. Anthony Fauci was over him.

At the same time, the public health experts could never get Trump to understand how vital testing for the novel coronavirus was, as all he appeared to care about was how his infections numbers appeared.

According to Leonnig, Trump had no patience for the science and its complications.

"Any of the complications of, for example, the fact that you need to have trials before you give drugs to hundreds of millions of Americans," she explained. "He had no patience for this idea that testing was really valuable to figure out where the virus was spreading so that they could stop it. Remember, in the beginning, Donald Trump didn't want anybody tested and he didn't want anybody who was positive to step onto American soil."

She said that exasperation with Trump's reluctance to take the virus seriously was near universal in his administration.

"It's just sort of stunning," Leonnig continued, "because it happened for every single member of the insider team who was working so diligently to fight this virus. They had to come smack up against the president all the time. Alex Azar, Tony Fauci, Deborah Birx, Seema Verma, everyone had this horrible moment where they tried to get him to do the right thing and he resisted them because it didn't play well on the evening news."

Rucker noted that it wasn't just resistance to the science. Ultimately, Trump began to lash out at the actual scientists because people wanted to hear from them and not from him.

"It's not just [Trump's] resistance to the science, but it's his hostility and an attempt to personally demonize the scientists," said Rucker. "So, he didn't just reject what Dr. Fauci was saying, but he tried to make Dr. Fauci into a punching bag for his political base. Trump and his allies made fun of Fauci. Remember that cartoon that Dan Scavino distributed on social media mocking Fauci. Fauci ended up having death threats."

That GOP takedown of Fauci has continued until today, as the infectious disease expert fact-checked Sens. Rand Paul (R-KY) and Roger Marshall (R-KS) for spreading the lies.