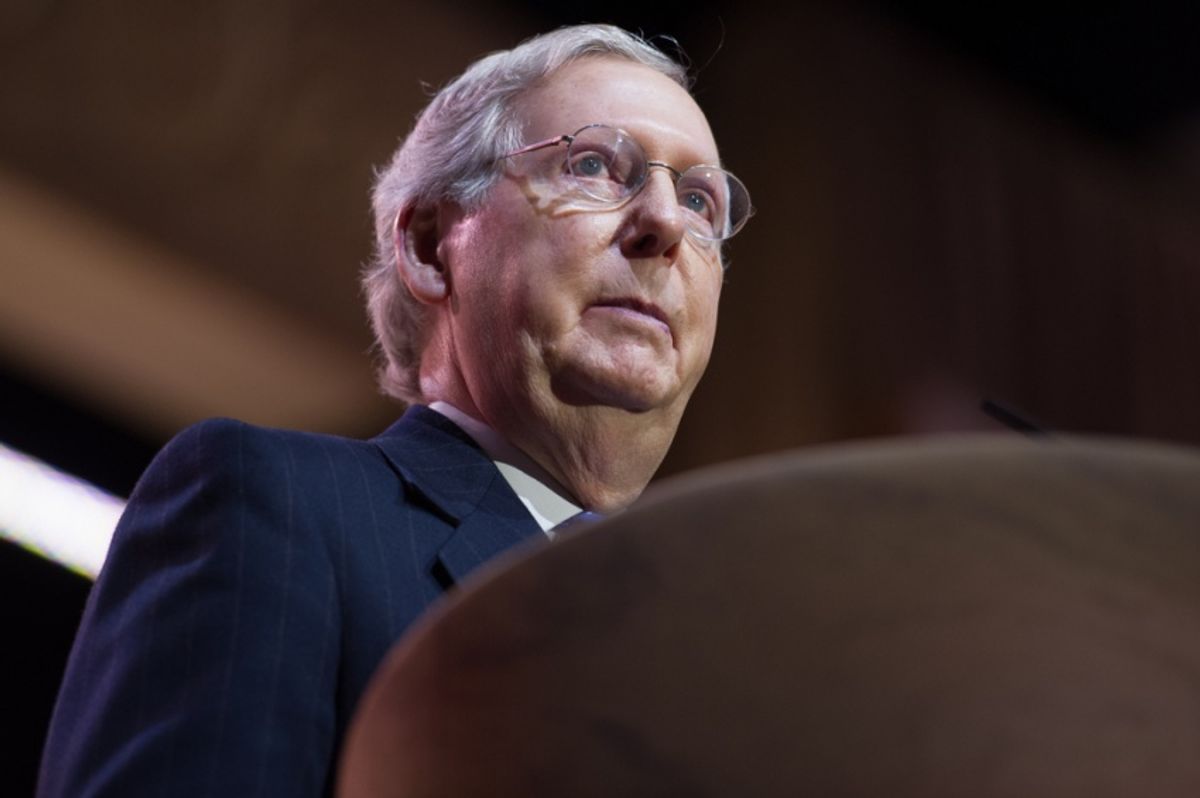 According to longtime political analyst David Lurie, Democrats should set aside any plans they may have to block Donald Trump from running for president again, claiming that, by giving the ex-president free rein, it will undermine Senate Minority Leader Mitch McConnell more and further cripple the Republican Party.

In his column for the Daily Beast, Lurie notes a drive to use the 14th Amendment to ban Trump from holding office, as detailed in a column in The Nation by John Nichols. According to a letter sent to Democratic leaders, they were urged to "Pass a resolution with factual findings and expressing its view that Section Three applies to former President Trump. Though a resolution would not have the force of law, it would cast a cloud over any future candidacy by Trump and provide grounds for further actions challenging a future candidacy."

According to Lurie, a better long game would be to give Trump a pass and let him take out his anger on Republicans -- including McConnell -- thereby creating chaos within the Republican Party as the two engage in a power struggle.

"McConnell exemplifies the GOP's self-created Trump problem at a time when 46 percent of Republicans say they would leave the GOP for a Trump party and just 27 percent say they would stay," Lurie wrote before adding, "As McConnell recognizes, however, an increasing majority of the nation's voters recoil at the toxic stew that leaders like him have allowed the Republican Party to become, as demonstrated by Trump's electoral loss, as well as that of the Georgia Senate candidates who modeled themselves on him."

Detailing the cold war being conducted against Trump by McConnell after he didn't vote to convict the ex-president during his second impeachment trial -- only to deliver a blistering speech on the floor of the Senate blaming the former president for inciting the Jan 6th insurrection -- the columnist suggested leaving Trump on the battlefield to bedevil the senior Republican leadership.

As Lurie points out, the chances of Trump being a viable candidate again is problematic for a variety of reasons.

"While Trump's reactionary views remain ascendant in the GOP, much of his personal power as a political leader comes from his threat to be a candidate for president in 2024. That prospect is likely chimerical. The 74-year-old faces a huge number of legal and business challenges that are very likely to consume much of his remaining years; and Trump could well be facing a prison term by the time the presidential primary season heats up," he wrote before adding, "But while the Democratically controlled Congress likely has the power to disqualify Trump from running for office again, doing so would not be prudent. As McConnell knows better than anyone, so long as Trump remains the leader and face of the GOP, he will remind swing voters of the sewer of extremism, and outright opposition to democracy, the party has become, an identity that is simply unacceptable to large swaths of voters, and could doom McConnell's plans to retake the Senate, just as it doomed the GOP Georgia runoff candidates weeks ago."

"With the GOP in a political bind of its own creation, Democrats would be wise not to give McConnell and other GOP leaders the gift they have been not so secretly pining for ever since the election: The compelled political retirement of Donald Trump," he advised before concluding, "Trump is the GOP's problem; let the Republican Party live with him, for as long as possible."