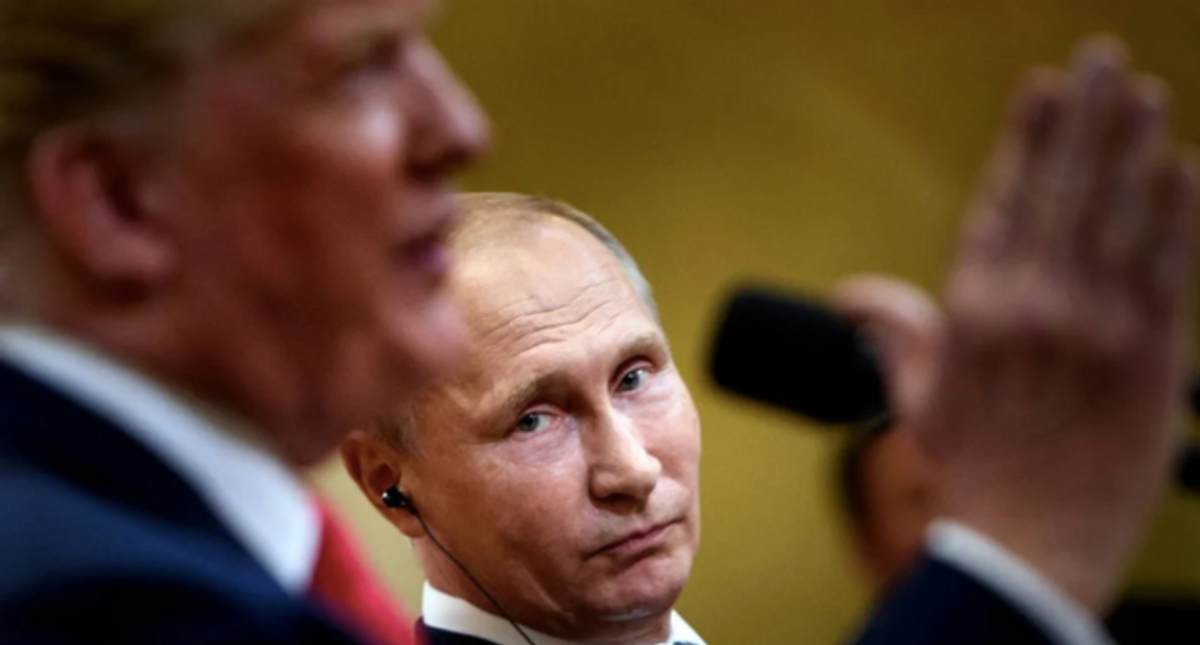 One need not dabble in conspiracy theories to ask a simple question today: What should be done about Donald Trump having served as a Russian asset for the past four years?

In the wake of the recently revealed Russian cyberattack on the U.S. -- apparently unprecedented in its danger to national security -- it's time for Congress, the media and the incoming Biden administration to move beyond the question of "if" Trump was helping his overt ally, Russian President Vladimir Putin. The relevant questions are why and how.

With the nation preoccupied with removing Trump from the White House without force, the timing might not seem ideal. But the results of Putin's engagements with Trump are too many and too obvious: Someone needs to connect the dots.

Today's 24/7 news cycles are not suited for this task. They rely upon the instant gratification of breaking news stories as they present themselves, not analysis of how events might fit into a pattern of conduct. When Trump outrageously refused to condemn Russia this week for its massive hacking crime, the general reaction was puzzlement and outrage among the chattering class. It should have been a sense of confirmation followed by a timeline.

Trump leaves office with an unknown number of Russian spies and intelligence experts in possession of an unknown treasure trove of sensitive private information held -- for starters -- on federal systems at departments including Homeland Security, Treasury, Commerce and the National Nuclear Security Administration, CNBC reports.

"Susan Gordon, former principal deputy director of national intelligence, told CNBC that the massive cyberattack targeting federal agencies 'will take years to overcome' as senior intelligence officials report there is little doubt the Russians were the perpetrators and that they're still at it."

That has a "mission accomplished" feel about it for the folks back home in Moscow. So rather than wonder why Trump isn't acting upset, perhaps the media should be asking, "What did Trump know about this hacking and when did he know it?"

An American president's refusal to push back publicly and strongly against a major hostile act by an adversary is more than a matter of bad optics. At best it's a display of humiliating weakness. At worst, it's an act of surrender and -- in Trump's case with Russia -- a strong suggestion of complicity.

What's fascinating is that the reporting is all out there on this topic, but the cohesion of a clear narrative doesn't hold from one major story to the next. On October 25, the Washington Post published an epic piece documenting Trump's history with Russia headlined "Tumult at home, ailing alliances abroad: Why Trump's America has been a 'gift' to Putin."

The Post's reporting was hardly unique. In 2019, CNN recounted "37 times Trump was soft on Russia." The New York Times published a definitive op-ed piece in 2018 from national security expert Susan Rice headlined "How Trump Helps Putin." On and on it goes. So why the stunned indignation today when Trump wouldn't even criticize Putin -- much less condemn him -- for what was essentially an act of war on the nation he's sworn to protect?

There's no mystery here. Trump's fealty to Putin has been an ongoing national scandal in full public view, perhaps so blatantly that the nation is numbed to its traitorous essence.

Here's a list of "Trump's Greatest Hits as a Russian Asset" assembled from a variety of sources. The ordering is subjective, but not the facts:

This list could on for quite a while. Perhaps for those not willing to see it as proof of his complicity with Putin, the question might better be worded: "If Trump isn't a Russian asset, why did he do all these things to help Putin?"

Still, the story hasn't come together in its fullness. It's a bitterly ironic note that media have become hamstrung by one of the biggest of Trump's Big Lies: That all the investigations into his sleazy and criminal interactions with Russia were nothing more than a "hoax." There's no reason for self-consciousness by the media, nor for holding back on "the Russia, Russia, Russia" story, but strangely that is what has happened.

For example, the much-maligned Mueller Report is treated like it never existed. Yes, it fizzled as grounds for impeachment for reasons of process and politics utterly unrelated to its damning substance. But it broadly torpedoed Trump and his conduct for anyone who read it. That he has been able to use Mueller fatigue to escape scorn for what it contains is a testament to the power of disinformation.

The Mueller report remains totally relevant as context for the Trump-as-Russian-asset story. I've separated it here from the main list of examples, not because many of its findings don't belong there, but because it serves best as a baseline for understanding the rest.

To refresh memories, here are some key conclusions of the Mueller report -- as recounted by the Guardian -- which provide a baseline from which one might jump to understand Trump's relationship as president with Russia:

Mueller also pointed out at least 10 instances in which Trump acted in a way that might have led to obstruction of justice charges were he not president. And let's not forget this passage from the Mueller Report:

"[T]he investigation established that the Russian government perceived it would benefit from a Trump presidency and worked to secure that outcome, and that the campaign expected it would benefit electorally from information stolen and released through Russian efforts."

Add to all this Trump's countless relationships with shady figures such as Paul Manafort with their Russian connections, and those hazy efforts at business dealings -- including the fateful 2013 Miss Universe visit to Moscow -- and the refusal to release tax returns that might show some of Trump's Russian business affairs. It's not a pretty picture. If Trump owes Russian interests as part of the gigantic foreign debts facing him after office, it's downright ugly.

Now, return to the current news that somehow, some way, Putin's hackers managed to pull off one of the greatest espionage coups in history, at U.S. expense, on Donald Trump's watch. And Trump, it turns out, is the only one in the U.S. unfazed by it all as he focuses instead on staying in office by military coup.

If all those dots cannot be connected, someone needs a new Sharpie.