The Trump Store joins the War on Christmas 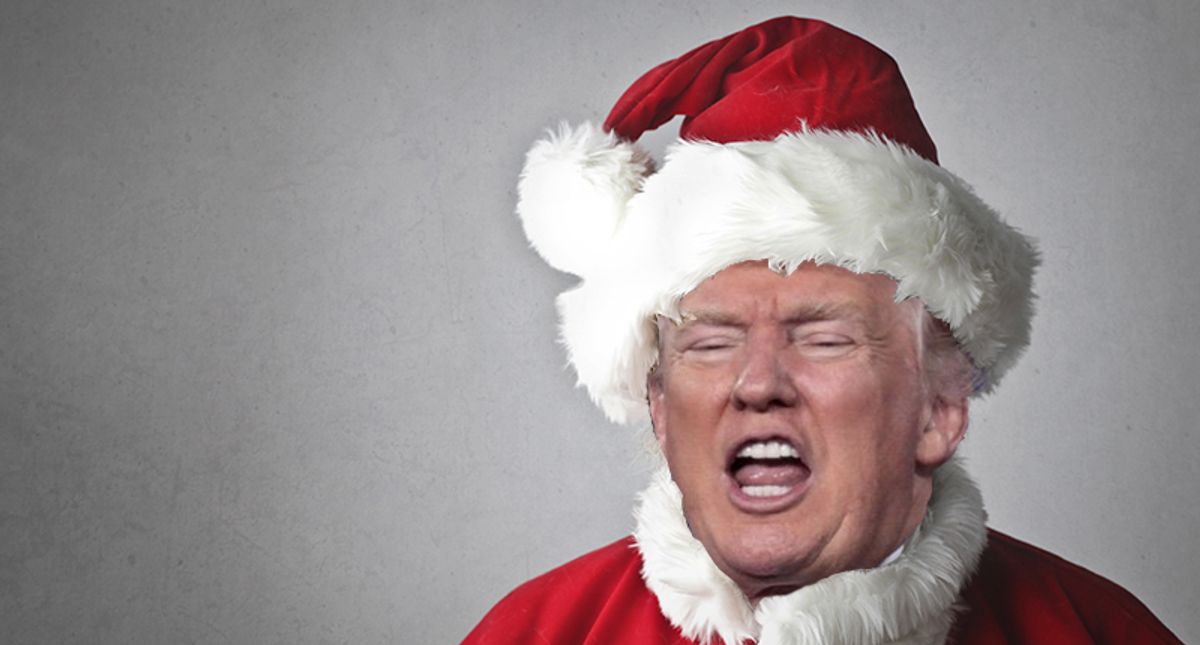 You know things are bad for Donald Trump when his own online store bails on him.

If you visit www.trumpstore.com, the first images you'll find are scrolling advertisements at the top of the page for "The Holiday Gift Guide" and "The Holiday Entertaining Guide." No message of Christmas, much less the Lord. Apparently, his own commercial website has been taken captive in the War of Christmas.

This isn't breaking news: The apparently anti-Christian hatred of Trump's business enterprise was first revealed two years ago by The Guardian.

But it is important to know that things have actually gotten worse. After visiting the website in a futile search for marked-down MAGA dreidels, I decided to employ several minutes of investigative reporting skill to determine what the deep state has wrought by infiltrating the Trump store. It's swampier than one could ever imagine.

First, I searched "Christmas" and got 0 results. Ditto for "Jesus" and "Fake News." But then I realized the worst was in plain view for everyone to see without a search.

Get this: The very first item featured on the very first page of the site is promoting a "Snowflake Mug Set of 2" for just $40. A SNOWFLAKE MUG AT THE TRUMP STORE?? Are you kidding me? This must be the work of a mole planted by Omarosa.

It doesn't get much better with the other three top-line items if you're a decent, upstanding member of the Trump base. There's a "Trump Chocolate Gold Bullion Bar" that sounds suspiciously French, a Lattice Embossed Throw that sounds -- well, let's just say, not manly -- and a "Collegiate Trump Crew Neck" in the color "oatmeal" that just screams elitism.

Row 2 of the gifts are only slightly better. There's a Trump teddy bear, more bullion and something called a "bistro mug" -- hardly items you're likely to find at the souvenir stand at a Trump rally -- before you finally can get to a Trump "Digital Camo Hat," at long last.

The third row has just two items, and they also seem wrong. One, is a $68 "Performance Solid Micro Pique Polo" pictured in turquoise, a RINO-sounding item if ever there was one. The other is really a cheap shot. It's the only prominently advertised item that's marked down: A Trump Signature Collection Pen, regular price $25, now marked down to $19.99.

So Trump's signing pen has been discounted even as he fights to "Stop the Steal" with nearly four weeks left to undo the greatest electoral fraud in American history? And, no, in case you're wondering, there are no results when you search "steal" or "fraud" or anything else that might be worth putting on a Camo Sports Canteen.

Now you can get a Trump Camo Sports Canteen as a sale item. But as proof of corruption that Sebastian Gorka, John Solomon and Steve Bannon simply must pursue, someone infiltrated the Trump store with a "Trump Chicago Gift Set," a "Los Angeles Photo Wrap Mug" and a Trump "Tropical Water Flower Bath Bomb."