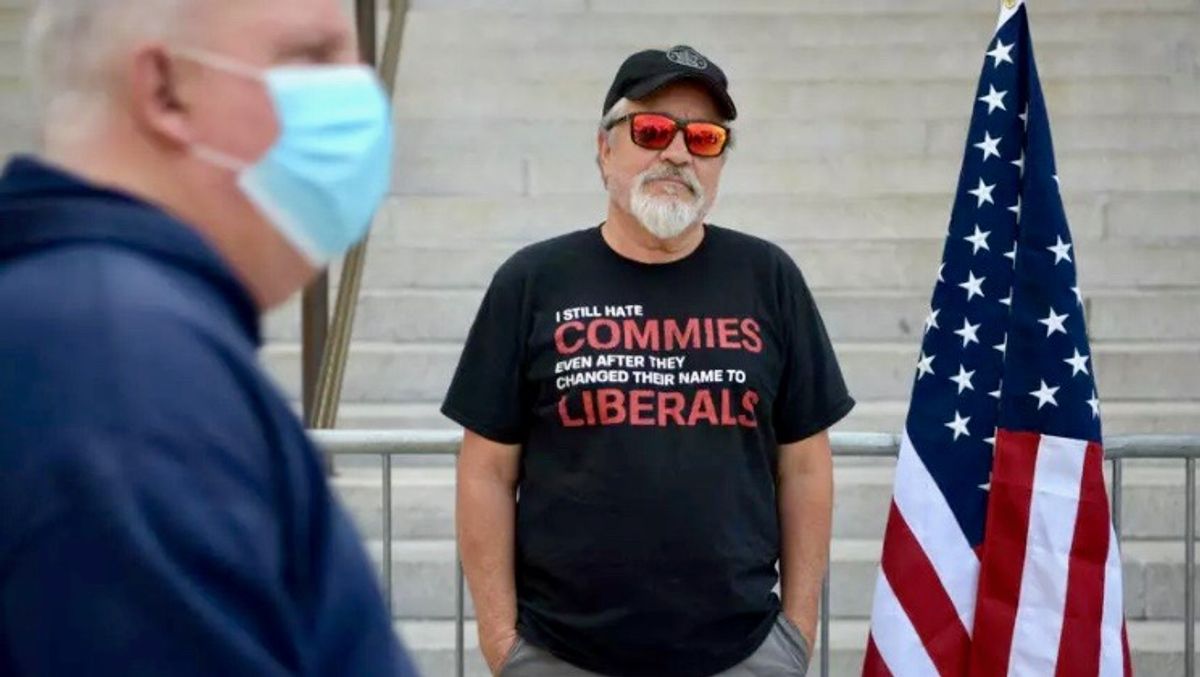 A man wearing a facemask walks past another standing with a US flag during a demonstration against stay-at-home orders near Los Angeles City Hall on May 1, 2020, amid the novel coronavirus pandemic. (Agustin Paullier, AFP)

More than half of U.S. adults have received at least one dose of the coronavirus vaccines, but public health officials worry that supply will outstrip demand before the nation reaches herd immunity.

A recent focus group found many Republicans would rather have a fake vaccination card than a real dose of the vaccines, and elected officials, business leaders and public health experts are trying to find ways to persuade skeptics and hesitant Americans to get the shots before COVID-19 variants find ways around those protections, reported the New York Times.

"If you think of this as a war," said Michael Carney, the senior vice president for emerging issues at the U.S. Chamber of Commerce Foundation. "We're about to enter the hand-to-hand combat phase of the war."

Within the next two to four weeks, the U.S. will probably run out of adults who would enthusiastically get vaccinated, according to a new study.

"It appears we are quite close to the tipping point where demand for rather than supply of vaccines is our primary challenge," wrote the authors of the KFF study. "Federal, state, and local officials, and the private sector, will face the challenge of having to figure out how to increase willingness to get vaccinated among those still on the fence, and ideally among the one-fifth of adults who have consistently said they would not get vaccinated or would do so only if required."

President Joe Biden has met his goal of making the vaccines available to all adults, and private businesses and doctors are now being tasked with convincing skeptics and hesitants -- who tend to be mistrustful of politicians and the media -- that the shots are safe and effective.

"The further we go into the vaccination process, the more passionate the hesitancy is," said GOP pollster Frank Luntz, who has been conducting focus groups on vaccine messaging. "If you've refused to take the vaccine this long, it's going to be hard to switch you."

His most recent group, which included 17 participants, found they were unmoved by pro-vaccine pitches from four doctors -- which included three GOP politicians and former Obama CDC director Tom Frieden -- assuring them the doses carried no long-term effects and certainly would not change their DNA.

"I was zero [on] the vaccine," said one participant, Tammy from Virginia. "I'm still a zero."

About 130 million adults have gotten at least one dose as of this week, and about a third of all adults -- 84 million -- are fully vaccinated, and most of the states with the highest rates historically have voted for Democrats in presidential elections, while GOP-leaning states are reporting the lowest rates of vaccination -- with some exceptions in each case.

"We're trying to really meet people where they're at — and that may be [a] physical location, it may be just making sure their questions are answered," said Anne Zink, chief medical officer for Alaska, a Republican-leaning state that leads the nation in the percentage of vaccinated adults.

However, more than 40 percent of Republicans say they don't want to get the vaccines, and although hesitancy seems to be on the decline -- many remain stubbornly committed to avoiding the shots.

"Much of this reluctance is really ingrained in partisan identity," said Patrick Murray, director of the independent Monmouth University Polling Institute.

Officials in Alabama, where just 19 percent of adults have been fully vaccinated, have been pleasantly surprised how open Black skeptics have been to messages from trusted local voices, but they did not anticipate such strong resistance from rural whites.

"There are states where they feel they have hit the wall," said Mike Fraser, executive director of the Association of State and Territorial Health Officials. "The folks that wanted it have found it. The folks that don't want it are not bothering to find it."

But the Biden administration and officials across the country are hopeful they can overcome that resistance to get the 70 percent to 90 percent needed -- including children, who aren't approved yet for the shots -- to reach herd immunity.

"When we do polling and we do focus groups, what we do not hear that frequently is people that are adamantly opposed to ever getting vaccinated," said Joseph Kanter, Louisiana's health officer. "What's much more common for us to hear is people that aren't sure, they have questions, they're on the fence, they want to wait and see, they want to talk to people."