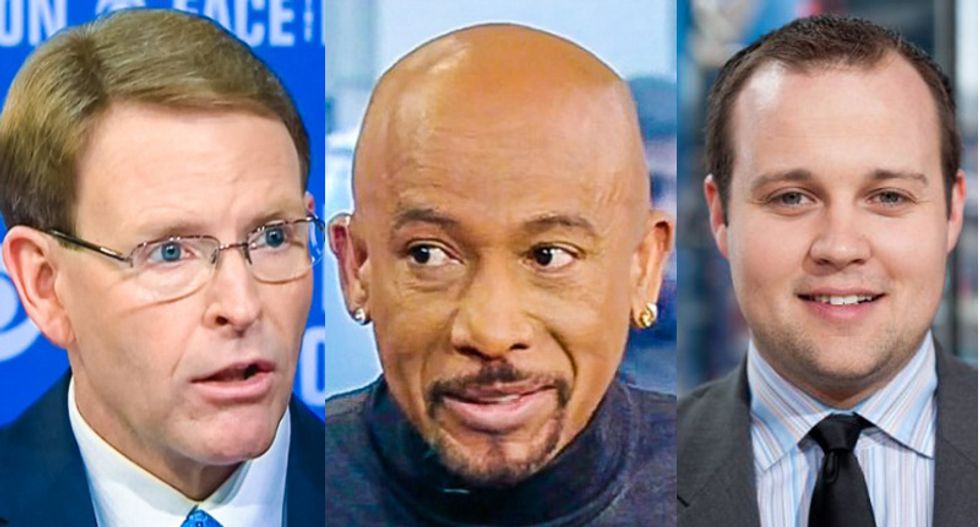 Television personality Montel Williams continued his attacks on Josh Duggar and his family, moving from Twitter to his Facebook page Friday night and expanding his assault on Duggar's former boss, Tony Perkins of the Family Research Council.

On Thursday, Williams called Josh Duggar a "Slimebag" tweeting, "Sorry, Josh Duggar is a bigot, slimebag. Whole family is, and FRC is a scam. Yup, Gay people are the danger to kids? NOPE, JOSH DUGGAR IS."

Criticized on Facebook by self-styled evangelist Joshua Feuerstein who wrote, "You are a has been [sic] washed up piece of crap.. But Jesus loves you! That's what amazes me," Williams expanded upon his comments about Josh Duggar and the FRC.

"What this guy, and frankly what Duggar, his parents, his former employer apparently don't care about is we have an epidemic of anti-#lgbtyouth killing themselves over being relegated to second class citizenship by hypocrites like Duggar and charlatans like Tony Perkins, " he wrote. "WHEN IS THE LAST TIME AN LGBT teen getting picked on trended on Facebook all day? When has one gotten the attention I did today as they are assaulted by rhetoric from the Duggars of the world telling them they are "mistakes" or that which they cannot change is a blasphemy, or worse, telling them they are deviant dangers to kids"

Williams went on to call what the Duggars and Perkins engage in, "Rhetorical terrorism."

"We need to start calling the rabid anti-#lbgt movement (not religious folks whose faith tells them being gay is a sin but yet take no action to discriminate against or demean/dehumanize those who are gay) what it is - RHETORICAL TERRORISM. "

The only response from  the FRC on the the departure of Josh Duggar -- after admitting he had molested his sisters when they were younger -- came from Perkins who issued a statement.

"Today Josh Duggar made the decision to resign his position as a result of previously unknown information becoming public concerning events that occurred during his teenage years. Josh believes that the situation will make it difficult for him to be effective in his current work, Perkins wrote. " We believe this is the best decision for Josh and his family at this time.  We will be praying for everyone involved."

Perkins is normally more vocal about protecting children, saying he is against same-sex marriage because children are better off with "with a mom and a dad in the home"