Paging Dr. Freud: These 9 antigay crusaders have an unshakable obsession with men’s buttholes 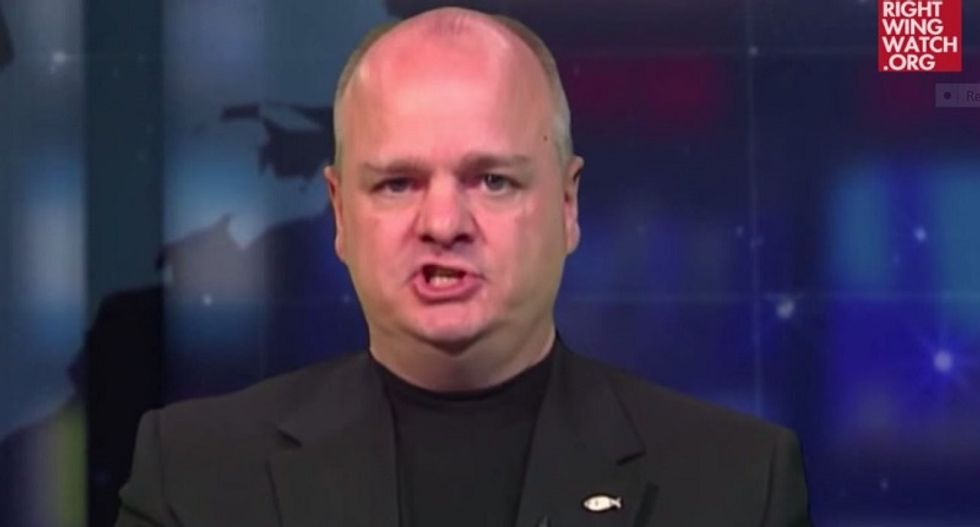 1. Rick Santorum. The erstwhile presidential candidate and Pennsylvania Republican is perhaps most famous for warning that LGBT relationships could open the door to "man-on-dog" relationships. Santorum doubled down on this bizarre conclusion, saying the Supreme Court's landmark ruling that legalizes same-sex marriage in all states proved him right.

"This ruling followed up with what I said would happen if the Supreme Court ruled the way it did, and the Supreme Court has followed their line of reasoning that I identified very early on that if consensual sexual activity is a constitutional right, then we have to – it leads logically, as you saw in the court’s opinion, that all things, that all the rights come with that," Santorum said recently, in defense of his original, 2003 comment.

2. Dr. Steven Hotze: Hotze is a Texas doctor who is not a board-certified endocrinologist but hawks "natural treatments" for endocrine-related problems like hypothyroidism at his clinic. Hotze is a key member of the virulently anti-gay political action group called REAL MARRIAGE: One Man/One Woman for Life. Hotze is apparently convinced that allowing same-sex couples to marry will mean gay sex will soon be forced on school children at school.

"[W]hat they’re going to do is promote homosexual men to mentoring and camping with your boys in the woods. And it will lead to child abuse… The children are in danger," the black-clad Klingenschmitt said before leading viewers in prayer. ""It's not about the sexual pleasure of the adults, it should be about protecting the innocent children."

In 2013, Klingenschmitt warned the Employment Nondiscrimination Act would result in "the militant gays demanding, "let us have sex in your house, or we will kick you out of your house," Right Wing Watch reported. He cited a discrimination lawsuit in Britain in which a bed and breakfast owner lost as proof.

"Do Christians no longer have control of their own home or business?" he ranted. "This is coming to the USA if we allow ENDA to become law."

4. Mike Heath: The former Ron Paul campaign director was apparently worried that LGBT rights activists would take their efforts to an interstellar level in a June blog post. In the post, titled "Rabid government: America forcing sodomy on the universe," he wrote:

"It won’t be enough to pervert the whole world with this evil anti-family worldview. Since the developed governments of the world aspire to colonizing planets we have to prepare for the export of sodomy to other worlds — to the entire universe!"

5. Rev. James David Manning: The New York pastor of Atlah World Missionary Church said in a YouTube message last year that images from NASA's Voyager spacecraft proved that homosexuality is wrong. After claiming that everything in the universe was "male or female," he launched into a rant about the rectum.

"There is no life that will come out of a rectum! You cannot produce life, it’s only death! There’s nothing in a rectum except waste, refuse and death! And without the true, authentic creation that God has put in order, all Sodomites would die! Because there’s nothing but death and refuse in the rectum! No life can come out of the rectum! The rectum is designed to get rid of death and waste! It’s designed for that one purpose, and the Sodomites are cheering on and praising the rectum!"

Manning had also spoken earlier this year about the prospect of drinking mens' semen -- like in cafe lattes.

6. Pastor Earl Carter: The Missouri pastor was caught on viral video praying to "cure" a man of homosexual "urges" and preached that gay men were "sissies" and that he hoped they would "bleed from their butts."

Here are some of Carter's comments from an interview he gave, in which he condones gay bashing:

"I'm going to tell you how I feel about Obama, how I feel about Oprah, how I feel about anybody that supports the Democratic Party. Sometimes they [are] immoral. They just don’t have any morals at all... And they would let anybody do whatever they want to do,” including letting a “man to have his penis in the butt of another man where the dung come out.”

He went on, “[God gave] you the butt so you can get rid of waste and bacteria. So, you sticking your penis in a cesspool," and went on to argue that God should smite gay men with periods, hot flashes and pregnancy.

"If you want to just think of how wrong homosexual so-called marriage is just ask yourself: how do two guys consummate their marriage? Yuck," he said, according to the Daily Beast.

8. Phil Robertson: The Duck Dynasty patriarch tumbled his family's television show and empire into waste when he revealed he was not only a homophobe when quoted in GQ Magazine with this fire-and-brimstone take, according to Queerty:

"Neither the adulterers, the idolaters, the male prostitutes, the homosexual offenders, the greedy, the drunkards, the slanderers, the swindlers—they won’t inherit the kingdom of God. Don’t deceive yourself. It’s not right."

He is also on the record last year putting quite a bit of thought into which is just why it is straight sex is better, as though he had to convince himself.

“It seems like, to me, a vagina — as a man — would be more desirable than a man’s anus. That’s just me. I’m just thinking: There’s more there! She’s got more to offer. I mean, come on, dudes! You know what I’m saying? But hey, sin: It’s not logical, my man. It’s just not logical.”

9. Bryan Fischer: The vociferous anti-gay activist flipped out last year when a Colorado civil rights commission ruled that a bakery had violated the rights of a gay couple by refusing to bake them a cake, Fischer called it a new era of Nazism, where Christians would be ruled by a fascist "gay mafia."

"Not only is [the baker] Phillips being reduced to slavery, he is now the victim of tyranny as well since he is being compelled by the government to violate his own conscience, Fischer ranted. "So meet our new overlords, the new owners of the American plantation, the gay mafia. All hail Big Gay, our new slave masters."

"This decision not to decide, this action not to act, this represents the de facto Roe v. Wade of sodomy-based marriage." It’s gonna be virtually impossible now to stop this press and this push for nationalizing — imposing — on every state in the Union marriage that is based on the infamous crime against nature."

He also discussed what he imagines to be the revulsion God feels when gay people have sex on his radio program, Right Wing Watch reported.

It seems clear he's put some thought into it, saying:

"When God sees it, it causes him to recoil. And when we think about the actual act of homosexuality, we have exactly the same reaction. Most people think about that, they don't want to think about that, they don't want to visualize it because it is disgusting. And if people aren't politically conditioned to accept it, their natural reaction is that's just not normal, that's just not natural, that's not what human beings were designed for, that's not what they were made for."

In 2013, Fischer refused to answer a yes-or-no question posed to him by radio host Alan Colmes, asking whether Fischer had ever had any gay impulses.