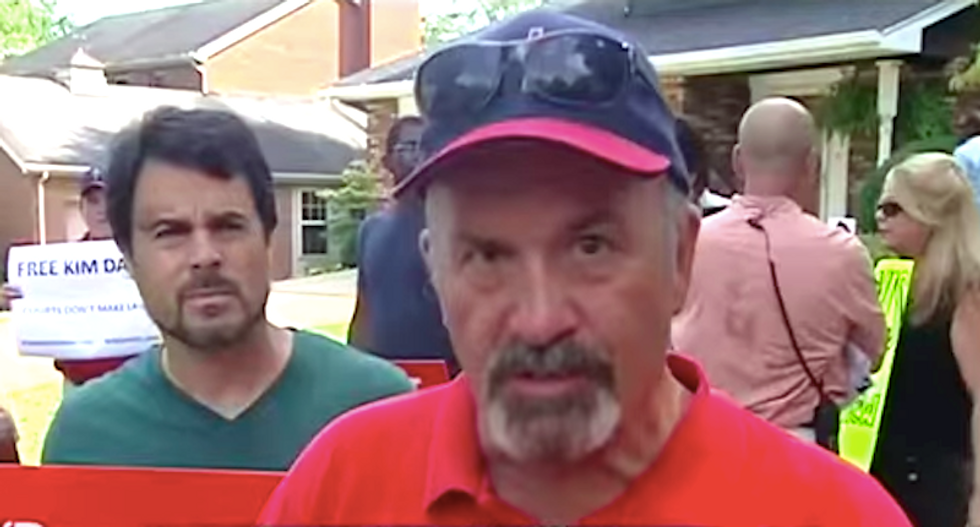 Dozens of anti-LGBT activists protested Monday outside the home of the federal judge who jailed Kim Davis, the Kentucky county clerk who was held in contempt of court for refusing to issue marriage licenses to same-sex couples.

"If you don't repent, we're going to ask that the sheriff in Grayson County arrest you for putting this precious little girl into jail," Benham added. "It’s wrong.”

Benham and his group have called on the Rowan County sheriff to arrest the federal judge when he arrives at work Thursday.

"Judge Bunning is in contempt of the Court of Almighty God and the constitutions of both Kentucky and the United States," said Benham, who has been convicted of stalking an abortion provider, in a statement that included the name of the judge's street.

Attorneys for Davis, the 49-year-old Rowan County clerk, filed an emergency motion in federal court asking Gov. Steve Beshear to exempt her from the requirement to issue marriage licenses.

Police and federal agents stood guard outside the federal judge's suburban home as protesters drove up in a truck festooned with pro-theocracy slogans and carrying signs that warned "the wages of sin is death -- remember 9/11."

"We're out here having church in front of the judge's home," said Cal Zastrow, the Michigan-based co-founder of the anti-abortion group Personhood USA.

The group arrived outside Bunning's home about 2 p.m. and handed out fliers accusing the judge of committing a "grievous crime" and asking supporters to pray for him to repent.

Curious neighbors left Labor Day cookouts to watch the protesters shout and sing Christian songs, and some told reporters they believed the protest had violated the judge's privacy and their own.

"It’s sad that someone that did their job and followed the law, that his whole street now is affected by these yahoos with their signs and everything," said Bobby McGovern, who was visiting a relative who lives near the judge.

McGovern and Steve Halstead, his partner of 38 years, were among the first same-sex couples to legally marry in South Carolina after the U.S. Supreme Court sided in November with an appeals court ruling to overturn the state's ban.

“My being married shouldn't affect you or anybody it doesn't affect," McGovern said. "It’s ridiculous.”

Bunning, the son of former U.S. Senator Jim Bunning and a George W. Bush appointee, has said that he was forced to jail Davis because he suspected her supporters would simply pay any fines he levied to compel her to follow multiple court orders and issue marriage licenses.

"The Kentucky constitution has never been altered in any way," said Benham, whose group disrupts same-sex weddings. "(Davis) is guilty of keeping the law, and the judge, David Bunning, has found her in contempt of his court. We are holding Judge Bunning in contempt of almighty God."

Kentucky's governor and attorney general directed all county clerks to issue marriage licenses to same-sex couples after the U.S. Supreme Court ruled that state bans on gay marriage were unconstitutional.

Davis' supporters, including Republican presidential candidate Mike Huckabee, don't understand why the judicial branch is authorized by the U.S. Constitution to overturn laws enacted by the legislative branch.

"Show us the law or set her free," said "Coach" Dave Daubenmire, an anti-abortion activist who gained fame for challenging his firing by an Ohio public high school for leading team prayers with his football players. "We believe Kim Davis is the one following the law and the judge is the one breaking the law."