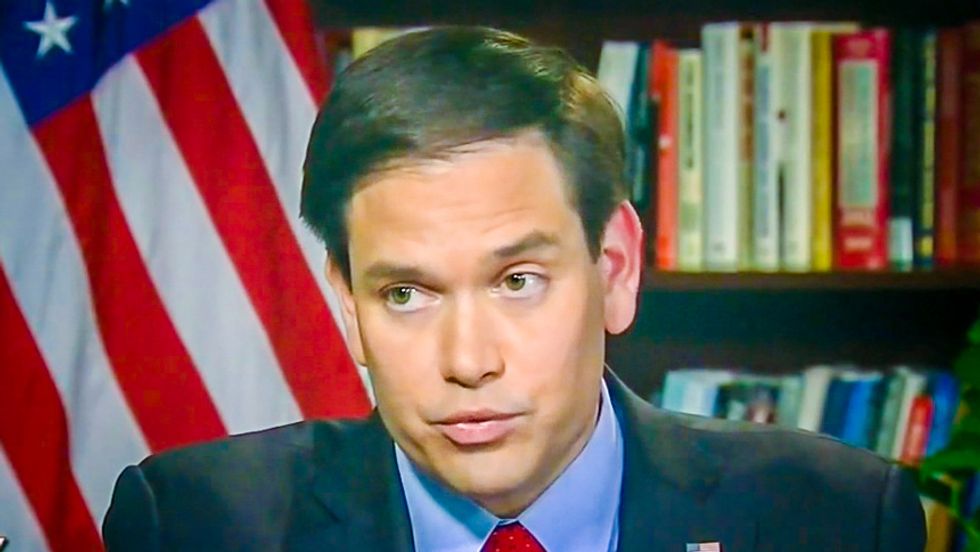 With a successful few debates under his belt and the republican establishment desperate for a replacement for Jeb Bush, it seems like Rubio is stacking up to be the new golden boy. Only, there is nothing golden about Marco Rubio. Here are 10 reasons he is the most dangerous candidate in the race for president:

1. Marco Rubio is the new lapdog of Wall Street

The last thing we need is another president who will let Wall Street run amok of our economy. Rubio voted four times to repeal Dodd-Frank and is against capping all those fees on credit cards that make banks so much cash. He opposes monitoring foreigners who deposit large sums of money into American banks. And if that isn't enough his most recent hedge fund billionaire backer, Paul Singer, is very well known for his money coming with strings attached. No one wants a president who is owned by someone.

2. Rubio thinks there should be a hold on all Syrian refugees after the Paris attacks

So incredibly short sighted. Families are fleeing the brutality of ISIS every day to any country that will have them. Denying them safety and hope does a great disservice to the world and to humanity. The attacks on Paris were horrible and we mourn the loss as a global community, but assuming they are all terrorists and turning our backs on them in their time of need isn't right and it isn't just. This is not who we should want America to be.

3. Rubio tried to gin up a class war between welders and philosophers

“Welders make more money than philosophers,” Rubio claimed during the GOP debate. “We need more welders than philosophers.” First of all, Rubio is showing his ignorance on the value of a 4-year Bachelors or Masters degree. Second, it would be nice if you're going to be president of the United States you represent both philosophers and welders. Both are great artists, one of craft and one of thought, and each has a different contribution to make. It isn't very mature to attempt to pit them against each other out of your own ignorance.

Until President Obama's autobiography became a best seller both he and his wife Michelle were in tremendous amounts of debt from their college and law school educations. Like many students, they did what they could plugging along. Rubio is no different in his own struggles to pay for his education, however, his debt extends far beyond the student loans he claims dominate his debt. Lavish spending to maintain a lifestyle to which the Senator cannot afford is hardly a quality we need in a leader. Did Rubio expect that his mountain of credit card debt for treasures including a $10,000 family vacation would somehow trickle down? The fact that he (allegedly) did it on a credit card that didn't belong to him makes it worse. How can you claim to be fiscally responsible when this is your financial reality?

As his hometown newspaper explained, Senator Rubio is being paid $174,000 of taxpayer money for a job that he is not doing. This year, Rubio has missed nearly one-third of his Senate votes. Even former Governor Jeb Bush blasted Rubio during the debate, for which Rubio had no excuse. How can you hold strong opinions on issues and not even show up for the votes or the hearings?

6. Rubio has a very low opinion of women's intelligence and thinks we are greedy monsters.

"You’ve created an incentive for people not just to look forward to having more abortions, but being able to sell that fetal tissue for purposes—these centers—for purposes of making a profit off it..." Rubio said.

The contempt and disgust that Rubio must hold women to think that they find pleasure in having to make such a personal decision. Women deserve much more respect than that. As if that isn't enough, Rubio plans to extend his lack of respect and privacy for women at home to countries around the globe. He called the historic Roe v. Wade decision “historically and egregiously flawed” and went on to say that he would fight to restrict women’s right to choose “at home and around the world.”

The old fable from Aesop is true: You are known by the company you keep. A Texas real estate tycoon enjoys spending his fortune on Hitler and Nazi memorabilia. While we all find it in poor taste, indeed disgusting, it is his right to give money for that which he considers "artwork." But the fact that Rubio held a fundraiser there on the sacred Jewish holiday Yom Kippur of all days is more telling of him than it is of his Texas friend. Shameful.

8. Rubio believes same-sex marriage is "a real and present danger" to the survival of Christianity

If an entire religion made up of 2.2 billion people can be shaken by two people joining their lives through a contract for legal and tax purposes, then the faith was in trouble long before that or, conversely, he's making it up.

“If you think about it, we are at the water’s edge of the argument that mainstream Christian teaching is hate speech,” Rubio explained to Christian Broadcast News's David Brody.

If you are preaching hate speech, you are neither mainstream, nor Christian, and therein lies the religious right's predicament.

9. Rubio thinks Iraq was not a mistake

You've heard the saying that those who do not learn from history are doomed to repeat it? Under a Rubio administration, we could very well end up in another Iraq-like war. There is no reason to go into a country on flawed intelligence simply because your advisers have to settle an old score. There are plenty of young leaders who hold great knowledge and wisdom, Rubio is not one.

10. We are not the world's police, but Rubio thinks we should intervene more

I said in the assertion above that under a Rubio administration we could very easily end up in another Iraq-like war because he refuses to learn from the mistakes. The likelihood is even higher knowing that Rubio thinks the U.S. should be involved in more conflicts. An entire generation is now smaller and carries greater wounds because of the mistakes from which Rubio refuses to learn. The last thing we need is a leader in the White House who can't figure it out.

Only a year out and already we have a number of examples that should concern any American about a Rubio presidency. There will likely be more to come.