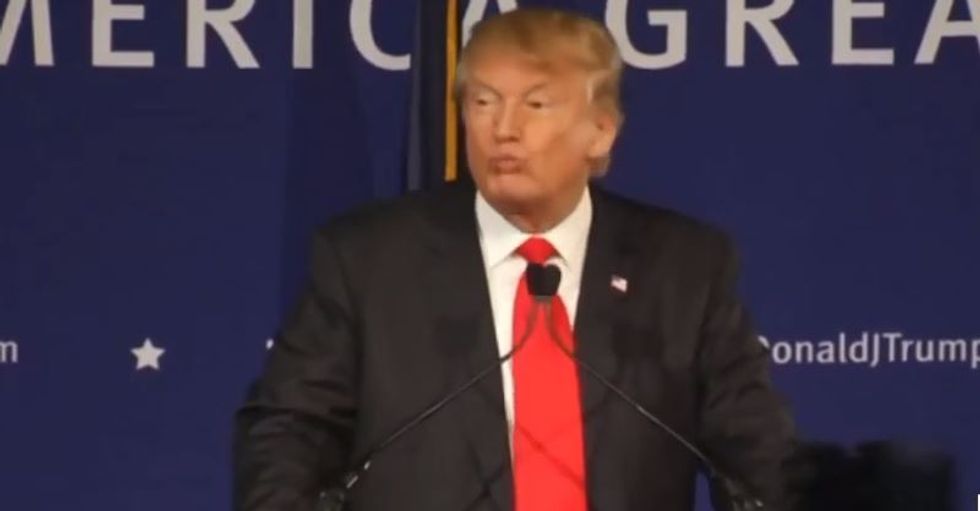 A protester at a South Carolina rally for Donald Trump was charged with assault at the request of the mother of a Trump supporter.

Percy Johnson Smith was among people standing in a cordoned-off area designated for protesters on Monday night when a group broke off and ran through the crowd of rally attendees, ABC4 reports. The enthusiasm of fellow protesters prompted  Smith to make another run for it, and when he did, he bumped into a Trump supporter "and tried to antagonize him by bumping [the victim] with his chest," the report states.

Smith was on his way to a nearby hospital to have his blood sugar level checked when police informed him that the mother of the Trump supporter he bumped wanted him charged with a crime. Smith was charged with third-degree assault. ABC4 reports Smith knew he would be arrested beforehand and had given his belongings to friends.

Video from the rally shows Trump's speech being interrupted several times by protesters and supporters raucously shouting them down with chants of "Trump! Trump! Trump!" and "USA! USA! USA!"

"I don't want the person to be hurt but I will tell you, security is very weak," Trump said at one point. "I can't believe these security people. One person and we've wasted five minutes."

Trump's rallies have a habit of becoming violent, with protesters being dragged and beaten by raucous Trump supporters. Violence perpetrated by Trump supporters in his name started in August, when two brothers who said they wanted to "make America great again" beat and urinated on a homeless man in Boston.

Trump perhaps set the tone when he failed to condemn the actions.

“I will say that people who are following me are very passionate,” he remarked. “They love this country and they want this country to be great again. They are passionate.”

Watch video from Trump's rally, as posted to YouTube, here: