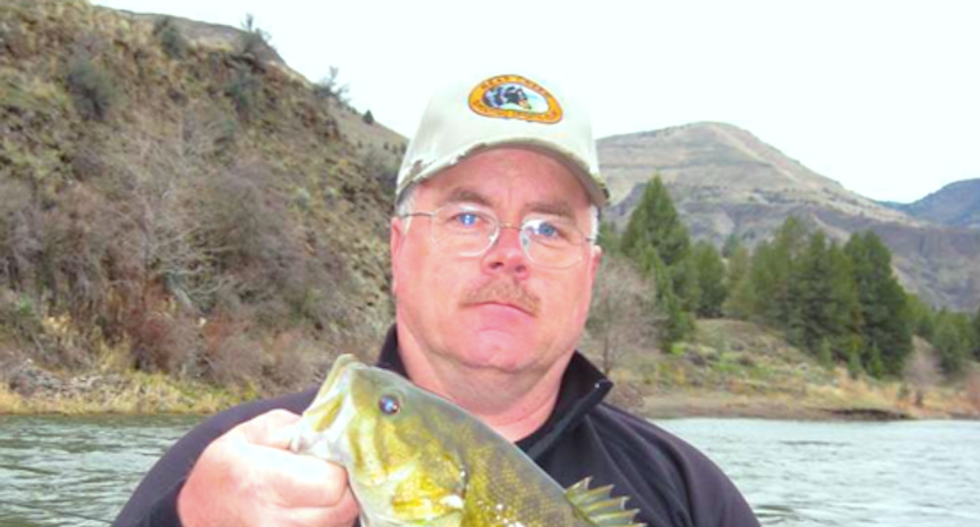 Armed militants who are occupying an Oregon wildlife refuge are trying to convince residents of a neighboring county to help them shake off federal land ownership and possibly kidnap elected officials.

The heavily armed group, who are attempting to take over the elected government in Harney County, apparently have the backing of nearby Grant County's sheriff -- who is a member of an anti-government law enforcement group.

Sheriff Glenn Palmer has told The Oregonian that "the government is going to have to concede something" to end the three-week-old occupation of the Malheur National Wildlife Preserve.

He suggested they start by releasing Dwight and Steven Hammond, a father-son ranching duo serving prison terms for arson on public land, and then sending home the FBI, which is directing the law enforcement response to the occupation.

The militants attempted to make inroads in Grant County on Jan. 12, when Palmer said he was unwittingly invited to a lunch meeting with Ryan Payne and Jon Ritzheimer, two military veterans helping to lead the occupation, and about 10 local residents.

Ritzheimer said Palmer -- who was named "Constitutional Sheriff of the Year" by an anti-government group in 2011 -- asked him and Payne to autograph his pocket Constitution, an annotated copy of the founding document conspicuously carried by all the militants.

Palmer declined their invitation to join the occupation, saying he would not undermine the authority of Harney County Sheriff David Ward, but he also refused to help the county's top administrative official "shame and humiliate them into giving up."

"We shared similar ideas about where we're at," Payne said. "The sheriff has a practical plan for helping unravel the federal government."

These grand jury proceedings aren't legally binding, but they have resulted in the kidnappings and beatings of government officials in previous cases, and jury members have filed fraudulent liens against the officials' homes and stalked or harassed them for years afterward.

"When this jury reaches its verdict, the sentence is often psychological," said reporter John Sepulvado, of Oregon Public Broadcasting.

Sepulvado and other reporters covering the occupation have been warned repeatedly that it's a felony to ask questions about the common law grand jury or its proceedings.

Those extralegal grand juries typically indict on only one charge: treason -- which carries a punishment of death.

The militants plan to hold a public meeting Tuesday evening at the John Day Senior Center, in Grant County, where they will urge residents to form a Committee of Safety -- another extralegal maneuver that would essentially form a shadow government in anticipation of the elected government's failure or removal.

Bundy helped set up a Committee of Safety on Dec. 15 in Harney County, about two weeks before the militants took over the bird sanctuary.

The militants could find a receptive audience in Grant County, where the sheriff frequently speaks out against federal authority and serves an advisory role with the Constitutional Sheriffs and Peace Officers Association -- whose founder, Richard Mack, urges like-minded officials to overthrow county governments one by one to pursue a right-wing agenda.

The Grant County meeting was organized by Tad Houpt, a logger whose complaints about federal land management have been promoted by the Koch-backed American Lands Council.

It's not clear what plans the militants have for Grant County, if enough residents agree to go along with Bundy's plot.

But a public meeting organized by Harney County for Monday was canceled in the face of threats to block access to a senior center there.

A New York woman was found murdered in her home after police were alerted to a "foul order" coming from her apartment.

Tamara Graham was found dead on the floor of her living room in her Brooklyn apartment on the eighth floor on Dec. 15. It's unknown how long she'd been dead, the New York Post reported.

Justice Arthur Engoron asked why attorneys for the 16 defendants in the $250 million lawsuit against the Trump Organization had filed thousands of pages repeating the same defenses over and over, including the argument that the company doesn't legally exist and instead serves as shorthand for numerous other corporate entities, reported Newsweek.