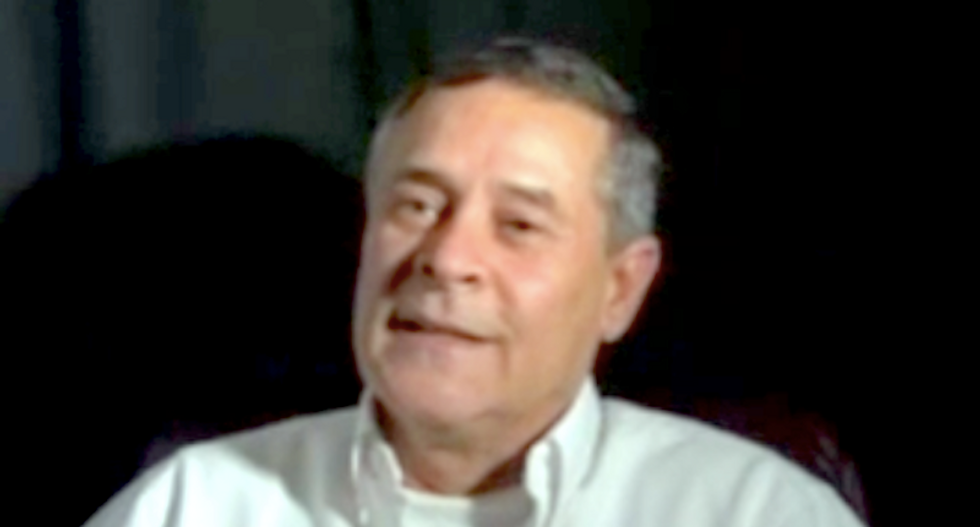 A phony judge may have impersonated a police officer to help a pair of Oregon militants take their children away from a relative and bring them to an armed showdown with federal authorities.

Joaquin Mariano DeMoreta-Folch, a Tea Party activist and self-appointed "judge" from Florida, has been chosen by the militants to oversee an extralegal "common law grand jury" to investigate and intimidate elected officials standing in the way of their plan to take over Harney County.

DeMoreta-Folch is not actually a judge -- and he's not even an attorney.

However, the wife of one of the imprisoned ranchers who helped draw the militants to southeastern Oregon agreed to sign a “Demand to Amend With No Delay" that DeMoreta-Folch promised her would help clear, and eventually free, her husband and son from prison.

"“That’s why I signed it,” Susie Hammond told Oregon Public Broadcasting. “That is my name, and I think he’s my new attorney -- do you know his phone number?”

DeMoreta-Folch has a history of filing frivolous, incoherent lawsuits against political foes -- a tactic common among so-called "sovereign citizens."

His tactics are considered too extreme for the National Liberty Alliance -- which encourages others to claim "sovereignty" for themselves through extralegal means.

“I don’t want to say that he’s crazy, but he’s too extreme for us,” said NLA spokesman Robert Bristow.

DeMoreta-Folch also apparently went to Arizona to help the wife of one of the most prominent Bundy militants retrieve two school-age children from a relative during a family and legal dispute about the girls' care.

The wife has apparently been staying with her husband in Harney County since last month, when the militants arrived and began trying to drum up local support for their plans to shake off federal control of public lands.

The Raw Story is not naming the couple to protect the identity of the girls, who are ages 9 and 8. OPB reported the girls had been spotted at the Malheur National Wildlife Refuge, but they are not typically allowed to roam outside.

Social media posts suggest that relatives began to question the couple about the length of their out-of-state stay, which began before Christmas, and the wife returned to Arizona to pick up the girls.

Rodger Dowdell, a Tea Party activist from Florida, explained during a "sovereign citizens" conference call posted online that the relative had called Child Protective Services, which threatened to take custody of the children.

The couple asked DeMoreta-Folch to help them retrieve the girls, and they also sent two unidentified militants along at his request to assist in the operation.

DeMoreta-Folch and the wife drove up to 16 hours to Arizona and waited at least two hours for the militants to show up, but Dowdell said they never did.

The pair went to the relative's house, where DeMoreta-Folch -- who Dowdell said put on a phony law enforcement ID badge before leaving -- argued that the relative had no authority under common law to hand over the girls to CPS, and the man threatened to call the police.

Bruce Doucette, a Colorado man assisting the militants, said he called the relative, identified himself as a “United States at Superior Court Judge" and threatened "to bring him up on charges to the grand jury of kidnapping" if he did not turn over the girls to their mother and DeMoreta-Folch.

Dowdell said DeMoreta-Folch also threatened to bring the relative up on common law grand jury charges if he turned the girls over to CPS workers.

The Florida activist said the pair jumped into a car with the girls and sped away, and they drove past a police car with its sirens flashing on its way to the relative's house.

"The key point there, relative to the question of enforcement and Joaquin's ability to get the job done, was he has a very professional-looking ID card that he hangs around his neck and it identifies him with a picture as the common law jury administrative investigator, and when the gentleman said, 'I need to talk to an officer,' he said, 'I am an officer -- you know, what do you want to know?'" Dowdell said.

Arizona law outlines class 6 felony charges for those who pretend to be a peace officer and engages in any conduct intended to persuade another person to submit to their phony authority.

According to the statute, it does not matter if the law enforcement agency a person claims to represent exists or not.

The charges can be upgraded to a class 4 felony if the deception occurred during the commission of a variety of other crimes, such as murder, theft or kidnapping.

Watch this video of DeMoreta-Folch explaining his views: