Seth Meyers just crushed Ted Cruz for his web of lies: ‘He’ll do or say anything to get elected’ 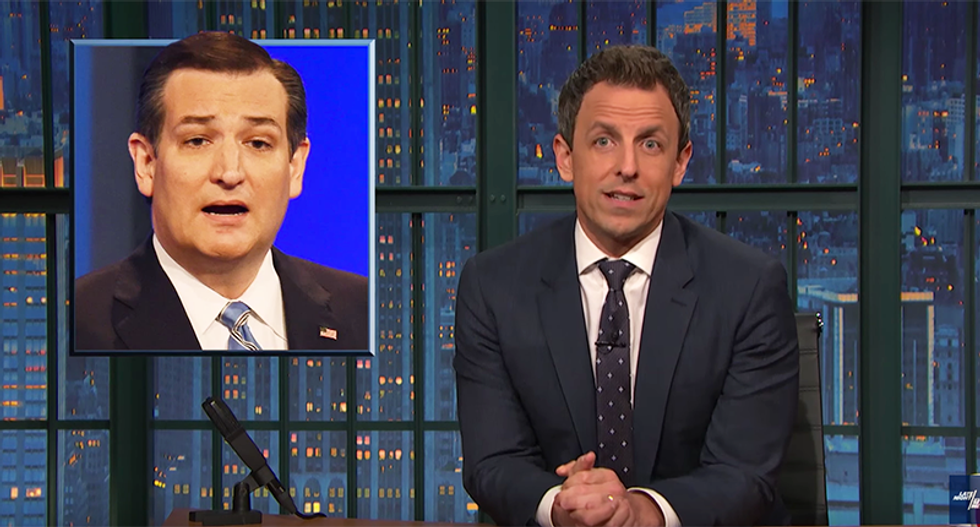 This week, Ted Cruz fired his communications director for putting out a video claiming that Marco Rubio had made a disparaging comment about the Bible to Cruz's father and staffer. But this is just one of several in a web of Cruz lies, Seth Meyers outlined on Tuesday's "Late Night."

Cruz came in third this past weekend in South Carolina, even losing evangelical voters to Donald Trump, so he's already starting out the week in a bad mood. Then the video controversy happened and Cruz quickly sacked the staffer who then went on Fox News to try and explain himself. He cited the Daily Pennsylvanian as his source for the transcript, claiming that the college paper is standing by the transcript.

"The bigger problem for Cruz: This scandal is just the latest in a series of incidents that have given his campaign a reputation for having low ethical standards," Meyers explained. "As you may remember, Cruz first got that reputation after his campaign spread false information about Ben Carson in Iowa to steal some of Carson's voters."

Even weeks later, this disgrace continues to follow Cruz around. He even requested a meeting with Carson to try and smooth things over. The only way they could get a private meeting, however, is to have it in a storage closet. "That's right, Cruz and Carson met inside of a storage closet. A moment I'm sure both of them, as anti-gay rights advocates immediately regretted when they realized that eventually they would have to come out of the closet, together," Meyers said. According to reports, Secret Service agents stood outside the door confirming the meeting saying, "yeah, they're in the closet." "Because you know those Secret Service guys were like, 'F*ck this! I use to be a Marine! Now I'm waiting for these two dummies to finish playing Seven Minutes in Heaven?'"

Unfortunately for Cruz, these aren't just isolated incidents. It's "a criticism even his fellow Republicans have leveled at him: He'll do or say anything to get elected," Meyers said. For example, just before the Iowa caucus, Cruz came out against the ban on fireworks sales. Why would a U.S. Senator weigh in on such a local issue? His pollsters found 60 votes that could be swayed by the issue, with the voters claiming, "you can pry my bottle rocket from my cold, dead, three-fingered hand," he joked.

But if someone really cares about fireworks that much, they're going to vote for a Roman candle like Donald Trump anyway. "This guy's a human firework, right here."