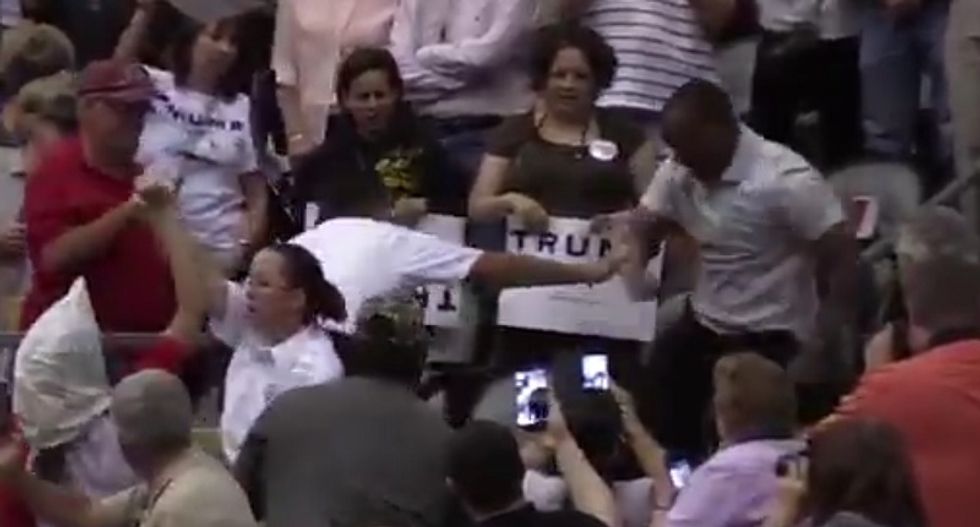 GOP front-runner Donald Trump's campaign rallies have been increasingly under scrutiny for violence. His rallies in Arizona on Saturday were no different.

NBC News reporter Frank Thorp caught video of a man swinging at a protester at Trump's Tucson, Arizona rally on Saturday and appearing to kick and stomp while the protester was on the ground.

The video shows the man taking swings at a person who is apparently down on the ground as security and police rush over to the area. The man then continues striking the person with his feet but is stopped when police handcuff him.

The video does not show what prompted the violence.

Video taken at the same rally reportedly show's Trump's campaign manager, Corey Lewandowski, roughly grabbing the collar of a protester and yanking him. Lewandowski himself was accused of violence for grabbing and yanking a female reporter for conservative website Breitbart earlier this week.

Authorities are already investigating incidents of violence at previous rallies, including arresting and charging a Trump supporter in North Carolina for sucker-punching a protester. North Carolina police also investigated Trump for inciting a riot, but have declined to charge him.

Trump's Arizona rallies were accompanied by vociferous protests nearby and also in New York City. This month he was forced to cancel a rally in Chicago over safety concerns.