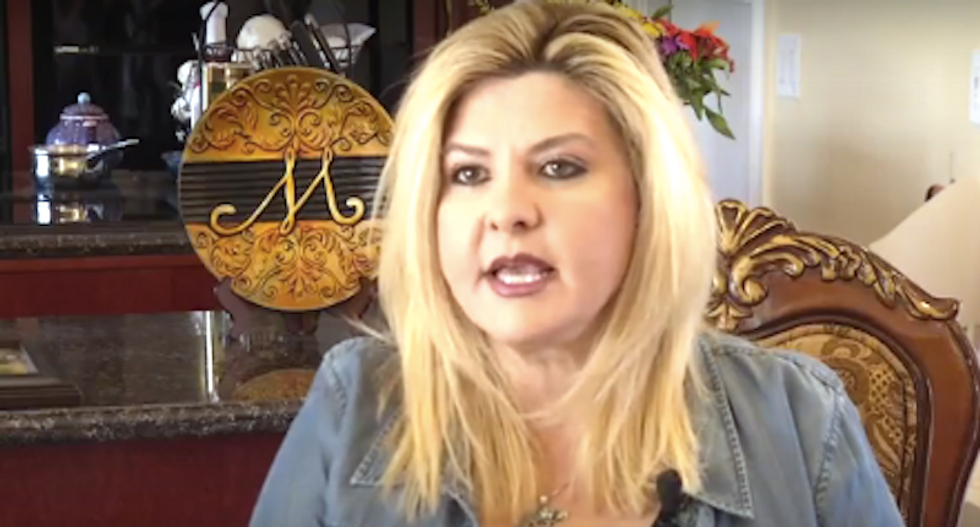 A gun-toting Nevada Republican doubled down on her comments about pointing guns at law enforcement officers.

Assemblywoman Michele Fiore found herself last week at the center of a controversy, where she often lands, after claiming the Second Amendment granted Americans the right to aim firearms at a “duly authorized law enforcement officer who is just out there doing his job," in response to a local TV reporter's question.

“I would never ever point my firearm at anyone, including an officer of the law, unless they pointed their firearm at me,” Fiore said in that interview, which gained national attention after it was reported by Think Progress.

She went on to say that she would fire her weapon at law enforcement officers in self-defense, if she believed her life was in danger.

“Once you point your firearm at me, I’m sorry, then it becomes self-defense," Fiore said. "Whether you’re a stranger, a bad guy, or an officer, and you point your gun at me and you’re gonna shoot me and I have to decide whether it’s my life or your life, I choose my life.”

Fiore, who is an outspoken supporter of scofflaw rancher Cliven Bundy and played an active role in the occupation of the Malheur National Wildlife Reserve in Oregon, gave another local TV interview Monday to fire back at her critics.

"Police in this state know me and know me well, so for them to ever just jump off the bridge and go, 'Oh, she's anti-cop' -- like, really?" Fiore told KTNV-TV. "I'm sorry, but they better check themselves before they wreck themselves."

The state lawmaker, who is running for the U.S. Congress, said she did not mean to suggest she would point a gun at local police officers -- only federal agents, whose authority she doesn't recognize.

"The more and more I learn about the (Bureau of Land Management), they're not federal officers, but we were calling them officers, we were calling them officers of the law -- and they are not," Fiore said. "What they are, what the BLM is, is they are wannabe cops, untrained and rogue agents. The BLM is nothing more than a bureaucratic agency of terrorism that terrorizes Americans, especially ranchers. They literally have waged a war on all of our rurals."

The BLM fields about 200 uniformed law enforcement rangers and 70 criminal investigators to enforce laws on federally owned land, which is overseen by the U.S. Department of Interior that was established by an 1849 act of the U.S. Congress.

Fiore is an active and outspoken member of the Coalition of Western States, which is working to roll back federal ownership of public lands for private use and helped coordinate the Malheur occupation.

She repeated a number of false assertions about the BLM's role in the Bundy ranch standoff.

In fact, Richard Mack, a right-wing former law enforcement officer who helped coordinate the standoff, suggested using woman and children as human shields, and Fiore's fellow GOP assemblywoman, Shelly Shelton, was photographed holding a rifle as her husband cradles their 1-week-old son at the Bunkerville standoff.

Heavily armed militia members who flocked to the standoff set up sniper positions against BLM agents -- who gave up on efforts to round up Bundy's cattle over concerns about public safety.

"We are talking about cows eating brush, to then all of a sudden to have a BLM rogue, moronic individual come into our state and try to govern Nevadans and Americans across America by gunpoint," Fiore said. "I'm sorry, that is not going to work."

The reporter, David Schuman, asked the assemblywoman if she would point a firearm at federal agents under those circumstances.

"I always have a gun," Fiore said. "So if I have a rogue agent that literally has a history of death in his past ... and if that man ever pointed a gun at me, I'd point right back, because his intentions are evil."

Fiore admits she has a Las Vegas police officer 'lover'

She laughed at the idea that "real law enforcement" from Metro police would ever point their guns at her, saying that she had an "unofficial romantic friend" on the force.

"Metro is not going to be pointing a gun at me, period," Fiore said. "You know, if any of our Metro police officers are pointing anything at me, it definitely isn't their gun."

She smacked her lips suggestively but declined to offer specifics about this "romantic friend."

"I'm a public figure, and I don't think exposing a lover is the fight thing to do," Fiore said.

She complained that Think Progress had not transcribed the entire half-hour interview but instead had highlighter only the most newsworthy statements.

"When you have a soundbite like that and you don't listen to the 30-minute interview, and you listen to that soundbite, it sounds bad," Fiore said.

The assemblywoman said Las Vegas police -- which lost two officers to an ambush by a couple who had participated in the Bundy ranch standoff -- had endorsed her in each of the last two elections.