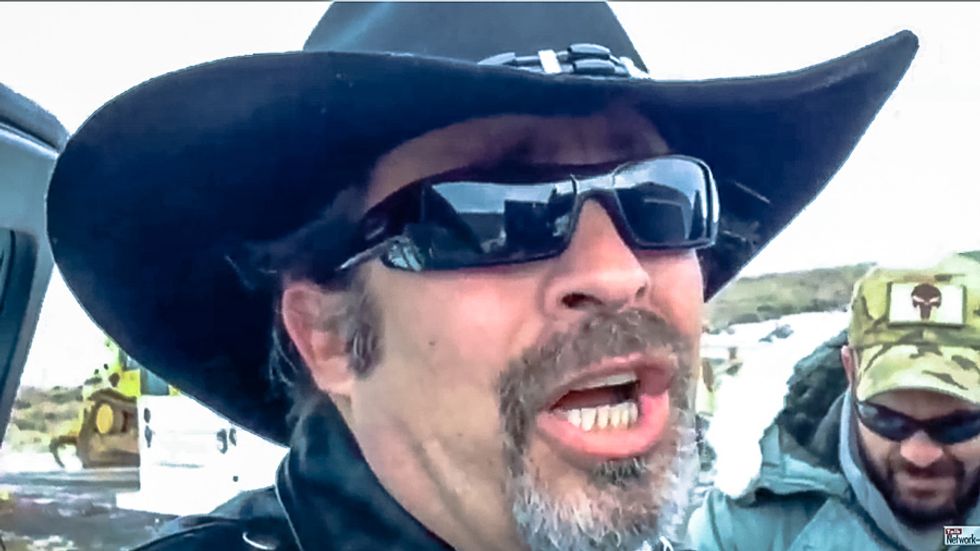 A week before Christmas, a small-town Ohio police chief spotted an SUV going 20 mph below the speed limit and stopped the motorist on suspicion of texting while driving.

The chief glimpsed a loaded 9 mm Smith and Wesson handgun in a bag between the passenger's feet -- but the routine stop became tense after he noticed the driver's name on a national terrorist watch list.

Newtown police later said the driver, a right-wing Internet broadcaster named Pete Santilli, was not actually listed in terror database -- but the incident sheds some light on conservative reluctance to ban suspected terrorists and the mentally ill from owning firearms.

Put simply: An awful lot of right-wing conservatives believe their Second Amendment rights kick in when their First Amendment talents fail -- and they stoke their fears of government overreach with paranoid conspiracy theories that sometimes resemble mental illness.

The 51-year-old Santilli, who became radicalized by 9/11 "truther" conspiracy theories and hosted militia members and other right-wing extremists on his “Off the Hook in the Morning” program, fits those categories.

Santilli, who had recently moved from California to join his girlfriend in the Cincinnati area, was charged during the traffic stop with illegally carrying a concealed weapon without a permit, but the case was quickly and inexplicably dropped.

But just 15 days later, Santilli showed up in Burns, Oregon, where he filmed a protest that turned into a monthlong occupation of a national wildlife preserve by many of the same armed anti-government militants who had engaged federal agents in a 2014 showdown at the Bundy ranch in Nevada.

Joking aside, a serious debate could be had about whether the militants led by Ammon Bundy and his brother, Ryan, were terrorists.

None of the militants who were arrested in connection with the armed occupation, including Santilli, have been hit with any terrorism-related charges -- but rather some combination of charges such as conspiracy to impede federal officers, firearm possession at a federal facility, carry of a firearm in relation to a violent crime, and depredation of government property.

But the government had been watching many of the militants since the Bundy ranch standoff, and some of them had attracted attention from law enforcement by threatening lawmakers, government authorities and minority groups before taking over federal land to protest federal ownership of public lands.

It's not clear whether any of the militants -- except possibly Santilli, who was investigated by the Secret Service in 2013 after saying he wanted to shoot Hillary Clinton "right in the vagina" -- were ever placed on the terrorist watch list.

The database, which identifies about 10,000 Americans among an estimated 700,000 names, is necessarily secret, for both privacy and national security reasons -- and its existence is controversial to both liberals and conservatives.

Republicans have done the bidding of the National Rifle Association and blocked legislation that would prohibit anyone named on the terrorist watch list from buying or owning guns.

Some conservatives have softened their opposition after a 29-year-old who had been named on the list gunned down 49 people and wounded 53 more at an Orlando gay nightclub.

There are plenty of legitimate concerns about the database and the process for getting names removed -- but there's an underlying assumption the terrorist gun ban violates the Second Amendment because conservatives would be unfairly targeted.

And a lot of conservatives believe the Second Amendment gives them a right to use firearms as political expression.

"I’d much rather have an election where we solve this matter at the ballot box than have to resort to the bullet box," said gun lobbyist Larry Pratt.

"Failing all other appeals to peaceful means ... the founders’ solution to such tyranny is still available, still potent, and still waiting, for when democracy turns to tyranny, the armed citizenry still gets to vote,” said Mike Vanderboegh, the co-founder of the "III Percenters" gun militia.

Even Republican lawmakers have argued that the Second Amendment grants them the right to point guns at law enforcement officers.

“Once you point your firearm at me, I’m sorry, then it becomes self-defense,” said Michelle Fiore, a Nevada assemblywoman who backed the Bundy militants in Oregon and at their family's ranch. “Whether you’re a stranger, a bad guy, or an officer, and you point your gun at me and you’re gonna shoot me and I have to decide whether it’s my life or your life, I choose my life.”

Those statements -- which could conceivably attract the interest of law enforcement or potentially land a person, unfairly or otherwise, on a terrorist watch list -- go a long way toward explaining why some right-wing conservatives might oppose a gun ban for suspected terrorists.

Opposition to the ban runs strong among hardcore gun-rights supporters -- who sometimes warn darkly that Americans could be identified as enemies of the state simply by voting Republican or attending church.

They also warn that holding certain conservative views could lead to a mental illness diagnosis, which might disqualify from owning firearms they'll need to fight government tyranny.

The psychiatric profession doesn't consider fanaticism a mental disorder -- but there's still some confusion because no clear boundary separates religious and political extremism from mental illness.

"One man's cherished belief is another man's delusion," explained Dr. Allen Frances, former chair of the DSM-IV Task Force and a professor emeritus at Duke University School of Medicine.

Those conspiracy theories have moved from the political fringes and the bumper sticker rack at gun shops, where they've existed in some form for decades, to the conservative mainstream during the Obama administration.

Last year's Jade Helm 15 hysteria, which turned a military training exercise into wild-eyed tales of foreign troops disarming and rounding up registered Republicans and herding them into FEMA camps housed in disused Walmart stores, is just one example.

Those fears are stoked by talk radio hosts such as Alex Jones, who has hosted the presumptive GOP presidential nominee, Donald Trump -- who himself floats conspiracy theories about President Barack Obama that feed back into the paranoid mindset that causes right-wing conservatives to cling even more tightly to their guns.

Trump's presidential campaign was linked to both the Bundy ranch and the Oregon occupation through Jerry DeLemus, who served as the New Hampshire co-chair of the Veterans for Trump organization but is now jailed for his role in both armed anti-government protests.

Which brings us back to Santilli, who remains jailed for his role in the Bundy ranch standoff and the Malheur occupation.

For all his overheated rhetoric about jackboot thugs seizing guns on flimsy pretenses, he was free to travel to Oregon to participate in an armed uprising against the federal government just two weeks after his arrest on gun charges.

The arresting officer pointed a gun at him after mistaking him for a terrorist -- but Santilli said he was nice about it.

“He was extremely professional, constitutional — he was very, very courteous when he pulled me over,” Santilli said.

Right-wing conservatives like to imagine their trusty gun will protect them from a tyrannical threat that doesn't really exist -- and the firearms industry happily indulges them with grim fantasies.

But the reality is, too many Americans are killed by someone who never should have owned a gun in the first place.