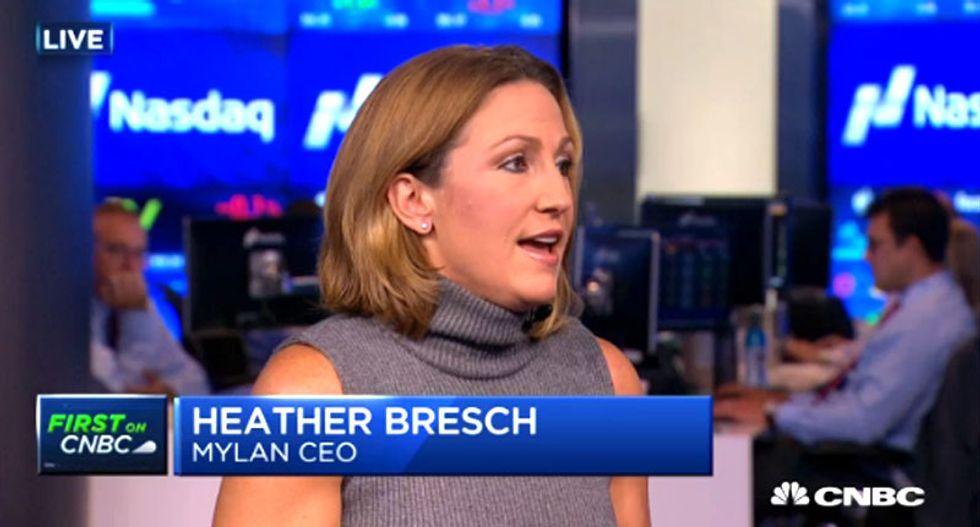 Mylan Pharmaceuticals CEO Heather Bresch is desperately trying to control the public relations disaster created by her company's decision to jack up the price of the life-saving EpiPen drug by 450 percent over the past 12 years.

In an interview with CNBC on Thursday, Bresch insisted that "no one is more frustrated than I am" about the price increase, which she said was necessary to cover all the marketing and distribution costs that are needed to make the drug more widely available.

"We're manufacturing the product, distributing the product, enhancing the product, investing," she explained. "When we took over this product eight years ago, there was very, very little awareness. We have doubled the lives of patients who are carrying an EpiPen. We have passed legislation in 48 states to allow undesignated EpiPens to be in schools."

Of course, none of this addresses the criticism that raising prices by such high amounts ensures that fewer children will have access to the drugs because their parents won't be able to afford them.

CNBC interviewer Brian Sullivan also pointed out that the American Medical Association has said that EpiPens are the same product that they were in 2009, and thus nothing justifies such massive price hikes.

"Everybody should be frustrated," she replied without actually addressing this criticism. "I am hoping this is an inflection point for this country."

When asked how she could justify increasing her own compensation -- which has risen from $2.5 million in 2007 to $18.9 million in 2015 -- even as parents have to pay significantly more for their children's life-saving drugs, Bresch again completely dodged the question.

"I understand better than anyone that facts are inconvenient to headlines," she said. "I want to change this conversation. First of all, so everyone has access. Let's talk about, the last eight years, what we've done to make sure the people who need it have it. When we passed legislation in 48 states to ensure that schools can have EpiPens, we have given out 700,000 free EpiPens... They need to be everywhere, because when you need them, seconds count."

Sullivan pointed out that it appears that Mylan is just trying to legislate in a new market rather than making sure its drugs are affordable.

"I'm legislating in the access to EpiPens!" she replied.

Check out the interview in the videos below.