Ana Navarro nails Trump: He needs 'a minimum level of fitness' to attack a women's weight 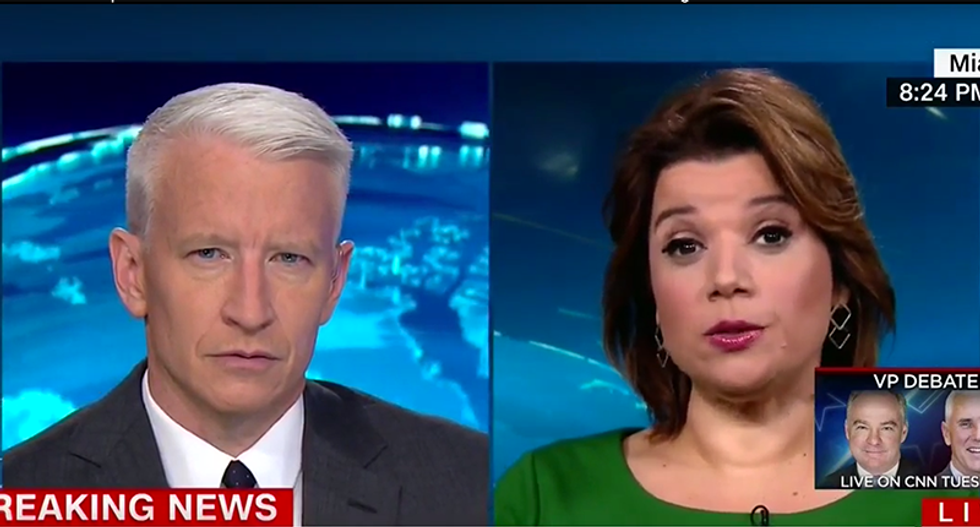 Republican presidential candidate Donald Trump is drawing criticism this week from women after doubling down on fat shaming former Miss Universe Alicia Machado. His campaign is struggling to both justify his comments while also attacking Clinton claiming she's anti-women.

"I think that Trump has lost sight of the fact that the average American woman in America is a size 12," said anti-Trump Republican and CNN commentator Ana Navarro. "They look a lot more like me than they look like Melania Trump. And when he's calling people fat pig, when he's fat-shaming people, he's fat-shaming a majority of Americans it. m

She went on to say that mocking a hypothetical 400-pound hacker makes absolutely no sense in a presidential debate. "And let me point out that I just think when you have a Donald Trump or a Newt Gingrich fat-shaming people in public, I don't know, man. But I think you got to have a minimum level of fitness yourself if you are going to go out and have the gal to do it to anybody."

CNN host Anderson Cooper found it absurd that Trump was trying to claim the press conference where he forced Machado to work out on camera was a celebration of physical fitness.

"If it was, he would have worn some sweat suits and worked out with her," Cooper said. "He was standing there watching her work out and in very strange cut-away shots and giving away interviews to Access Hollywood, saying 'this one likes to eat.'"

Navarro argued that Trump's attacks on Machado and other women are hypocritical since he's obese himself.

"He should admit that was the wrong thing to do and he should have moved on," she began. "He's got a gap with women. He's got a gap with Hispanics. If you think trying to trash this woman twenty years later is going to help him any? It doesn't. We all remember when she was exhibited in workout clothes and being told that she was an eating machine. "It is not helpful."

Trump surrogate Kayleigh McEnany tried to insist that the press conference was not mean spirited because it focused on physical fitness, but the other women disagreed.

Commentator Christine Quinn agreed, saying that Trump was far from the "Mother Teresa of women," the way his campaign is attempting to claim he is. "Whether he did or didn't do anything of those nice things, I don't know," she began. "But he has said this woman was 'an eating machine.' It wasn't physical fitness. He didn't check to see if she could do a four-minute mile. He made her exercise in front of the press and said she couldn't stop eating and watched her. Whether you do one good thing, it doesn't take away that scene which is reprehensible."