Rep. John Lewis backs Kaepernick: ‘You have a right to protest for what is right’ 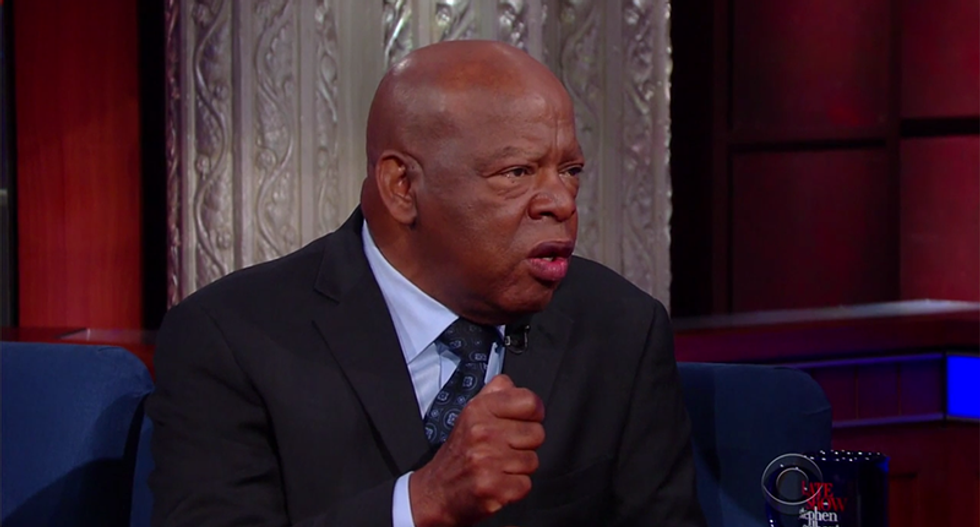 Civil rights legend Rep. John Lewis (D-GA) told Stephen Colbert on Wednesday night's "Late Show" that sometimes one has to find a way to "get in the way" and to "get in trouble — good trouble, necessary trouble."

The Georgia Congressman received a large applause from the Colbert audience when the host mentioned that he was the one who lead the sit-in on the House floor this past June.

"When I was growing up," Lewis began his explanation. "In rural Alabama as a young child and would visit places like Troy and Montgomery and I would see those signs that said 'White Men,' 'Colored Men,' 'White Women,' 'Colored Women,' 'White Waiting,' Colored Waiting,' I would ask my mother, my father, my grandparents, my great-grandparents they would say, 'That's the way it is. Don't get in the way. Don't get in trouble.' But I heard of Rosa Parks. I heard of Martin Luther King, Jr. I met Rosa Parks in 1957 when I was 17. In 1958, I met Dr. King and these two individuals inspired me to get in trouble. And I've been getting in good trouble, necessary trouble, ever since."

While the Democrats were unsuccessful in persuading the House GOP leadership to let a bill on gun violence come to the floor, Lewis explained they helped inspire others fighting for sensible gun control. "They want us to do something," Lewis said of the demand for action. "More than 90 or 95 percent of the American people are saying, 'Pass legislation to stop the killing.' We've lost too many of our children, too many of our sisters and brothers, too many of our mothers and fathers. We've got to stop the killing."

Lewis was on Colbert to promote his graphic novel March, which retells the fight for civil rights leaders to walk across the Edmund Pettus Bridge as they marched to the Alabama state capital in Montgomery. Lewis explained that he did the book as a graphic novel because it's important to educate young people on our history.

When Lewis moved from Nashville to Atlanta he explained that he would attend Dr. Martin Luther King's father's church. "Sometimes, daddy King would be sitting in the audience, the father. And the son would be preaching. And the father would say, 'Make it plain. Make it clear. Make it real.' So when you use graphics it makes it plain, it makes it real."

Lewis himself was inspired by a comic book that was published when he was younger called, "Martin Luther King and the Montgomery Story." It was a 16-page comic book that became "a road map, it became the way in and the way out." He hopes that his book can similarly become a road map for another generation.

When Lewis talked about the march in Selma on that "Bloody Sunday," he said that he thought he would die on the bridge. But he survived and saw it as a message to continue to "get in the way" and "get in good trouble."

"Because I truly believe, when you see something that's not right, that's not fair, not just, you have to do something," Lewis said.

Lewis defended NFL football player Colin Kaepernick, who refused to stand for the National Anthem before games in protest of injustice, and has received a huge backlash from the right-wing as a result.

Colbert created a panel for the comic book that fans can download of the interview itself.

Lewis then proceeded to crowd surf. Earlier in the show "Mr. Robot" star Christian Slater walked into the crowd, and did it so Chris Geere of FXX’s "You’re The Worst" followed suit. When Colbert asked Lewis if he wanted to, Lewis said, "Yeah!" Colbert seemed to want to make sure Lewis knew what crowd surfing was, and asked, "You want to go into the crowd and—" and made a diving motion. Lewis still said, "Yeah!" and jumped up with a big grin on his face. The 76-year-old Congressman then jumped on top of the crowd as they hoisted him above their heads.