CNN pundit nails it: If you drain the swamp what you’d find at the bottom is Donald Trump 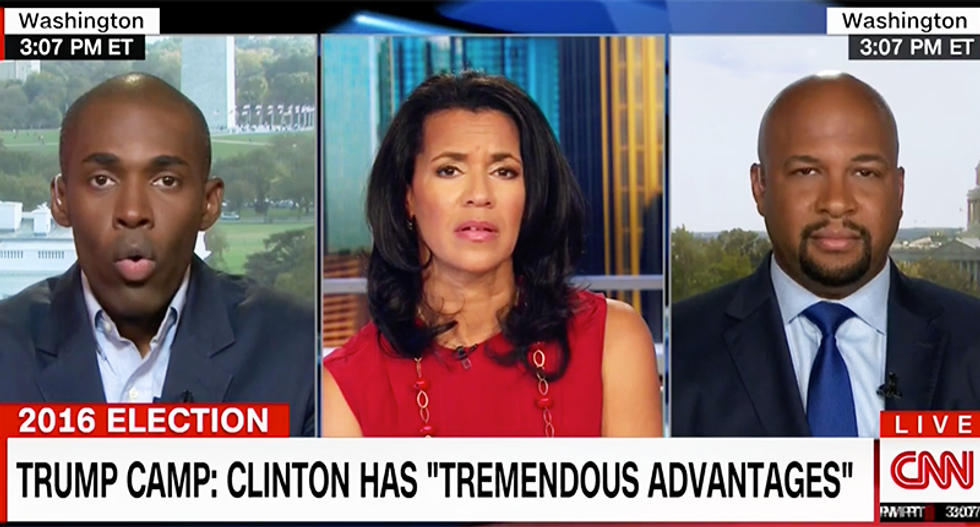 GOP presidential candidate Donald Trump has spent the last week campaigning about a complete overthrow of the United States government, blaming both parties. But one CNN pundit doesn't think Trump has any room to talk.

Clinton supporter Tharon Johnson remarked that Trump is criticizing his own running mate when he's attacking "Washington insiders" and politicians who have spent too much time in office.

"A running mate who spent 12 years in the Congress, was one of the most divisive members of Congress," Johnson said. "This guy was the sole person who led a crusade to try to defund Planned Parenthood. As my friend Paris [Dennard] said before, Donald Trump attempted to make a statesman-like speech," Johnson said, referencing Trump's infamous Gettysburg Address that might be the first shot in a civil war in the Republican Party.

Unfortunately for Trump, the first part of his speech were an attack on his accusers, not about policy or anything that would make America great again. It was all about him. The first on the list of "drain the swamp" ideas Trump has is to impose term limits on all politicians.

"Term limits are left up to the voters," Johnson explained. "That's why most have elections two and six years. If someone is not effective then members will vote them out. Let me respond to this really comical comment about draining the swamp. If you drain that swamp — what it's so laughable to me — you would find at the bottom of that swamp would be Donald Trump. You would see to the side of him his playbook of his campaign showing you how not to run a campaign to become president of the United States."

Dennard insisted that Trump wasn't attacking his own running mate, rather Trump was trying to tap into the anguish the American people have about Congress.

"The American people do not have a good feeling about the direction of the Congress," Dennard said about the GOP lead House and Senate. "They have very, very low approval ratings. When Mr. Trump talks about draining the swamp, he's talking about gettings rid of the toxicity in Washington, D.C. He wants to do that."

Something with which Indiana seems to agree.