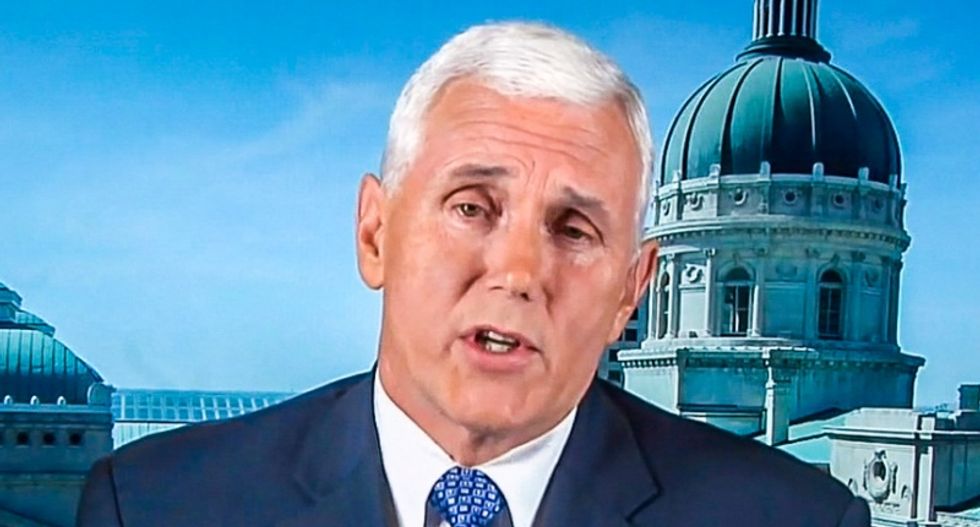 As Indiana Gov. Mike Pence readies himself to take the stage for tonight's vice presidential debate, he's going to have to contend with two major problems: 1. His running mate, Donald Trump and the fires he starts, in addition to 2. His devastating record leading Indiana. If Pence's record of PR failures is any indication, the night could result in disaster. Hopefully, at least, more people will know who he is, because this barber certainly didn't.

Here are the top seven things anyone should know about Mike Pence that could make him a liability on the GOP ticket.

1. Pence's rabid homophobia that led to the unbelievable and unprecedented backlash for the Religious Freedom Restoration Act. 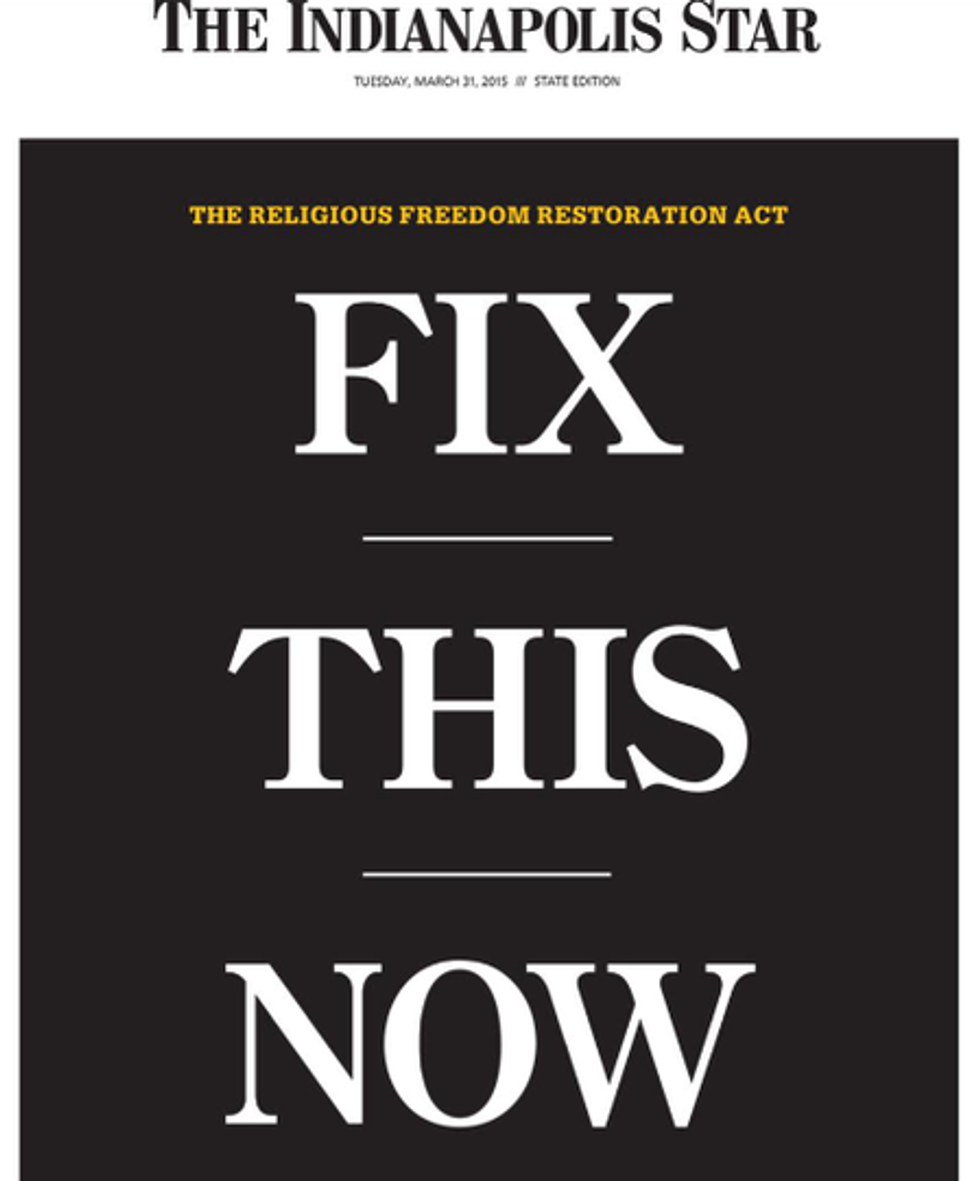 Mike Pence's epic homophobia is unimaginable in 2016. In his tenure as president of the Indiana Policy Review Foundation (IPRF), the group’s journal published a piece called “Military necessity and homosexuality.” Among other things, it cited fake studies and conspiracy theories to justify keeping LGBT people from serving in the armed forces.

While Trump pretended to be pro-LGBT, the choice he made for the man to serve as one blood pressure pill away from the Oval Office, is decidedly anti-LGBT. In fact, Pence is so anti-gay, he sunk his state's economy just to prove it.

Before there was North Carolina's bathroom bill, there was a Mike Pence-endorsed bill that gave "protections" to religious people who wanted to refuse service to LGBTQ people in the state. The problem in Indiana, however, was that Pence missed the cultural shift and underestimated those who would stand in opposition to him and his bill. Boycotts were called, conventions and speeches were canceled along with concerts, and the dollars were quickly draining from Indiana's tourism at a time when the state was already struggling financially. The CEOs of Yelp and Salesforce said they would reduce investment plans in the state and Apple CEO Tim Cook denounced Pence's law in an op-ed for The Washington Post.

"Our image. Our reputation as a state that embraces people of diverse backgrounds and makes them feel welcome...is at risk because of a new law," the editorial in the IndyStar read.

This is the person Trump chose to stand beside him after saying, “Ask yourself, who is really the friend of women and the LGBT community: Donald Trump with his actions, or Hillary Clinton with her words?" following the Orlando shooting that killed 49 people.

2. Pence took more than 2 months to respond when there was an outbreak of HIV in Indiana.

Mike Pence isn't a fan of people with HIV/AIDS. According to Sirius host and People for the American Way fellow Ari Rabin-Havt, Pence wrote about how disgusted he was with his own party, because they allowed HIV-positive people to speak at their 1996 convention.

Perhaps that is why when an outbreak of HIV rocked Scott County, Indiana, Mike Pence was nowhere to be found for 65 days, until he finally declared a public health emergency. It was just another contemptuous act in Pence's repertoire as the opioid epidemic began to take over the state. Clean needle exchange programs were illegal in Indiana, but the outbreak helped change GOP minds.

A major contribution to the HIV outbreak was the GOP's defunding of Planned Parenthood, which Pence launched. According to the Huffington Post, the Scott County clinic, along with four other Planned Parenthood facilities in the state, provided critical HIV testing and information. However, those clinics have been closed since 2011 after funding cuts to the state's public health.

In fact, Pence is so anti-choice, right-wing fundamentalist expert Jeff Sharlet called Pence the "most anti-abortion presidential or VP candidate we've had." So, Pence cut off his nose to spite his face and an entire Indiana county became a public health crisis.

Mike Pence is one of the Koch brothers' favorite elected leaders. Support from the Koch brothers and conservative donors are a major component in a presidential run, so having the major money people's favorite guy at your side if you're new to politics is certainly helpful for campaign cash. Americans for Prosperity has been holding up Mike Pence’s work in Indiana as a paragon of a good governor. Pence's former chief of staff now runs the Koch's political group Freedom Partners. Given the fact that the Koch's have pledged to spend $1 billion in the 2016 election to support conservative candidates, his ties could be an asset to Trump as he realizes his own financial limitations.

4. Pence lacks a basic understanding of the economy:

The IndyStar said it perfectly: "When you deal your state a crushing economic blow, when you seem incapable of understanding the role you have played in creating this mess — well, that makes clear that you are not in the right job."

Pence doesn't have the best record for the Indiana economy. He's had anemic economic growth. In fact, Indiana ranked last in economic job growth in the Midwest last year, and wages dropped from $53,500 in 2000 to $46,900 in 2013. Hoosiers are now making 86 cents for every one dollar the rest of America earns.

The worst part is he ascribes to the same failed "trickle down economics" theory that has bankrupted states led by other GOP governors, like Kansas and Oklahoma. As Kansas Governor Sam Brownback has proven time and time again: Tax cuts don't create jobs.

5. He's a terrible governor and everyone hates him:

When your own state hates you, chances are you're not going to bring a lot of value to the ticket. If you can't even guarantee a win in your home state, it might be time to update your Rolodex with lobbyists who can give you a cushy job.

An April 1 editorial from the IndyStar cites Pence's 12 years in Congress -- one of the most "partisan and dysfunctional" branches of government -- as one of his greatest weaknesses. It doesn't take a lot to see that the same rules don't apply when you take over as the executive of an entire state.

"That's where he belongs — in a place where a person can rise high by talking well and digging in and not really doing much," the editorial explains. "A place where, for the most part, you are not held accountable for results. Being a governor is different. It's about being a leader who is forced every day to think pragmatically, who knows that doing no harm is high on the list of requirements, and who understands that the job is at its core about making sure your state's people have a better chance of earning a decent living or getting a great education tomorrow than they do today."

Pence is simply not that guy.

If that isn't enough, his own party hates him and would really rather see him out of the state so that Indiana voters aren't reminded Pence is a Republican in November. With Pence as the GOP's nominee for governor, Democrats stand a better chance of capitalizing on his image problems and picking up the office.

In a recent revelation, Mike Pence is putting off giving a man wrongly convicted and proven innocent the pardon he has requested.

Keith Cooper served 10 years of a 40-year sentence after being misidentified by witnesses and a prison inmate agreed to testify against him. Ultimately, the inmate recanted his story, claiming he was pressured by police into doing it. The witnesses also conceded that the detective in the case pressured them as well, saying that they asked for other options than Cooper, but they were told he was “the right guy.” He wasn't.

Pence is holding back “out of respect for the judicial process," he claims, but the more likely reason is that if Pence grants him clemency, Cooper would be the first person ever in the state’s history to earn it. Pence probably wants to avoid being that guy. As a result, Cooper’s attorneys think he's is trying to push the decision off on another governor since he’s out of the office as of January.

Given that Democratic VP candidate Tim Kaine is a former defense attorney and Pence is refusing an innocent man a pardon, it could make Tuesday's debate interesting.

BuzzFeed has reported some of the things Pence wrote years ago and sent out as a candidate for Congress. “Time for a quick reality check. Despite the hysteria from the political class and the media, smoking doesn’t kill," an email read. Technically, he's correct, it's the cancer or emphysema you get from smoking that ultimately kills you.

If that isn't enough, Pence is nothing more than a glorified janitor cleaning up after the chaos and mayhem Donald Trump leaves in his wake. In his first major interview since the nomination, Pence spoke with "60 Minutes," trying to clean up Trump's PR nightmare surrounding the Gold Star Khan family. Pence also rolled back Trump’s blacklist of specific media outlets Trump said were writing unfavorable pieces. He managed to fix the cat fight between Trump and House Speaker Paul Ryan with his own endorsement. When Trump first began to say that he wouldn't release his taxes, Pence released his own, instead, hoping people would simmer down. They didn't. So, Pence promised Trump would release his taxes, just not until after the November election. It still didn't work. Pence even admitted to a Fox News host that he was pretty much the clean-up crew.

In the end, when your own party doesn't want you and your own state is happy to see you go, chances are, you're not the best option for a VP spot. That said, Trump had a small list of people willing to do the job.