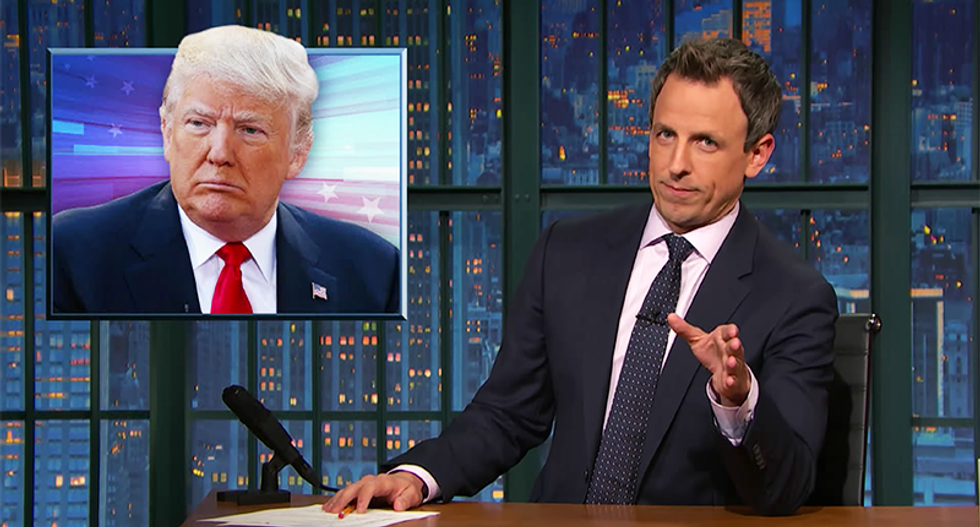 As the disappointing disaster of Donald Trump's business and financial life become more and more known, one picture is beginning to develop and that is that his own arrogance has cost him more than what he's donating to his campaign.

Trump certainly "underestimated the incredible amount of public scrutiny he'd get as a presidential candidate," Seth Meyers told his "Late Night" audience Tuesday. "Now that scrutiny may be hurting him in the place he cares about most: his wallet."

Meyers played a speech from early October in which Trump admitted that he once use to get favorable publicity but now things are a little more difficult. "My life was so simple," Trump admitted. "I had a beautiful simple life."

"That, of course, is a line from the Donald Trump movie, 'It's a Beautiful Simple Life. So Beautiful. Like You Wouldn't Believe, The Simplest And Most Beautiful Life. Everybody Says So,'" Meyers joked. Interestingly, in that film, every time a bell rings, a Victoria's Secret angel gets groped.

It seems so long ago, but "remember, before he became a presidential candidate, Donald Trump was a blustery New York City businessman known mostly to voters not for the person he was behind closed doors but for the character he played in tabloids and on TV?" Meyers asked. As it turns out, that guy no longer exists.

Thanks to over a year of certainty, the campaign "unearthed, for public view, all kinds of deeply unflattering information about Trump's business record, from his six bankruptcies to his loss of nearly $1 billion in 1995," Meyers explained. Everything from his six bankruptcies to a nearly $1 billion loss in 1995. If that isn't enough, a New York Times report confirmed this week that Trump avoided paying millions in taxes by using a sketchy loophole that Congress has since outlawed. Trump, of course, blames Hillary Clinton for his use of the tax loophole, because she didn't ban those laws when she was one of 100 U.S. Senators or as First Lady.

The downfall isn't unique to only The Donald either, he's dragged his daughter Ivanka into the mess. Standing behind her father has prompted boycotts of her fashion and accessory line and public scrutiny into the way in which she's treated her workers while fighting for paid family leave. The luxury wasn't allotted to her workers until they had to fight her for it.

"There was also the impression that because Trump was wealthy that he must also be smart," Meyers continued. "But the image of Trump as a genius billionaire has also been undercut during this campaign. Most recently by his own campaign aides, who talk about him the way you talk about a child."

A New Yorker story revealed Trump's campaign manager Kellyanne Conway refrained from launching into a well-deserved tirade telling Trump, "You had these people saying, 'Delete the app! Stop tweeting!'" but instead, Conway would say to Trump, "Here are a couple of cool things we should tweet today." Conway went on to explain the positive thinking was like telling someone, "How about having two brownies and not six?" Meyers couldn't believe that this was considered a victory.

The only way to handle such a man-baby is by making all of the campaign's good ideas sound like they came from Trump himself. One donor even came up with a name for it: "Trump has the following personality," the donor told the New Yorker. "NIH-NFW, meaning 'If it's not invented here ... then it's no f*cking way."

Conway admitted she had to resort to going on television to communicate to Trump. They actually have to do interviews and then make Trump watch the interview so that he can understand them. By his campaign's own account, "Trump is a child who has to be manipulated to listen to his aides," Meyers explained.

Then there's the issue of his donations to charity. The latest story is one that Trump crashed a fundraiser for children with HIV/AIDS, went up on stage and was heralded by event attendees. He never donated a dime to the charity that night or any night. Trump actually took a seat from another donor that was on stage and sat there pretending to be a donor.

The Washington Post's David Fahrenthold has called hundreds of charities over the course of the last several months, doggedly seeking a charity that either Trump or Trump's foundation donated money to. So far, the results haven't been favorable for Trump. In fact, the foundation is now under investigation for allegedly using funds illegaly.

Then there was the time Trump served as principal for a day at a Bronx elementary school. At one point he handed the children a fake million-dollar bill as a donation to the chess team that was headed to a national tournament. The $1 million pledge actually turned out to be a $200 donation.

In the end, "the character Trump played in tabloids and on TV of a generous, intelligent billionaire has been undercut by his presidential campaign," Meyers said. Owners of buildings and hotels that lease Trump's name are ready to remove their gold letters and opt for something a little more classy.