Don Lemon slams Lewandowski for claim he won't be a 'swamp creature': 'What else do you call him?' 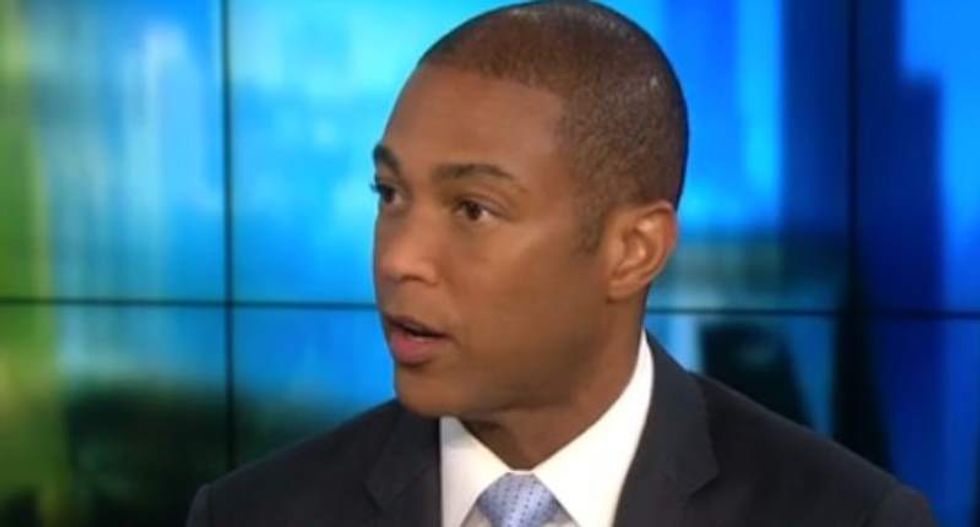 Don Lemon discusses his interactions with police on July 7, 2016. (YouTube)

Thursday, it was revealed that the president-elect owes $300 million to Deutsche Bank, which is under investigation by the Justice Department. If Trump doesn't pay the $300 million or Deutsche Bank doesn't settle their case with the Justice Department it could be that Trump's Attorney General will be overseeing the prosecution. While the bank announced late Thursday night it would settle some of the suit, the entire suit has not been settled.

The case is just the latest in a growing pile of problems the Trump transition and the Trump family is trying to shovel. While Trump said during the campaign that he would put everything into a blind trust, he has since walked back that promise. The Trump campaign has said that they intend to flush out the specifics but no plan has surfaced and the press conference was canceled that was supposed to outline the strategy.

"We're not seeing a lot of doing," Money and Economics reporter Patrick Gillespie said. "We're seeing, over and over with each new pick, a new conflict of interest. You have Wilbur Ross and has investments in U.S. Steel, and they could be putting tariffs on Chinese steel."

CNN analyst Jeffrey Toobin remarked that Carl Icahn, the new regulatory czar, owns a refinery. The second he was named to the post his stock shot up because people assumed regulations were going away.

"I think, with at least some of the cabinet appointees, there are laws with what they must disclose and deal with their contacts," Toobin said. "The president, and this is an important point to make, the president is not covered by these rules. So, it's only a political problem for the president, it's not a legal problem."

Toobin said that because there are no laws about this, Trump could have two desks in the Oval Office. One desk could be for the presidency and the other for the Trump Organization. The problem is only a political one.

"It raises so many questions about how diplomacy will deal with the administration, with business, or are former diplomats going to feel pressured to stay at the Trump Hotel in DC?" Gillespie wondered. "Will companies feel they need to peddle interests with his commerce secretary, with his state secretary pick Rex Tillerson. He has influences in Russia. Is that going to influence his decision making? Are these leaders going to use their new power to use that for decision making that will benefit the American people or deepen their own pockets?"

"In other words, he put his relationship with Donald Trump up for sale," Lemon said. "This is a quote from him. 'I will not be a swamp creature.' What else can you call him?"

Toobin said that the idea of "drain the swamp" has become a joke.

"Also, when you think about how much Donald Trump criticized Hillary Clinton for the pay to play situation, that, you know, people paid -- they contributed to the Clinton Foundation and sought meetings with the State Department, which they didn't get," Toobin said. "Now we have situations like Ms. McMann, who gave millions of dollars to Donald Trump's foundation, getting appointed head of the small business administration. We have other campaign contributors and big money people getting apparent rewards. It does seem like pay to play."

"It's not really draining the swamp, is it?" Lemon asked "Vanity Fair" reporter Emily J. Fox. "By listening to our conversation it sounds more like the 'Wizard of Oz."

"It's taking a big cannon ball into the swamp instead of draining it," Fox noted.

In the second half of the segment, the panel noted that the definition of "drain the swamp" seems to have shifted to something else. Lemon asked if the press conference Trump promised was ever even going to happen or if it was going to disappear just like his tax returns. We have no way of knowing.