Seth Meyers shreds Trump’s pick for State: ‘When they drained that swamp there was oil at the bottom’ 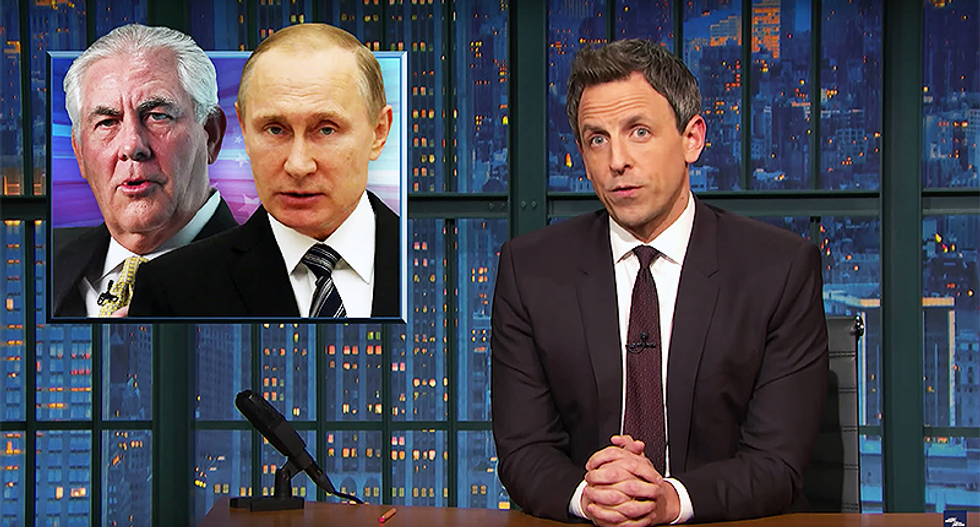 Seth Meyers is not happy about President-Elect Donald Trump nominating Exxon Mobil CEO Rex Tillerson to be the Secretary of State. The "Late Night" host railed on the pick in his latest "Closer Look" segment, noting, "I guess when they drained that swamp there was oil at the bottom!"

Meyers found an old video of Trump at a small campaign event in February in which Trump proclaimed, "My weakest supporters are very rich people. Isn't that funny? I don't get along that well with the rich. I don't even like the rich people that much. It's, like, a weird deal," Trump claimed.

"Isn't that funny? The people that know me best, hate me?" Meyers joked, doing his Trump impression. "That a weird coincidence. Trump says he doesn't get along with the rich and won't cozy up to special interests. So, who did he pick for Secretary of State?"

Meyers cited the questions that have risen about Tillerson's ties to Russian President Vladimir Putin. He played a clip of Trump's campaign manager Kellyanne Conway attempting to downplay Tillerson's connections.

"It's not like Vladimir Putin and Rex Tillerson are pounding down vodkas at the local bar. They're not intimate friends," Conway said of the man Putin awarded The Order of Friendship honor.

"So, Trump nominated a wealthy CEO with ties to Russian oligarchs," Meyers explained. "And Tillerson is just the latest edition to a cabinet full of millionaires and billionaires that was already worth a total of $14 billion. Now another frequent line you might remember from Trump's campaign is that he would not be beholden to wealthy donors because he would be self-funding his campaign."

Meyers played a clip of Trump saying he didn't want lobbyists or special interests. Trump claimed he didn't want their money and he would turn it down. In fact, he swore that he already turned it down and was "like, such a stupid person" for doing so.

Trump has already appointed six of his major donors that gave him a total of $12 million during the campaign. This after Trump railed against Wall Street and, specifically, Goldman Sachs.

"You'll never guess who he chose to fill the two most important economic jobs in his administration," Meyers said. Trump obviously nominated a Goldman Sachs executives to be his Treasury Secretary. "[Steve] Mnuchin isn't just any banker, he's the elite of the elite. For example, he founded dune capital management, a hedge fund named after the dunes near his beach house in the Hamptons. Drove a Porsche in college and a classmate once told Mnuchin, quote, 'You put the douche in fiduciary.'"

Meyers explained that it isn't just that Trump's picks are rich, it's that their records don't suggest they'll be champions for working families.

Meyers also called out Trump's Labor Secretary choice, the CEO of Carl's Jr., who is known for opposing a minimum wage increase and wants to replace human workers with robots. Meyers thinks that Trump only appointed him because his commercials had attractive women in them.

"He also appointed an EPA chief who doesn't accept the scientific consensuses on climate change," he began. "And has reportedly chosen Texas Governor Rick Perry for Energy Secretary. Now, the Energy Secretary is, among other things, responsible for safeguarding the nation's nuclear weapons. So, you need to know what your doing. Our current Energy Secretary, Ernest Moniz, is a world-renowned nuclear physicist. But in Rick Perry's defense, he wears glasses. And that means he's smart. Right, Donald Trump?"

Meyers played a clip of Trump saying that he noticed Perry put on glasses so people would think he was smart and that it wouldn't work. "You know, people can see through the glasses," Trump said. Interesting.