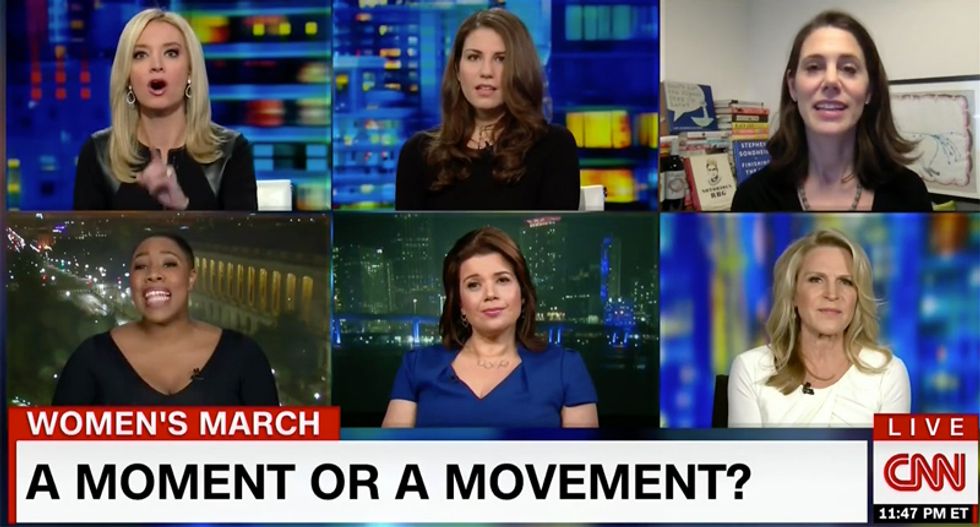 A CNN discussion on Sunday's women's march on CNN went from congenial agreement to rancorous shouting when conservative Trump advocate Kayleigh McEnany twice got into it with liberals on the panel over the reasons for the march.

McEnany enraged a few members of the all-female panel during a discussion on anti-choice groups feeling they weren't welcome at Sunday's march, as the Trump backer pushed back at comments from Democratic consultant Symone Sanders.

"How so, Kayleigh?" Sanders interrupted.

"No, I listened the whole time!" McEnany shot back. "The pro-choice groups are the ones limiting the right to life for millions of unborn babies who are slaughtered to the tune of half a million each year. Those are the groups who are rolling back the rights of women, and you want to talk about this [Trump] administration rolling back the rights of women? No. Not so. This administration wants to put in place paid maternity leave."

"It's easy to go out there and scream about Trump being anti-women or wanting to take away your rights. but name for me the right that Trump wants to take away from you," McEnany challenged.

"To your point, the fundamental and constitutionally enshrined and protected right to choice," CNN contributor Rachel Sklar patiently explained to her. "The single most critical thing that a woman can do for her own economic autonomy is to have a child, and that should be the choice of a woman for a whole host of reasons."

"But to say that the pro-choice is movement is limiting the rights of women is a complete 'alternative fact,'" Sklar continued, tweaking McEnany with Kellyanne Conway's new terminology for Trump lies.

"I'd like to note that Donald Trump on the campaign trail definitely said that women should be punished for having an abortion, and then today, he signed legislation that totally codified the things that he said on the campaign trail, that demonstrated that he is not here, quote, 'for the rights of women,'" Sanders explained to the Trump backer.

Later in the segment, McEnany disagreed with Sklar when she noted that the pink "pussycat hats" worn by women during Sunday's march were a rebuke to Trump over his comments that he felt free to grab women by their "p*ssies."

"That's not what it was," McEnany complained again. "42 percent of women turned out and voted for Trump."

"You wait, hold on," an exasperated Sanders said as she jumped in. "53 percent of white women voted for Trump. Latino women and black woman were not voting for Donald Trump. Let's be very clear here, it was white women who elected Donald Trump. The second thing is this march sent a message, not to Donald Trump I think, it was to Democrats. It was letting them know that there are people out there in the streets who are ready for change."