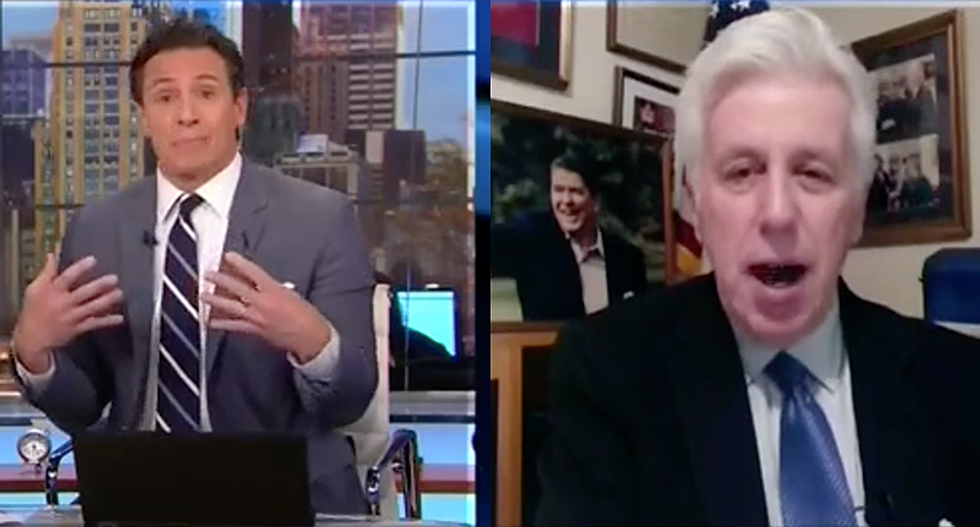 A conversation between CNN's Chris Cuomo and conservative pundit Jeffrey Lord turned into a shouting match as Cuomo demanded Lord give him evidence that refugees are a threat to American security.

The discussion surrounded supporters of Donald Trump in Pennsylvania who want to see tighter restrictions on refugees. Cuomo asked panelist Salena Zito if those voters understand what 2-year process entails for refugees or if they know the track record of attacks on Americans by refugees. She explained that they likely do not.

When Cuomo turned to Lord to discuss Trump supporters. Lord corrected Cuomo saying that Trump's immigration ban was not a "Muslim ban." Cuomo was quick to tell him that Trump himself called it a "Muslim ban" and that advisor Rudy Giuliani was asked to find a legal way to create a "Muslim ban."

"You can't defend the ban on the basis of fact, Jeffrey," Cuomo told Lord. "You can't do it because the threat doesn't exist from the groups that are being banned right now. You know this. You heard the stats. I get that people are afraid because you are making them afraid, but I don't get where the threat is articulated in fact to encourage this ban."

Lord tried to say that these are people that are fearful after 9/11 and San Bernardino but Cuomo cut in and explained that Trump's ban would not have stopped the 9/11b or San Bernardino attacks.

Lord began repeating Cuomo's name over and over again and claimed that this is their "reality."

"But you are selling them a solution that wouldn't have saved them from those threats," Cuomo countered.

Lord repeated Cuomo's name again and again and claimed Trump wants to protect them and that's all that matters. "The fact, Chris, you are dancing around this," Lord said.

Cuomo cut in, "No, I think, honestly, I'm stopping the music to be honest with you."

Cuomo maintained that if Trump wants to keep people safe why they're not putting the countries the 9/11 attackers came from on the list. "Make me safe from the real threat, Jeffrey," he said. "If someone is trying to break into the house, don't take my house cat and throw it out the window. Stop the guy at the window!"

Lord claimed the real threat was from "radical Islamic terrorism" and ultimately told Cuomo, "we're not being attacked by a bunch of Episcopalians."

"Ahh, there it is. You just said it, there is a difference," Cuomo said, finally catching Lord in the claim that the ban does target Muslims.