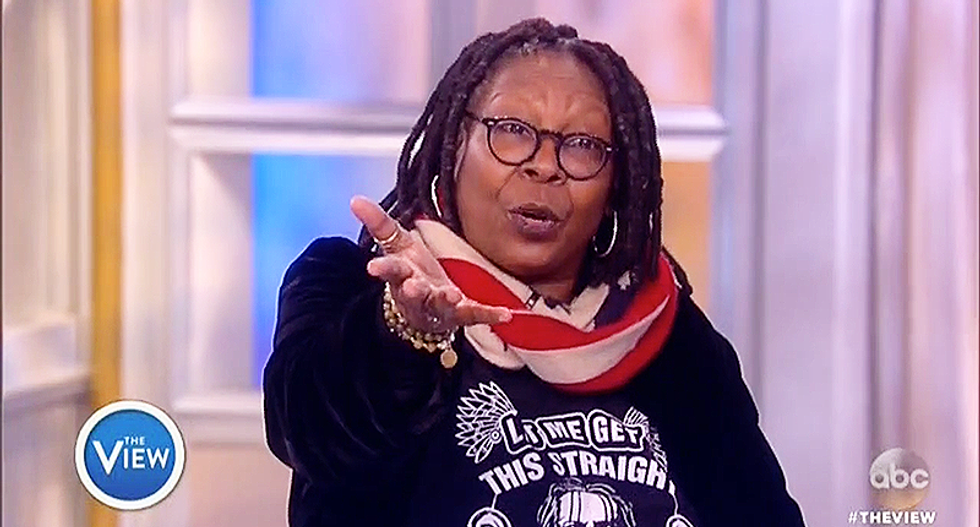 Whoopi Goldberg and co-host Jedediah Bila exchanged some words Wednesday morning on "The View," when Goldberg cited Bill O'Reilly's latest accusations that Hollywood is bullying President-elect Donald Trump and his famous supporters. The accusations come after the Trump Inauguration Committee has struggled to find anyone to perform at the Inauguration ceremonies.

"There's reverse McCarthyism going on in the entertainment industry," O'Reilly accused. "In the 1950s, Wisconsin Sen. Joseph McCarthy started accusing people in Hollywood of being communist, that led to a blacklist, where people weren't hired because McCarthy smeared them. Today, it seems anti-Trump zealots might be doing the same thing. If you're a Trump supporter, you're a bad person. Some entertainers think their careers will be harmed by associating with Trump."

"If you don't vote for people who don't support you probably won't get turned down as much," she said. "I know that one of the people that supported Donald Trump was Ted Nugent. So, why isn't Ted Nugent performing? He's one of your big supporters. When you say things like, 'We don't need Beyonce to come out for us we got the people.' That's what you said, Donald Trump. Stop going after the lefties to come perform if you think it's going to be an issue. Go after the people who supported you."

Bila said that the problem is not that Trump is not allowing his own supporters to perform at his inauguration – the problem is that Hollywood that leans left.

Goldberg quickly cut in and said that it wasn't the point at all. "If you want people to support you go after your supporters, don't go after the people who clearly did not support you and label them as being bad," she continued.

Co-host Joy Behar argued that the real sin of O'Reilly's statements was to compare people not wanting to perform for Trump to "McCarthyism."

"People's lives were destroyed," Behar said, as a reality check. "I don't think anyone is going to commit suicide because Garth Brooks doesn't want to strum on his guitar. I mean, people committed suicide. And by the way, he neglected to say that McCarthyism was directed to the left. To the liberals. This isn't the same thing. Nobody's life is being threatened."

Bila cited a conservative group in Hollywood called "The Group of Abe" that supports Republicans. She explained that these entertainers feel that their jobs would be in jeopardy if they were to voice their support for Trump or conservative principles. That said, Singer Andrea Bocelli’s own fans threatened a boycott if he performs at Trump inauguration. Not record companies or Hollywood.

Goldberg asked if she would name someone and Bila refused. "You can't make those kinds of statements!" she exclaimed. "Listen, Elisabeth Hasselbeck sat on this show for a thousand years. She took so much flak from people she stood strong and she stood up. This is BS! It's BS."

She cited conservatives like Kelsey Grammer, who has been a conservative forever and yet Grammer doesn't work with Scott Baio, and the two of them are conservatives. People like Scott Baio don't get work because of many many other reasons, but not because of politics.

Bila tried to claim that on awards shows you see the left on full display, but Goldberg again said that it wasn't the point.

"That's not the point!" Goldberg exclaimed. "What he's saying is that people are afraid to come out and say -- I'm telling you — that's a different — to me that's a very different thing. When you're talking about people coming to do the inauguration which is what he's talking about and when you say it's like McCarthyism, I have to yell BS."

Behar asked why O'Reilly couldn't do a dramatic reading from Killing Lincoln if he's so concerned about entertainers performing.

Goldberg explained that she knows people in the middle and on both sides and "if you're not up for that specific job you're not going to get it." It has nothing to do with politics.