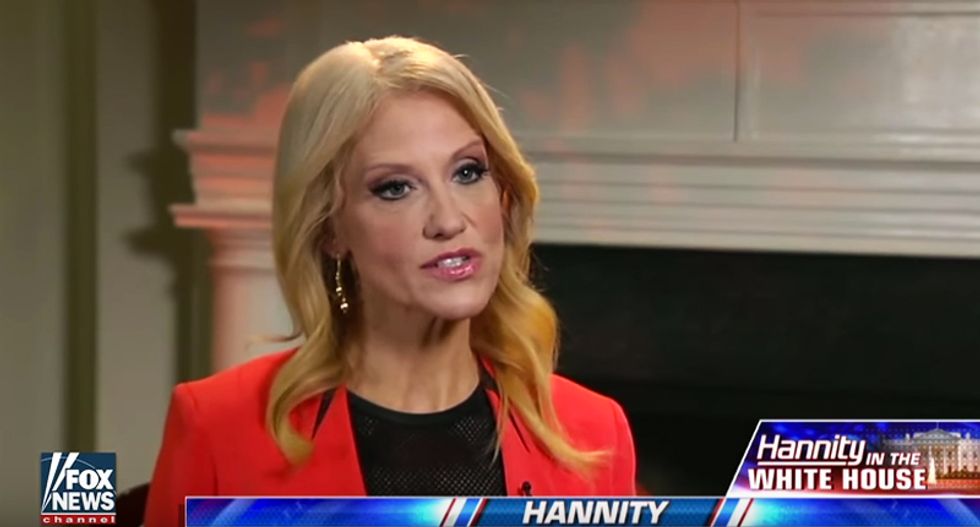 Spurned by CNN, Pres. Donald Trump's senior counselor Kellyanne Conway has turned to Fox News to air her grievances against the mainstream media and the "haters" who continue to mock her "Bowling Green Massacre" gaffe from earlier this week.

In a Saturday night preview of her Sunday appearance on Fox News' Media Buzz with Howard Kurtz, Conway insisted that she misspoke by one word when she accused the media of covering up the "Bowling Green Massacre" for political reasons.

Many of her critics are just "haters," Conway told Kurtz in an interview taped Saturday.

The Iraqis arrested in Bowling Green, Kentucky for attempting to smuggle weapons to Iraq were "masterminds," she said. "I had said that before. I should have said plot or I should have just called them terrorists."

"I clarified immediately," she said, apparently referring to a now-deleted tweet from Friday. "I should have said terrorists and not massacre.”

“I’m sure it will live on for a week,” she complained.

Conway has been widely mocked for the remarks as well as her contention last week that lies press secretary Sean Spicer told from the White House briefing room about the size of Pres. Trump's inaugural crowds were "alternative facts."

On Tuesday, the Trump administration announced that it would no longer be sending spokespersons to speak to CNN on the air because the network "does not promote" Pres. Trump's agenda.

By Saturday, Conway was asking to appear on CNN's State of the Union, a request that the network denied.

Press critic and media watchdog Jay Rosen has suggested that news networks should stop allowing Conway to appear at all.

Given Conway's habit of openly lying and muddying the waters without giving any actual illumination into her boss' actual views, Rosen said, there is no journalistic value in having her appear.

“Just be real about it and say, ‘This isn’t actually of journalistic value,’” he said. “‘It has a different value and that’s why we’re putting it on the air.’ Just don’t pretend that this is a normal interview, with the normal rationale.”