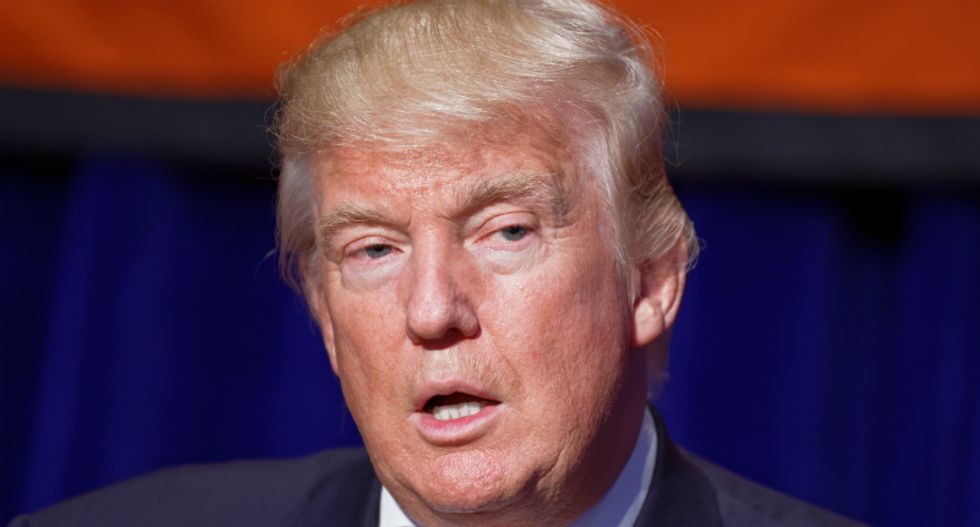 President Donald Trump and Republicans in the U.S. House of Representatives may be celebrating their successful passage of the American Healthcare Act (AHCA) on Thursday, but the White House's victory lap is "already grinding to a halt," according to a Sunday night report at Politico.com.

As the House's bill meets an uncertain fate in the Senate -- some Senate members have made it clear that they intend to rewrite the House bill so as to render it unrecognizable or destroy it altogether -- the White House is headed straight toward the "political buzzsaw" that is the investigation into allegations that the Trump 2016 campaign colluded with Russia to tamper with November's elections.

"Meanwhile, the health care bill that the White House spent the weekend celebrating appears destined for the trash can on the other side of the Capitol," wrote Politico's Matthew Nussbaum.

Maine Republican Sen. Susan Collins told ABC's "This Week" on Sunday that the Senate won't even look at the House bill as it constructs its own attempt to "repeal and replace" the Affordable Care Act (ACA).

"First of all, the House bill is not going to come before us,” Collins said. "The Senate is starting from scratch. We're going to draft our own bill. And I'm convinced that we're going to take the time to do it right.”

Meanwhile, Democrats are blasting Senate Republicans for including no women in its committee to draft a bill that directly affects child care, women's healthcare funding and reproductive freedom.

“The GOP is crafting policy on an issue that directly impacts women without including a single woman in the process. It’s wrong,” wrote Sen. Kamala Harris (D-CA) on Twitter.

Democrats are also attacking the House bill on the grounds that it hasn't been scored or vetted by Congressional Budget Office (CBO) since it was amended. Speaker of the House Rep. Paul Ryan (R-WI) clumsily insisted that it has been vetted -- echoing his embattled spokeswoman AshLee Strong's phony spin from Saturday -- on Sunday's edition of "This Week."

"(E)ven as senators have been pressing the brakes," wrote Nussbaum, "some in the White House"  like Chief of Staff and former RNC Chairman Reince Priebus are demanding "fast action" on the Obamacare repeal.

The double-punch of Flynn's news from late last week and the announcement by French President-elect Emmanuel Macron that his campaign was hit with a "massive hack" operation akin to the one deployed against the Democratic National Committee during the 2016 race, left Republicans facing stiff questions about Russia on Sunday when they would rather have been celebrating the House bill -- which is poised to strip health coverage from an estimated 24 million Americans.

Early on Sunday, Trump attempted a pre-emptive inking of the waters around Monday's testimony by Yates and the ongoing Russia investigation by tweeting, "When will the Fake Media ask about the Dems dealings with Russia & why the DNC wouldn't allow the FBI to check their server or investigate?”

There are rumblings in the capital and beyond that two grand juries have been secretly empaneled to investigate the Trump campaign's ties to Russia and a second investigation involving Russian organized crime and money-laundering.

Under Rule 6 of the Federal Rules of Criminal Procedure -- which outlines the legal parameters, structure and regulations of a federal grand jury -- all grand jurors, interpreters, court reporters, operators of recording devices, transcriptionists, government attorneys and "person to whom disclosure is made under Rule 6(e)(3)(A)(ii) or (iii)" are under orders not to disclose any matters occurring before a grand jury.