'You should fire your press person': MSNBC's Velshi and Ruhle obliterate Trump backer in insane interview 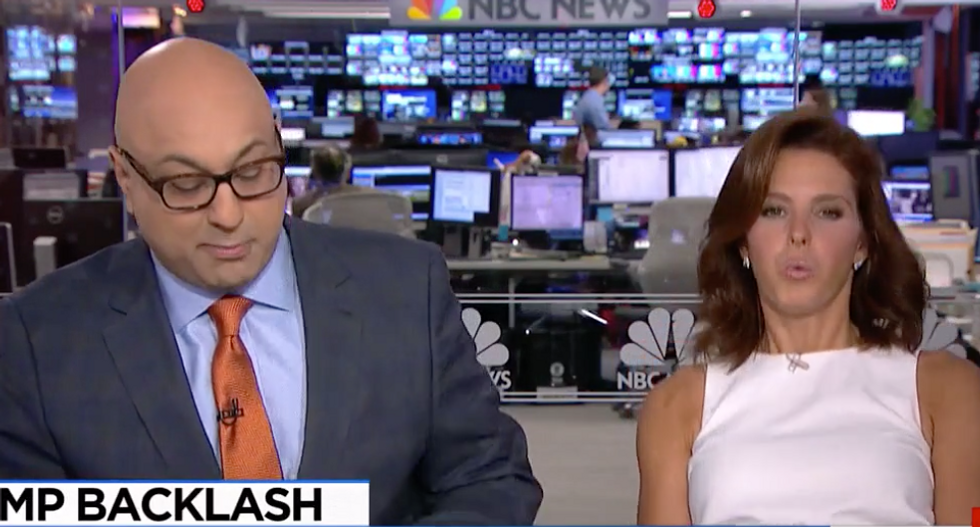 MSNBC hosts Ali Velshi and Stephanie Ruhle on Thursday schooled Brad Thomas, a member of the Donald Trump for President advisory board and author of The Trump Factor, after he tried to lecture them on the economy under Trump.

Velshi and Ruhle asked Thomas about reports that Gary Cohn, chief economic advisor to Trump, is “disgusted” and “upset” over the president’s Charlottesville remarks and is considering leaving the administration. Those rumors, Velshi and Ruhle pointed out, are causing the stock market to drop.

“Business leaders across industries have said, ‘Mercy, we’re out,’ so where’s the selling point for President Trump now?” Ruhle asked.

“There is nothing Donald Trump has done to cause the market to be where it is,” Velshi said.

“You guys keep peddling this myth that Donald Trump is responsible for this market,” Velshi later pressed. “Do you give Barack Obama credit?”

“Right now, the commander in chief is Donald J. Trump,” Thomas replied. “And what we’re seeing now is job creation. Donald Trump has created over one million jobs”

“Brad stop it, for heaven’s sake!” Velshi shot back, pointing out that Trump is “not even close to being the largest job creator in the first six months of his presidency.”

“Why do you continue to say these things?” he asked.

Thomas then went on a tangent about Trump being the “number one catalyst,” circling back to the debunked claim that Trump is creating jobs.

“But you just deny it and go on to say other things,” he continued. “Let’s talk about infrastructure, I can go down this road with you as well.”

Velshi asked what about Trump’s executive order on permitting will help U.S. infrastructure, prompting Thomas to claim, “it’s just very complicated, and I know this is not your background.”

“What are you talking about?” Velshi asked. “It’s far more our background than it is yours.”

“You can't just lie on TV, Brad,” he continued. “I don't know if your people told you who you were coming on TV with but, you can't lie about the economy to us.”

Thomas replied that he’s “not lying about the economy,” before repeating his go-to insult that “the mainstream media doesn't want to talk about” the economy.

“That's not true, Ali and I talk about it all of the time,” Ruhle replied.

“You should fire your press person,” Velshi added. “If they didn't tell you were coming on TV with Velshi and Ruhle … this is a silly conversation to have with us. You should go to other people's media and say these things but not to us, we cover this every day in and out. And the fact is those CEO’s got pressure sure from their shareholders, boards and customers who say, ‘We can't stand next to this president who is embracing neo-Nazis.’ How is that good for business?”

“As I said earlier, I think the most significant piece of this is job creation,” Thomas replied. “I'm going to stay on that.”

Ruhle later invited Thomas back on in six and a half weeks to discuss White House’s promise of a tax reform bill, a pipe dream according to sources within the administration.

“Can you watch some of our show so you don’t come here and say the mainstream media doesn’t cover this stuff?” Velshi asked. “Because we really, really do I’ll send you some links.”